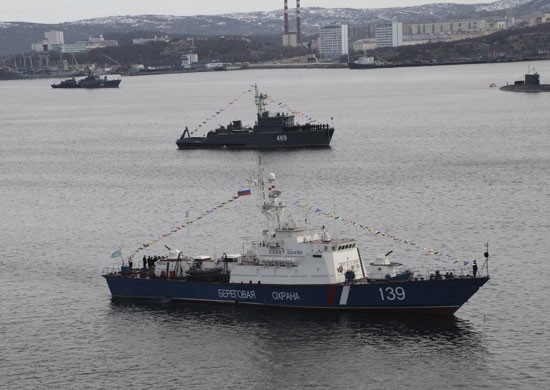 After more than 9,000 miles of sailing and 10 exercises, a group of Northern Fleet vessels sails into the Barents Sea where it engages in joint action with coast guard ships.
Read in Russian | Читать по-русски
By

The flotilla headed by destroyer «Vice Admiral Kulakov» has been all the way to Russia’s Pacific coast where it took part in the Vostok-2018 exercise. It has twice made it across the Northern Sea Route and encountered tricky weather and icy conditions in the East Siberian Sea. Underway, the ships have engage in combat training more than ten times, including in the waters around the New Siberian Islands.

After more than two months at sea, the vessels are soon back in the Kola Peninsula. But there is still combat training to be done.

As the ships on Sunday made it into the Barents Sea, they teamed up with a group of ships from the FSB Coast Guard.

The joint exercise includes measures on secure shipping in the Russian economic zone, the Navy informs.

The Northern Fleet ships meet a Russian coast guard that is getting increasingly powerful. Several new ships have been included in the fleet and the number of responsibilities expanding.

A federal law adopted in 2016 gives the Federal Security Service the full prerogatives for law enforcement along the Northern Sea Route.

Included in the fleet of the coast guard are now also ice-class vessels capable of operating in the high Arctic.

The «Polyarnaya Zvezda» was included in the fleet in 2017 and significantly enforces the FSB Coast Guard’s capabilities in the western part of the Russian Arctic. It is 93 meters long, 15 meter wide and has a deadweight of 3,200 tons. Top speed is 20 knots and it can operate autonomously for up to 60 days.

The «Polyarnaya Zvezda» is the lead ship of Project 22100

And more is in the making. In the course of the year, a ship of the Purga class (project 22120) is to be delivered by the Almaz shipyard in St. Petersburg to the coast guards in Murmansk. It will have icebreaking capacities and cost almost 1,8 billion rubles (€26 million).