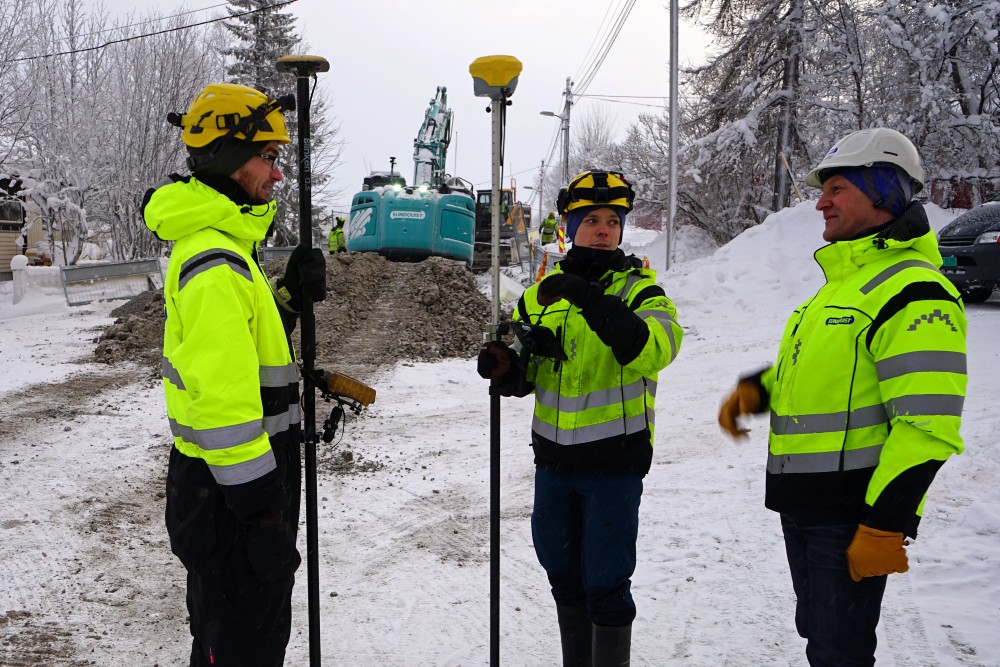 GPS data is essential in construction work. 10 cm wrong could force us to dig up and redo foundations, says Svein Sundquist (to the right). Photo: Thomas Nilsen

“It’s like being blind without notice, and then it is too late,” says engineer Andreas Wara Eliseussen with the contractor company AS Oscar Sundquist in Kirkenes.

He is interviewed by Norway’s TV2, this weekend telling the story about misleading positioning on GPS receivers for both construction workers and mobile phone services in the area around Kirkenes a few kilometers west of the Russian border.

“We are spending more efforts on building straight,” Svein Sundquist says to TV2. He explains how everything has to be doubled checked. That cause more time and increased costs. A few centimeters wrong and the excavator might have to dig up a water pipe and start all over again.

As previously reported by the Barents Observer, GPS signals have been interrupted in Norway’s border area to the Kola Peninsula five times since autumn 2017. At all occasions, aviation authorities have warned pilots in the area. In January, regional police officials voiced concern about search- and rescue troubles that could be caused if GPS signals are interrupted, both at sea and on land.

“This is disturbing the civilian society and we have to act,” says Chief of Police in Finnmark, Ellen Katrine Hætta, to TV2.

“What now happens is deeply worrying. I’m most concerned about this becoming a ‘normal’, something we have to accept. I believe we as a nation should in no way accept this,” she says.

The Chief of Police tells about several reports from people in the Kirkenes area experiencing instability when using map-services provided with mobile phones. Wrong positions have been up to one kilometer.

“Norwegian authorities have raised the questions through diplomatic and military channels,” acting head of communication with the Foreign Ministry, Kristin Enstad, said to the Barents Observer in January. Russia’s Oslo Embassy did not reply to comment on the issue when asked by the Barents Observer.

In Moscow, though, Foreign Ministry spokeswomen Maria Zakharova last autumn named the accusations “absurd” and denied any Russian involvement. According to Zakharova, western politicians have made it a habit to blame Russia for «all kind of incidents» without providing evidence.

Talking with the Barents Observer in Tromsø in January, Foreign Minister Ine Eriksen Søreide confirmed that she brought up the GPS-trouble with Russia’s Sergey Lavrov when they met for bilateral talks at the OSCE Ministerial Council in Italy last December.

Jamming has mainly happened at the times of military exercises, like the Zapad in autumn 2017 and the Trident Juncture in October, November last year.

There are several large military camps and exercise areas in the Pechenga valley, some few tens of kilometers into Russian territory on the Kola Peninsula.