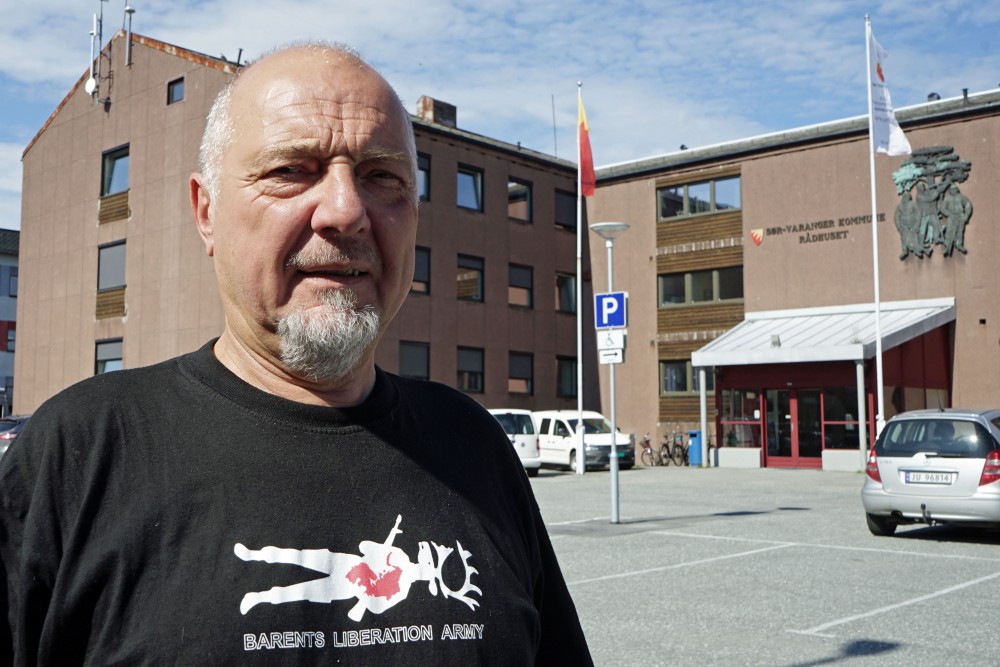 "I see this as part of a neighbour policy the Norwegian government wants. We have normal relations," says Kirkenes mayor Rune Rafaelsen who heads an official municipal delegation to Sunday's powerful show off in Severomorsk, the closed military town and headquarters of Russia's largest navy fleet. Locally, the visit is controversial.
Read in Russian | Читать по-русски
By

“This is a low-tension project we have,” Rune Rafaelsen (Labour Party) explains.

Amid rising NATO-Russia tensions, sharper rhetoric, larger military exercises in northern waters, sanctions on trade and travel, Rafaelsen and locals in Norway’s northeastern corner maintain contacts across the border to the Kola Peninsula.

“I have no big political ambitions with our contacts, that I leave for the defence minister and foreign minister,” he says.

Severomorsk is one of Kirkenes’ friendship municipalities.

Norway, like many other NATO member states, maintains a minimum of military-to-military contacts with Russia, mainly limited to border guard tasks and an annual search- and rescue exercise in the maritime border areas between the two countries in the Barents Sea.

“I have no illusions about what’s happening between East and West. More than half of the world’s defence expenditures are within NATO. I don’t lose my sleep over Russia’s weapons modernization,” the mayor assures. “It’s part of the game.”

“For a country like Norway, good neighbour policy is vital, in every area.  So, I want to go back to how it was before, with mutual observers at exercises, building trust. As a small municipality bordering Russia, we should not be the ones hindering dialogue, mayor Rafaelsen argues. He says contacts and cooperation means a lot to the people across the border, also in Severomorsk.

“But, it is not uncomplicated,” he admits.

Rafaelsen tells he discusses cross-border relation with the foreign minister, defence minister, diplomats, and even with NATO chief Jens Stoltenberg who frequently visited Kirkenes while serving as Norway’s Prime Minister. He, however, underlines that visting Severomorsk on the Navy Day is his initiative, and is not coordinated with Government officials in Oslo.

For the mayor, NATO is core to security in the north. “It would be impossible for me to make such visit to Severomorsk wasn’t it for Norway’s NATO membership,” he says.

Norway’s Ministry of Defence writes in an e-mail to the Barents Observer it has no comments on the matter of the Kirkenes mayor’s public visit to the Northern Fleet’s navy parade.

Why Severomorsk on the Navy Day with all weapons show off?

“Because we were invited,” Rafaelsen says.

Although most locals in Kirkenes welcome contacts with neighbouring Russia, the mayor’s choice of arena for maintaining cooperation is disputed.

Town Council member, and head of the Conservative Party, Eilif Johannesen says to the Barents Observer that people-to-people contacts and military events should not be mixed.

“Even though Severomorsk is our friendship city, I’m critical to the mayor choosing a naval weapons parade as meeting point for collaborative discussions with our friends,” Eilif Johannesen says.

“People-to-people cooperation with Russians is very important for Kirkenes, but this cooperation that contribute to lower tensions should not be mixed with military happenings,” Johannesen argues.

“Despite the sanctions policy we have had for nearly five years, we have managed to live in peaceful co-existence with our Russian friends. The mayor shouldn’t have chosen a military parade as venue for talks with our friendship municipality Severomorsk,” he says.

This is the second year in a row the mayor and his official delegation from Kirkenes vists the Northern Fleet’s main base on the Navy Day.

“I think it was rather interesting, I’d say, to put it mildly.”

Rune Rafaelsen shows a series of photos on his mobile phone from last year’s parade with submarines, warships, well-trained marines in the waters and shore areas just in the central harbor of Severomorsk.

Soldiers and officers from the Northern Fleet have participated in the wars in Eastern Ukraine and Syria, as previously reported by the Barents Observer.

This year, 35 warships will sail up front of the central harbour of Severomorsk, an overview published by the Northern Fleet informs. Among the vessels are the Northern Fleet’s only 4th generation strategic missile sub, “Yury Dolgoruky” which can carry 16 missiles with a total of 64 nuclear warheads.

Two other nuclear-powered submarines on display in the Kola Bay will be the Oscar-II class “Orel” and the Sierra-class “Pskov”.

The Northern Fleet submarines, normally playing cat-and-mouse with NATO subs outside the coast of Norway, will demonstrate spectacular maneuvers, including diving and surfacing in the bay just outside Severomorsk, the Navy informs.

Additional to showing military strength and combat maneuvers, the events in Severomorsk includes theatre, dance ensemble, the Northern Fleet’s orchestra and it all ends at night with a colourful fireworks.

“We will discuss joint cooperation,” Rune Rafaelsen tells about other plans when visiting the Russian Northern Fleet’s main base. A delegation from Severomorsk will be invited to Kirkenes on October 25th, when Norway celebrates the 75th anniversary of the Red Army’s liberation of Eastern Finnmark from German nazi-occupation in October 1944.