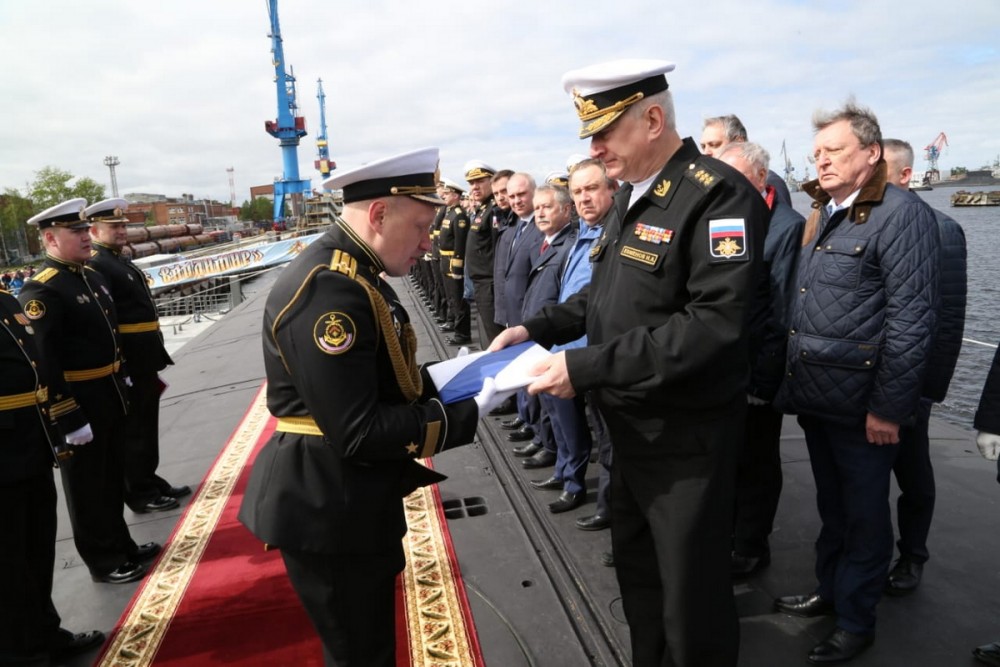 Russia's latest ballistic missile submarine "Knyaz Vladimir" was officially handed over to the Northern Fleet on Friday from the Sevmash shipyard in Severodvinsk, the city with the highest number of coronavirus-cases in the Arkhangelsk Oblast.
Read in Russian | Читать по-русски
By

The flag raising ceremony on June 12th was attended by numerous high-ranking officials and military commanders.

The ceremony took place at the quay of Sevmash, the shipyard in charge of building Russia’s nuclear-powered submarine.

June 12 is Russia Day, celebrating the declaration of state sovereignty of the Russian republic from 1990.

Simultaniously as the Russian navy was handed over its first new nuclear powered submarine since “Severodvinsk” and “Vladimir Monomakh” raided the navy flag in 2014, could regional health authorities in Arkhangelsk inform about the latest scary numbers of Covid-19 infections.

Severodvinsk is in the first place of infections in the Arkhangelsk Oblast with 1,605 cases, regional health authorities in Arkhangelsk informs. 1,163 of the infected people are employees at the local enterprises, mainly Sevmash and Zvezdockha naval yards, regional news online 29.ru reports on Friday.

The Vkontakte page monitoring the coronavirus situation in Arkhangelsk region reports about 42 new cases since yesterday, of which 32 are shipyard employees.

Due to the serious coronavirus outbreak in Severodvinsk, the city has been sealed off and closed for public access since last Saturday.

Judging from the photos of the ceremony, posted both by the Sevmash shipyard and the Defense Ministry’s press service, no special measures were taken to avoid the spread of coronavirus during the ceremony. Several tens of non-crew members went onboard the deck of the submarine standing in tight contact with each other, literarily shoulder-by-shoulder.

The “Knyaz Vladimir” is expected to sail out from Severdovinsk towards her new homeport Gadzhiyevo on the Kola Peninsula in the nearest future.

“Knyaz Vladimir” is the first of the upgraded Borei-A class submarines and the first new ballistic missile submarine delivered to the Northern Fleet since January 2013, when the “Yury Dolgoruky” entered service. The Russian navy signed the acceptance documents approving the submarine’s readiness on June 1st this year.

The acceptance document was a milestone for the submarine that originally was supposed to be handed over from the Sevmash yard to the Northern Fleet in 2017.

Technical problems, however, delayed both the construction and the commissioning. Last fall, the plan was to deliver the submarine by year-end, as the Sevmash yard in Severodvinsk celebrated its 80th anniversary. Further troubles, though, caused further delays.

In mid-May this year, “Knyaz Vladimir” sailed out to the White Sea on a final test voyage making sure previously discovered technical challenges were solved.

“The nuclear submarine component of the Navy is on the Russia Day replenished with a new, unparalleled in the world missile submarine cruiser. This event underlines the status of the Russian Federation as a Great Sea Power with an Ocean going fleet.” … “On the Day of the most important state holiday, which is today celebrated in our country, we have one more reason for pride - the modern Russian Navy, which can ensure guaranteed security of our Fatherland,” Admiral Evmenov said.