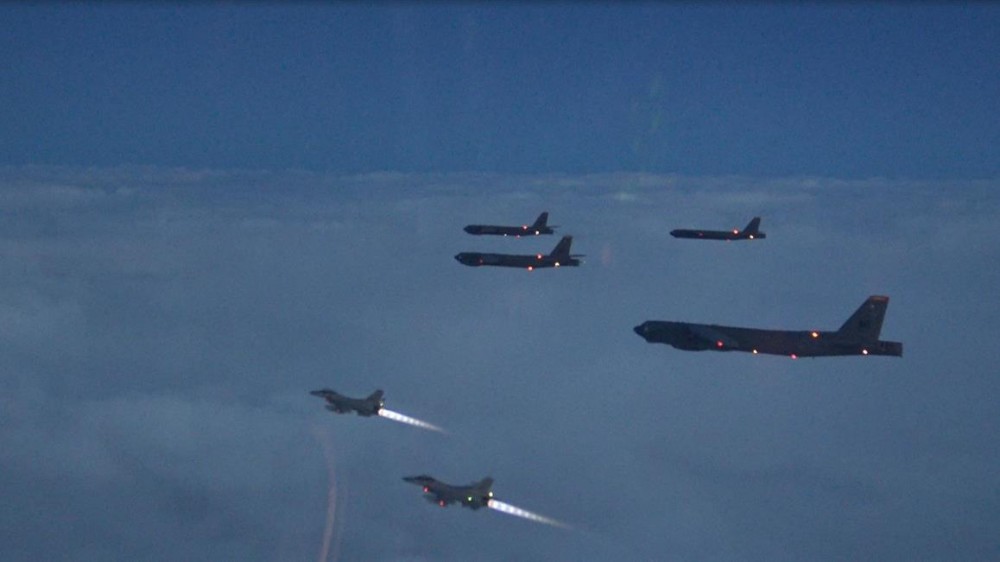 August 21, 2020 outside the coast of Norway. Photo: Norwegian Air Force

The U.S. long-range nuclear-capable bombers were met by F-16s from Bodø air base in northern Norway after a flight path across the Arctic.
Read in Russian | Читать по-русски
By

“I am very pleased that our American friends choose to practice in our surroundings. It is important that they are familiar with Norwegian conditions and can operate together with us if necessary,” said Norway’s newly appointed Chief of Defence, General Eirik Kristoffersen in a statement.

Both F-16s and the new F-35s will in the nearest future fly more in joint exercises with the U.S. bombers.

Late Friday night, August 21, F-16s from Bodø air base north of the Arctic Circle met the six B-52s outside Norwegian air space and flew in joint formation. The B-52s came from Minot Air Force Base in North Dakota and came across the Arctic en route Fairford air base in England where they landed early morning Saturday august 22. The flight path went north of Thule air base at Greenland and then south over the Fram Strait into the Norwegian Sea, waters of strategic importance for Russia’s Bastion defence concept in times of a potential military escalation.

The deployment of U.S. strategic bombers to Europe is no coincident. Global tensions are rising and northern Europe is increasingly a playground for showing military muscles in times of cross-border political distrusts between Russia and NATO.

On Monday, Sweden  raised readiness in the Baltic Sea and Gotland, due to ongoing comprehensive military activity by Russia and the the West not seen since the days of the Cold War, according to a statement by the country’s Chief of operations, Jan Thörnqvist.

Belarus’s military is in a state of high alert for the first time since the Cold War era as the country’s dictator, Aleksandr Lukashenko, claims security threats along the western borders to the European Union.

In the North-Atlantic, both Russian navy vessels and aircraft have had extensive presence, especially in the course of the the last few years. Simultaneously, U.S. long-ranged bombers have been on regular missions outside and over Scandinavian territories and in the European Arctic, including over the Barents Sea. This spring, a group of British and U.S. surface warships sailed into the western part of the Barents Sea for the first time since the 1980s.

6 American B-52 Stratofortress bombers trained together with Norwegian fighters. pic.twitter.com/jSWjVTngz7

According to a NATO statement, the US has conducted more than 200 Bomber Task Force sorties with Allies and partners since 2018. Most recently, this involved B-1B Lancer flights over the Nordic, Baltic, and Black Sea regions in May, as well as an air policing overflight of North Macedonia, NATO’s newest member. In June, B-52H Stratofortresses conducted flights over the Arctic Ocean, and later took part in BALTOPS, the largest annual exercise in the Baltic Sea, which brought together 3,000 personnel from 19 NATO Allies and partners.

Commander of U.S. Air Forces in Europe, General Jeff Harrigan, said in a statement the B-52s proves the ability to quickly respond to partners and allies requests “at a moment’s notice”.

He also said the current presence “will be a very active deployment.”

The Norwegian military says the current exercises is crucial for all parts of air operations and a test of Norway’s ability to coordinate operations across NATO’s area of operation, from control and surveillance to its ground personnel and aircraft.

Last joint training was in mid-June when Norwegian F-35s trained with American B-2 long range bomber to the northern parts over the Norwegian Sea and in early June outside Finnmark, Norway’s northernmost region, when at least six Norwegian F-16s and F-35s flew alongside U.S. B-52s.