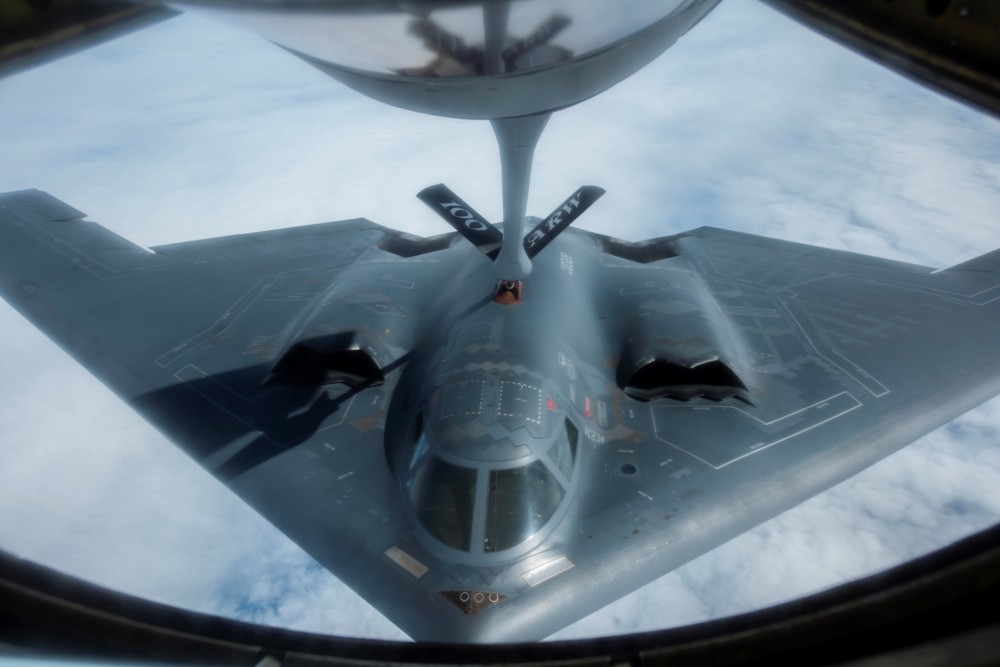 THURSDAY JUNE 18: A U.S. B-2 Spirit from the Whiteman Air Force Base in Missouri refueled mid-air with a KC-135 Stratotanker from England as part of the strategic bomber mission north of the Arctic Circle. Photo: U.S. Air Force / Airman 1st Class Joseph Barron

"The flights are clearly a part of a plan of geopolitical and strategic signaling," says defense analyst Per Erik Solli and points to Russia’s long-range navy and air force operations south to the North Sea areas.
Read in Russian | Читать по-русски
By

Two B-2 Spirit strategic stealth bombers were Thursday flying from an airbase in Missouri across the North Atlantic to the skies over the northernmost parts of the Norwegian Sea.

The origin of the planes belonging to the 509th Bomb Wing and indications of the flight patterns were confirmed by the public affairs office of the United States European Command.

As the long-range bombers approached international air space outside northern Norway, a pair of F-35s from the Norwegian Air Force teamed up.

“Operations and engagements with our allies and partners, in the Arctic region and elsewhere, demonstrate and strengthen our shared commitment to global security and stability,” General Harrigan said.

A British online forum for military plane spotters said the American B-2s were cleared to fly to about 70 degrees north, somewhere between halfway northeastern coast of Greenland and northern Norway. Exact flight patterns are not confirmed.

“It is natural to conduct joint training when our closest ally is operating near our areas of interest,” Eikeland says.

She says the two F-35s were flying rather far west in international airspace out from Nordland county over the Norwegian Sea to meet the B-2s.

Thursday’s mission fills into a clear and dramatic picture of geopolitical mistrust between NATO and Russia currently building up in the high north. U.S. strategic bombers have been on at least five joint missions with Norwegian fighter jets in the Arctic over the last seven months.

While the American long-range bombers on occasions fly further northeast into the Arctic, the Norwegian fighter jets avoid flying east of the maritime delimitation line in the Barents Sea. Like last November when three B-52s flew over international air space in the Barents Sea near some of Russia’s most strategical important naval bases on the Kola Peninsula. The Norwegian F-16s followed the American planes to about outside Norway’s northeasternmost town Vardø, while the B-52s flew further east.

A military expert talking to the Barents Observer believes we are witnessing a new ‘normal’ in regards to the military presence in the Arctic.

“The air force activity is a part of the emerging normal situation of US and European regular military presence in the high north,” says defense analyst Per Erik Solli.

He explains how these activities have multiple effects.

“The flights are always published and clearly a part of a plan of geopolitical and strategic signaling,” he argues.

Per Erik Solli is now an advisor for the Nord University in Bodø, previously for the Norwegian Institute of International Affairs.

He says what we now see is an answer to the Russians, who also have long-range operations.

“Russian naval ships and military aircraft operate at times as far south as the North Sea and the so-called GIUK-gap (Greenland-Iceland-United Kingdom) exercising their long-range military capabilities. On the other hand, the US seems to have established a pattern of demonstrating presence up to the so-called Bear-gap (Bear Island to North Cape),” Per Erik Solli elaborates.

Russia restarted to fly its Tu-160 and Tu-95 long-range strategic bombers along the coast of Norway in 2007 after a 15 years break following the collapse of the USSR.

Commander of the Russian Northern Fleet, Vice-Admiral Aleksandr Moiseyev announced a few weeks ago that his fleet of more than 30 surface warships, a few submarines and more than 20 aircraft of various types later in June will exercise in a large-scale maneuver in the Barents Sea, and, as he said it, «We will exercise individual events in the Norwegian Sea.»

The public affairs’ office of the United States European Command says they are ready to fly more in the Arctic.

“These bomber missions represent U.S. commitment to our allies and enhance regional security. We will continue to work with our Nordic allies and conduct Arctic missions to ensure mission readiness and interoperability,” a statement reads.