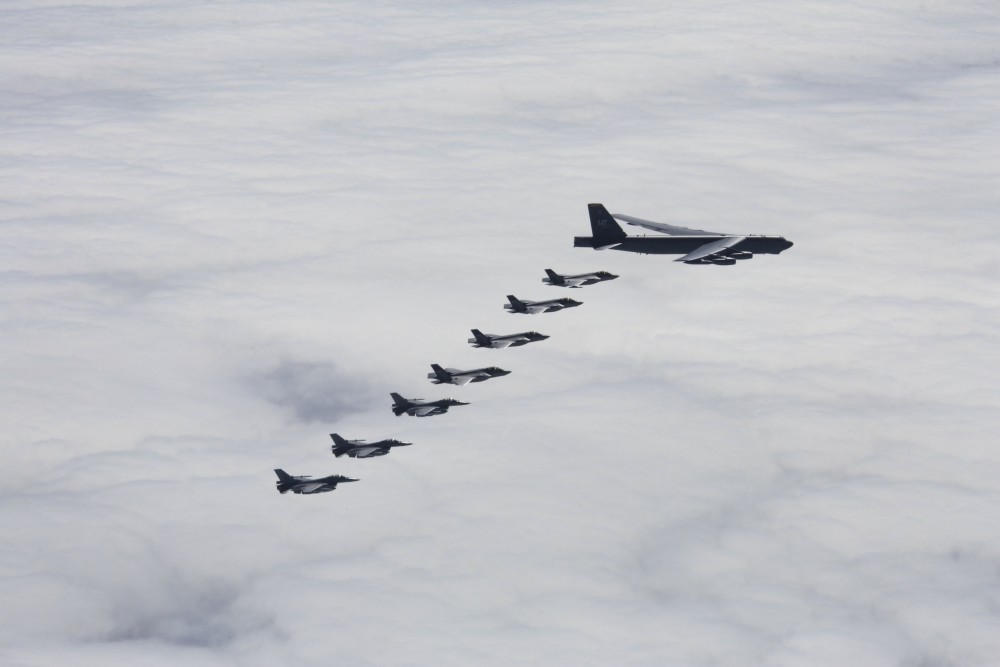 The NATO warplanes on June 3 were exercising in international airspace just outside Finnmark.
Read in Russian | Читать по-русски
By

At least four F-35s and three F-16s from the Norwegian Air Force were flying up north wing-by-wing with the huge American long-range strategic bomber, the Norwegian Armed Forces informs.

The exercise comes just two weeks after both Swedish and Norwegian fighter jets were flying together with a B-1B strategic bomber from the U.S. Air Force over Scandinavia.

The joint exercise on Wednesday this week went much further north.

“US is our closest ally. This deployment demonstrates US commitment to the defence of Europe. US forces need to conduct exercises in Europe with its allies to be able to defend Allied territories, including our national area of responsibility. Through this kind of integrated training between close allies, both our forces increase our ability to operate together seamlessly,” said Norway’s Chief of Defence, Haakon Bruun-Hansen, in a prepared statement.

In early May, a group of British and U.S. navy surface ships for the first time since the mid-1980s sailed east of North Cape into the Barents Sea following the same route as the B-52 and the Norwegian fighter jets. Like the navy warships, the aircraft operated over the waters which is Norwegian Economical Zone.

NATO Allied Air Command writes in a Facebook update that four B-52s were on mission in the skies over the Arctic this Wednesday.

“The flight involved missions over the Arctic Ocean and Laptev Sea,” the update reads. The Norwegian fighter jets did not follow all the way to the Laptev Sea, but followed the American bomber just outside Norwegian airspace.

Last fall, three B-52s were flying further east over the Barents Sea in international air space, but closer to Russian territory, both near Novaya Zemlya and the Kola Peninsula, as reported by the Barents Observer.

In a short note about long duration strategic bomber task mission throughout Europe and the Arctic region June 3, the U.S. Air Force in Europe writes “The Arctic is a strategic region with growing geopolitical and global importance, the U.S. Department of Defense is working with our Arctic nations and multinational and interagency public and private partners to maintain a secure and stable region where nations work cooperatively to address challenges.”

On Monday this week, the Commander of Russia’s powerful Northern Fleet, Vice-Admiral Aleksandr Moiseyev, said a group of 30 surface ships, some submarines and support vessels and about 20 aircraft later in June will conduct a large-scale exercise in the Barents- and Norwegian Sea.

Both Russian navy exercises west of North Cape in the Norwegian Sea and American long-range bombers flying inside the Arctic Circle in Europe seems to be the new “normal” for the developing geopolitical game in areas around Norway in the north.

On June 1st, Chief of the Main Operational Directorate of the General Staff of the Russian Armed Forces, Colonel-General Sergei Rudskoy, had a briefing were he assured his forces are “constantly monitoring and records the high level of military activity of the United States and its NATO allies near our borders.”

Col. Gen. Sergei Rudskoy stressed that the focus of the exercise is clearly anti-Russian.

On a big screen, the powerful Russian General showed a map detailing the U.S. and British navy group that sailed into the Barents Sea in early May. The map showed how the NATO ships, colored blue, stayed in the Norwegian economix sector of the Barents Sea, while the Russian navy ships, marked with red color, were following the NATO ships.

The Russian map also indicated two Norwegian intelligence ships, the “Marjata” and “Sverdrup II”, both sailing outside the Kola Peninsula where the Russian Northern Fleet has its strategically important bases for the nuclear-powered submarines.

According to Col. Gen.  Sergei Rudskoy, also an American nuclear-powered submarine sailed the Barents Sea at the time.

“During the exercise, the tasks of hitting objects on the territory of the Russian Federation and intercepting Russian ballistic missiles were worked out,” Rukskoy said at the briefing.

Elaborating on the American anti-ballistic missile (ABM) capabilities, Rudskoy pointed to the new Globus-3 radar under construction in the town of Vardø on Norway’s northerneastern coast to the Barents Sea.

“Work continues to build up the ABM infrastructure in Poland in addition to the US-deployed facility in Romania. All concerns regarding the possible deployment of Tomahawk cruise missiles at these bases remain. In addition, the Globus-3 radar station in Northern Norway, in the village of Vardø, is continuing to modernize its missile defence capabilities and expand its capabilities to monitor the interior of the Russian territory,” Colonel General Sergei Rudskoy said according to the Defense Ministry’s transcripts from the briefing.

Video: Russian bombers outside Norway for second time in a week