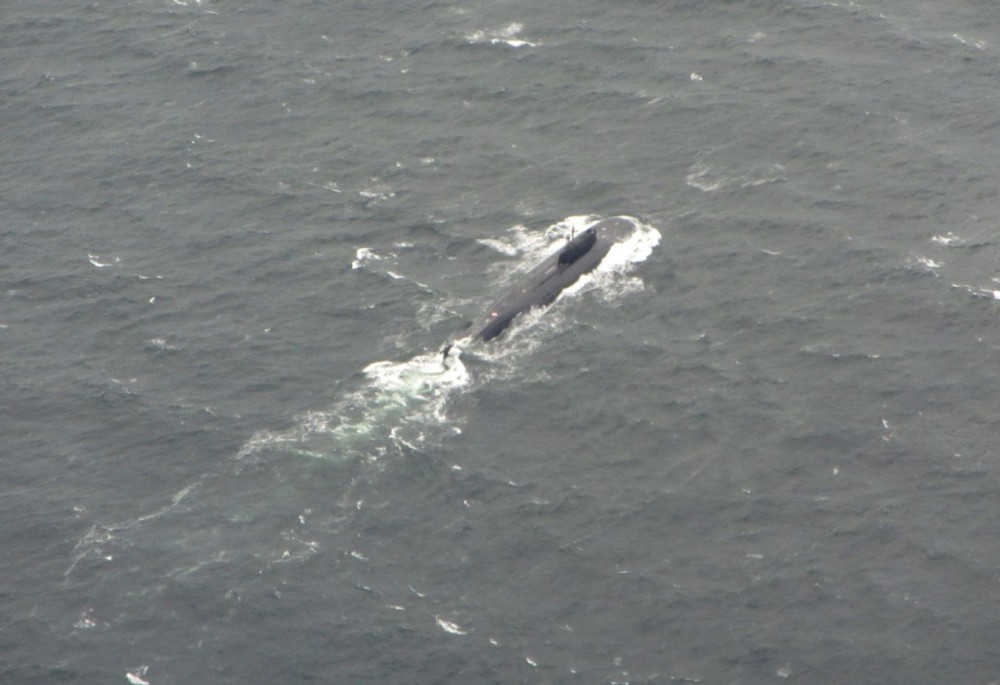 The submarine Orel was spotted by British aircraft operating in the airspace over the Baltic Sea outside Lithuania. Photo: 6 Squadron / Royal Air Force

The nuclear-powered cruise missile carrier Orel is returning home to the Kola Peninsula after participating in the Main Naval Parade in St. Petersburg in late July.
Read in Russian | Читать по-русски
By

The 155 meters long submarine crossed Skagerrak on Saturday after sailing through Danish waters, passing under the Storebelt Bridge.

Orel (K-266) will likely use four or five days en route north to her home base in Zapadnaya Litsa on the Russian Barents Sea coast northwest of Murmansk.

The 28-year old submarine, which is one of three remaining Oscar-II class submarines with the Northern Fleet, is sailing on surface and followed by at least one other Northern Fleet warship.

It is not clear why Orel is on the surface, but submarines in similar transit voyages between St. Petersburg and the Northern Fleet’s bases have also sailed without diving. One reason could be vessels in transit have a smaller crew than when on patrol missions.

This is the second time Orel has participated in the Main Naval Parade in St. Petersburg. The last time was in 2018. Last year, the Northern Fleet’s Oscar-II class submarine Smolensk took part, while in 2017, the giant Typhoon submarine Dmitry Donskoy sailed into Skagerrak and the Baltic Sea.

In late March, the crew on Orel had to quarantine after a civilian, who had met a man infected by COVID-19, embarked on board.

Next week marks the 20-year anniversary for the Kursk disaster. The Oscar-II class submarine Kursk sank in the Barents Sea on August 12, 2000 after a torpedo exploded during an exercise. The explosion triggered the other torpedoes on board to explode and the entire front part of the sub was blown up. The entire crew of 118 died in the accident.

A week after major naval drills, a surprise inspection brings 20 Northern Fleet vessel back to sea