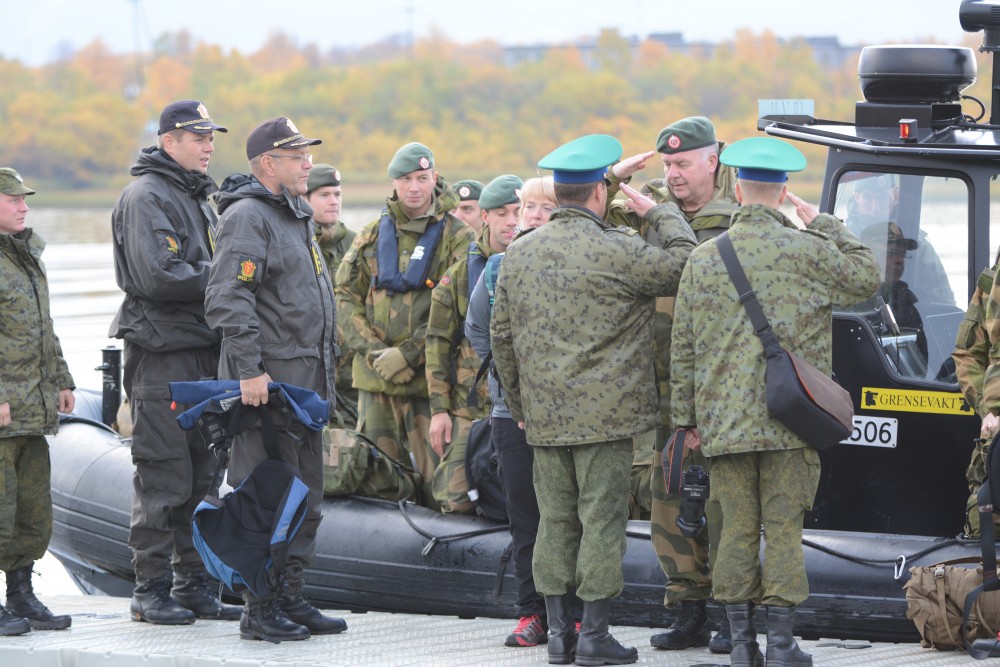 September 2013 was last time a larger delegation of Norwegian military border guards visited the Russian side of the Pasvik River. In 2014, all bilateral military activities with Russia were suspended following Moscow’s annexation of Crimea and active role in the East Ukrainian war. Photo: Thomas Nilsen

Washington’s decision to pull out 700 US Marines from Norway is met with skepticism by a Russian foreign ministry spokesperson, who believes the move in reality could mean a significantly strengthening of American military activity in northern Norway.
Read in Russian | Читать по-русски
By

“Despite the announced reduction in the permanent presence of US Marines in Norway, there is no real decrease in American activity,” Deputy Director of the Information and Press Department of the foreign ministry, Alexey Zaitsev, said.

Zaitsev was interviewed by Kommersant, answering questions about The Barents Observer’s news story on Thursday about the withdrawal of American soldiers from Norway.

“We do not exclude that behind the new dynamic nature of their presence in reality lies a significant increase in the contingent of troops. Under the pretext of joint exercises with the Norwegians, the Americans can, on the contrary, significantly strengthen their position in northern Norway,” Alexey Zaitsev said to Kommersant.

The US Marines has been permanently stationed in Norway on a rotational 6-months basis since 2017, at Værnes airport in southern Norway and at Setermoen in northern Norway. From late fall this year, only about 20 US marines will be left in the country.

Norwegian military officials confirmed continued cooperation and joint training with the US Marines, also in the future.

“For the Army, good joint training will continue and at times with bigger American forces than today,” Major General Lars Lervik said in a comment.

Russia’s foreign ministry spokesperson argues it is such exercises and training which causes concern in Moscow.

Zaitsev said Russia in recent years has observed “systematic military preparations by Norway, especially active in the areas adjacent to the Russian-Norwegian border.”

If taking the most direct path through Finland, the distance from Setermoen, where the US Marines are training and Norway has its main bulk of soldiers, to the Russian border near Kirkenes is 430 kilometers. Driving the shortest road inside Norway, the distance is 961 kilometers.

At the border to Russia, the Garrison of Sør-Varanger (GSV) has military border guards and is currently setting up a 200 soldiers strong ranger unit to be armed with light anti-armor weapons. Norway’s intelligence service (NIS) is also present in the area with high-tech surveillance technology.

Further west in Finnmark, at Porsangermoen, a new Cavalry Battalion is established and the Home Guard is building up presence.

“Such actions by Oslo destabilize the situation in the region,” Alexey Zaitsev said. He added hopes for Norway to continue “building responsibly and far-sighted policy in the North and refrain from actions undermining regional stability and damage bilateral relations.”

US military presence has in the course of the last year become much more frequent in the Arctic, with navy sailings in the Barents Sea and flights with strategic bombers near Russian submarine bases on the Kola Peninsula.

U.S. wants to keep the Arctic an area of low tensions, top official