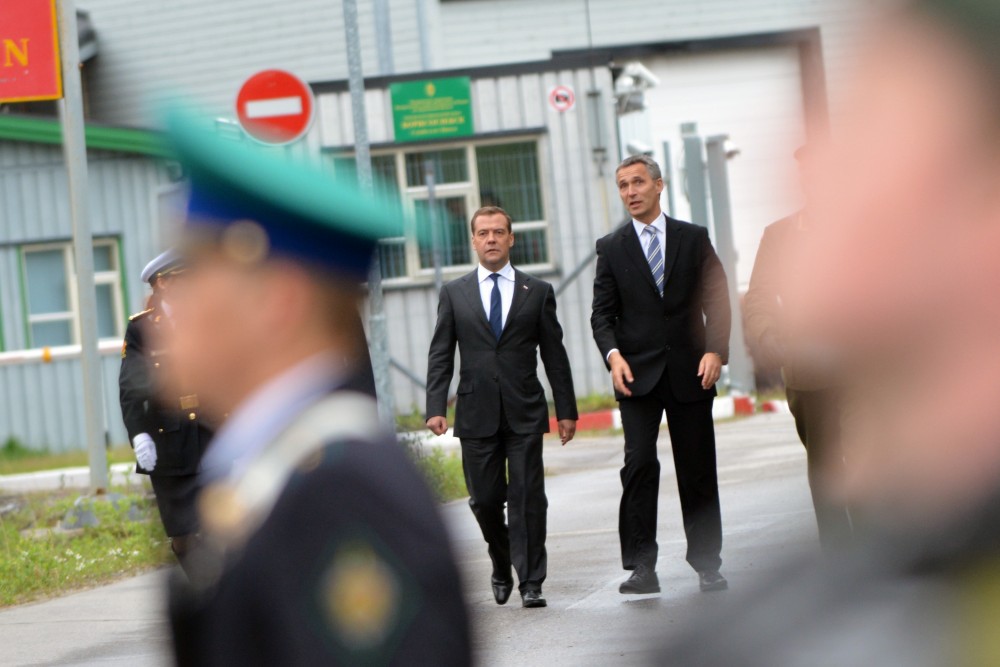 "Certain NATO members, among them the USA, try to restrict Russia's activities in the Arctic," says top security strongman Dmitry Medvedev and makes clear that issues of national security will be part of his country's upcoming chairmanship priorities in the Arctic Council.
Read in Russian | Читать по-русски
By

According to the former president and prime minister, Russia is experiencing a wide range of threats in the Arctic from its NATO neighbors, including military buildup along its northern borders and the introduction of sanctions.

Russia wants peace, stability and mutually beneficial partnership, but that view is not shared by the NATO members, he argues.

“All of this, of course, poses direct threats to our national security,” Medvedev underlined in a Russian Security Council meeting this week. The meeting was the first in Council’s newly established Arctic Commission.

Medvedev highlighted that Russia has growing strategic interests in the Arctic, both in terms of economy and national security.

“This region is of special strategic importance for us. Here, the state is handling its most important tasks — the protection of economic interests and national security,” he said.

He also outlined how his country now is expanding its presence in the region with new major energy projects and infrastructure.

Medvedev, who in late 2019 was appointed Deputy Head of the Russian Security Council leaves no doubt that Russia will take appropriate actions to handle threats.

“Despite attempts from certain countries to destabilize the situation in the Arctic, we will successively protects our positions in the region.”

The new realities must now also be reflected in the work of intergovernmental organizations, Medvedev argues. And one of the most significant of those platforms is the Arctic Council, the powerful state official underlines.

According to Medvedev, Russia must now do its utmost to prepare for the upcoming chairmanship period.

“Russia must in the most serious manner address its work in the organization,” he underlined and added that the federal government in the near future will be requested to establish an organizational committee that is to prepare the chairmanship.

That comes in addition to ongoing preparations conducted by the Russian Foreign Ministry together with the Ministry of the Far East and Arctic. The two ministries are elaborating a road-map for the work that is to be completed no later than early February, Medvedev explained.

Russia will take over the rotating chair of the Arctic Council in 2021 and lead the club until 2023. The official takeover of the chair will take place in a ceremony in Reykjavik, presumably in May 2021.

Currently, the intergovernmental Arctic cooperation first of all includes joint action on environmental protection and research. The council’s founding document, the Ottawa Declaration from 1996, states that “the Arctic Council should not deal with matters related to military security.”

However, that framework was shaken in May 2019 when U.S State Secretary Mike Pompeo in a speech delivered ahead of an Arctic Council ministerial lashed out against Russia and China. According to Pompeo, Russia is acting with increasing aggression in the North and militarizes major parts of the region. He also attacked Russia’s development of the Northern Sea Route.

It is increasingly clear that Dmitry Medvedev and the the Russian Security Council will play a key role in Russia’s chairmanship period in the Arctic Council. The security body has for years actively engaged in Arctic issues, and has under the auspices of its Secretary Nikolay Patrushev organized a number of Arctic meetings with high-ranking international guests

With the establishment of its Arctic Commission, the Council is likely to further bolster its Arctic activities.

The Russian Security Council is headed by President Vladimir Putin. Among its 12 permanent members are key representatives of the Russian top power and law enforcement authorities. The Council holds weekly meetings.