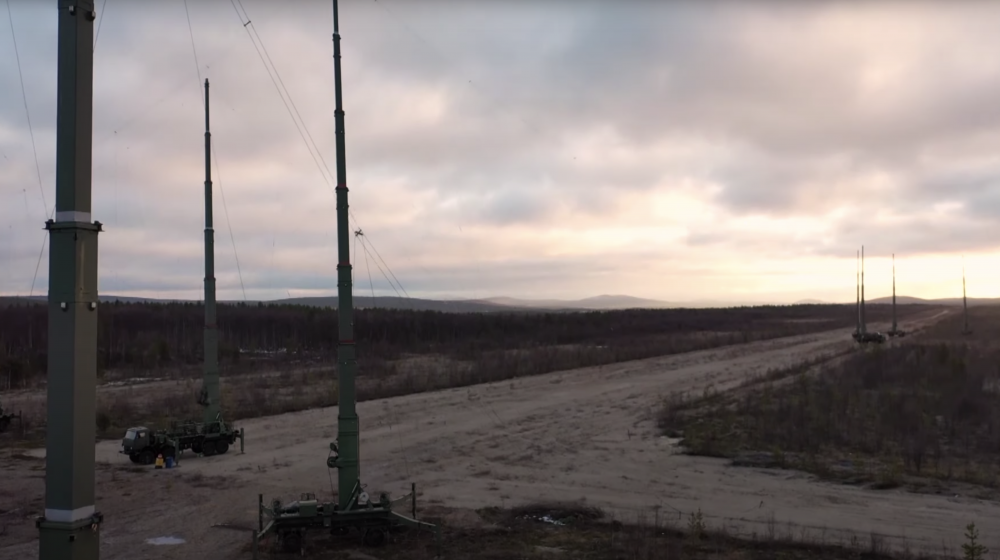 Eight antenna masts and control vehicles were put in place, ready for action, at the abandoned airfield near the village of Pushnoy south of Murmansk. Screenshot from video by Russian Defence Ministry

The Northern Fleet's Center of Radio-Electronic Warfare has rolled out and tested its Murmansk-BN complex which are designed to suppress enemy radio signals at distances of up to 5,000 kilometers.
Read in Russian | Читать по-русски
By

Deployment of the Murmansk-BN complex was organized as a tactical exercise, the press service of the Northern Fleet informs. From its base near Severomorsk, the vehicles with a full set of telescopic antenna masts and control units drove about 100 kilometers, including via terrain roads, to a closed-down airfield where the runway was used to park the trucks and raise the antennas.

The Northern Fleet does not name the location.

However, it is possible to locate the exercise area. The Barents Observer has compared the video published on the YouTube channel of the Ministry of Defence with YouTube videos published by the paraglider community in the Murmansk region. Google Earth satellite images are also very helpful in determining the mountains in the horizon of the exercise video. 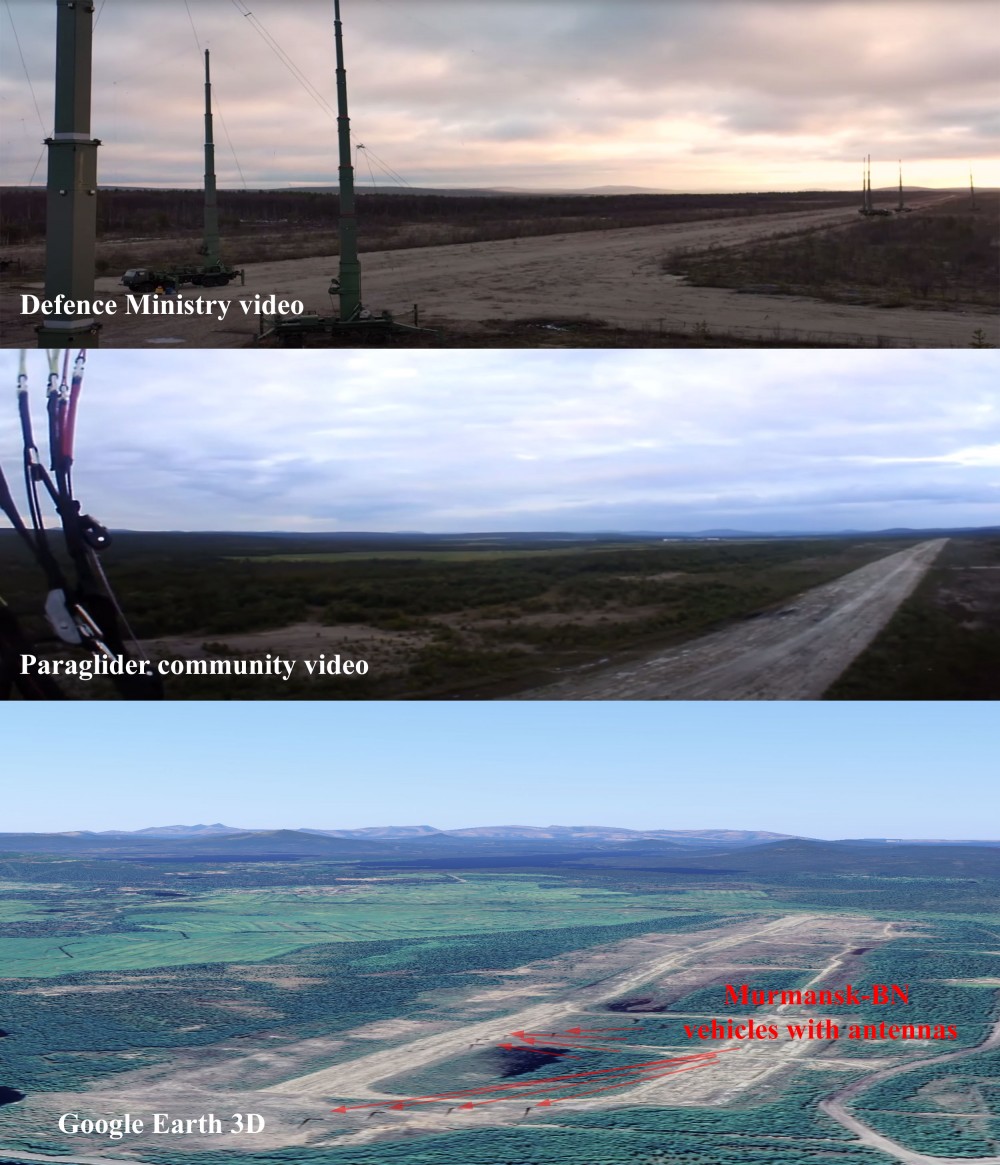 The runway is Kitsa Airfield (эродрома Кица), an abandoned military airbase near the village of Pushnoy, a few hundred meters from the main road E105 between Murmansk and Olenegorsk.

But most interesting, the Google Earth images clearly show that this is not the first time the Northern Fleet’s Radio-Electronic Warfare unit has used this particular airfield. Antennas, and the shadows of the antennas, are clearly visible in the satellite image. Four antenna-vehicles by the end of the runway, and anther four some 350 meters down the landing strip. Just like the Defence Ministry video shows.

While the satellite image shows green leaves on the trees in the surroundings, the Defence Ministry video is late autumn.

According to the press service of the Northern Fleet, the Murmansk-BN complex were deployed and defence protection was provided around. It is not said anything about if the system actually was activated.

The powerful Murmansk-BN system is deployed at several locations in Russia, but two of them are dedicated to cover the Arctic region; this one on Kola, while the other is on the Kamchatka Peninsula in the Far East.

The system is modern, first operational on Crimea in 2014. The complex deployed by the Northern Fleet’s Center of Radio-Electronic Warfare in Severomorsk was tested in the period from 2016 to 2019. In the spring of 2019, the system was announced operative together with the Krasukha-2 and Krashukha-4, aimed at countering airborne radar systems like enemy missiles, The Barents Observer reported. Together with the complex on Kamchatkha, the system could then make a shield covering the entire Russian Arctic.

While the Krashukha systems can jam satellite communications, GPS signals and drone communication, the Murmansk-BN is a short-wave system for radio reconnaissance, intercept and suppress enemy signals over the entire short-wave range at distances up to 5,000 kilometers.

That means its deployment on the Kola Peninsula in practice covers all of Scandinavia in whatever weather conditions. The distance from the abandoned Kitsa airfield to the Norwegian border at Jarfjord mountain near Kirkenes is 160 km, while the distance to Finland’s border checkpoint Raja-Jooseppi in Lapland is 195 km.

Spokesperson Ragna Marie Henden with the Norwegian Communications Authority (Nkom) says in an email that “no jamming or interference with any Global Navigation Satellite System (GNSS) are registered over the last few days.”

Since 2018, the northeastern parts of Norway and Finnish Lapland have been regularly troubled by GPS jamming, of which Norwegian officials say were deliberately activated by Russian military electronic warfare units based on the Kola Peninsula. Such long-ranged jamming happened during NATO’s 2018 Trident Juncture exercise in Norway, but has also later jeopardized safety for civilian actors in the Kirkenes area, like search and rescue units, ambulance planes and civilian aviation at the airports in Norway’s border region to Russia.