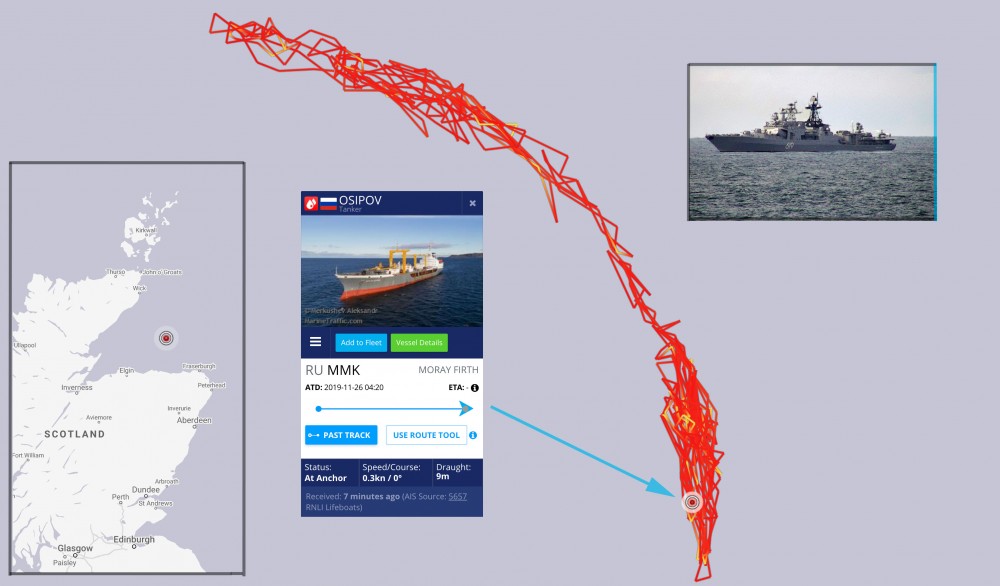 The red lines show the paths of Northern Fleet tanker "Sergey Osipov" sailing with the AIS tracker on, while "Sevomorsk" has turned off the tracker and is therefor not visible for civilian sites. Map: MarineTraffic.com / Barents Observer

The Russian destroyer "Severomorsk" will exercise submarine hunt and defence against air attacks outside Norway later this week.
Read in Russian | Читать по-русски
By

In September, the British Royal Navy led the largest NATO task force into the Barents Sea since the last Cold War. The warships sailed to north of the Kola Peninsula, home to the Russian Northern Fleet’s ballistic missile submarines and surface warships.

In what seems like a equivalent retaliation, or tit-for-tat, the powerful guided missile destroyer “Severomorsk” has since last week been sailing back and forth close to British shores just north of the Royal Air Force base Lossiemouth in north-east Scotland.

Planes from this airport is well known for the Russian military as it is home to the Quick Reaction Alert (QRA) Typhoon fighters that use to meet Russian maritime reconnaissance and anti-submarine Tu-142 planes and long-ranged strategic bombers, like the Tu-95 and Tu-160, as they are flying outside British airspace.

Lossiemouth also has a squadron of Poseidon P-8A multi-role maritime patrol aircraft equipped with sensors and weapons systems for hunting Russian submarines in the North Atlantic.

It is possible to follow the Russian naval tanker “Sergey Osipov” via online maritime tracking services, like the MarineTraffic.com, as the civilian painted vessel sails with the Automatic Identification System (AIS) turned on.

The press service of the Northern Fleet on Monday confirmed that also “Severomorsk” was sailing together with the navy tanker.

“… in the Gulf of Moray Firth, the crew of “Severomorsk” conducted an anti-sabotage defence exercise and practiced refueling of bunkers and fresh water from the tanker,” the announcement reads.

Participating in the September NATO naval mission to the Barents Sea was a Norwegian frigate.

The Northern Fleet informs that “Severomorsk” now will sail north and exercise hunting for enemy submarines, as well as combat training to defend against sea and air attack weapons. The exercise will take place in both the Norwegian- and Barents seas.

After exercising, both “Sergey Osipov” and “Severomorsk” will sail back to their home-base in Severomorsk north of Murmansk.

When navy ships are to conduct live-shootings, such NOTAM is issued as a warning to civilian air traffic in the area.

“Since the activity takes place in international waters and air space, there are no requirements to inform Norway,” Hammarbeck says to The Barents Observer.