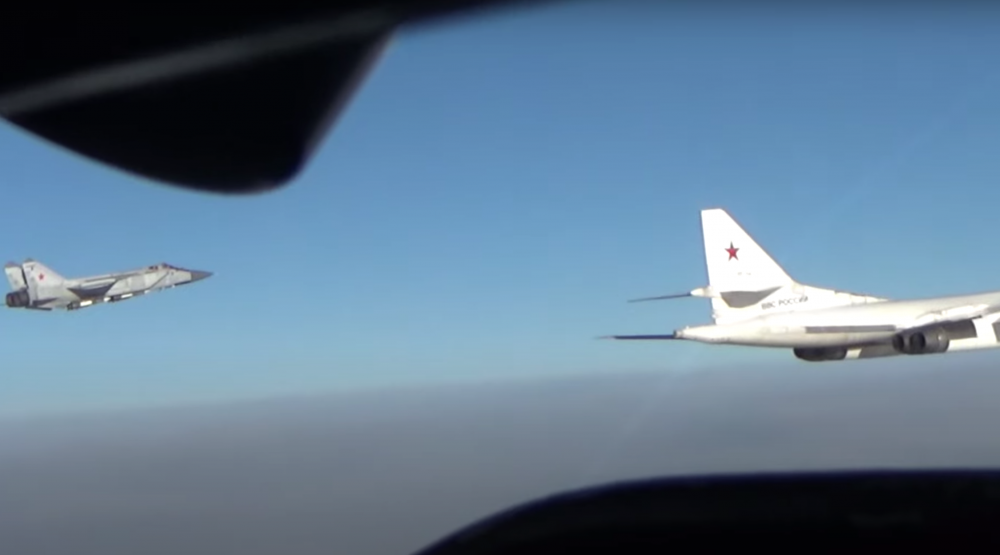 The pair of Tu-160 strategic bombers were escorted by MiG-31 over the Barents Sea. Screenshot from Defense Ministry video

MiG-31BM on five hours North Pole mission, Tu-142 maritime reconnaissance flight along the coast of Norway south to the North Sea, and Tu-160 strategic bombers flying over the Barents-, and Norwegian Seas. All on the same day as the Northern Fleet launched an Arctic strategic command and staff training exercise in Severomorsk.
Read in Russian | Читать по-русски
By

Monday was a busy day for Russian military pilots and ground staff up north.

The command center of the Northern Fleet in Severomorsk, which from January 1 this year equals a military district in Russia, triggered a command and staff training that will last for the next couple of days.

The drill is aimed to tests the headquarters’ work on coordinating all levels of preparation and implementation to conduct operations to protect the interests and ensure the security of Russia in the Arctic, the Northern Fleet informs.

Although the Northern Fleet does not confirm a direct link between the command exercise and other Russian military operations in the Arctic on Monday, the timing of the events was unlikely coincidental.

Over the last few months, the two airfields at Franz Josef Land and Novaya Zemlya have become fully operational with MiG-31 interceptors.

On Monday, one such MiG-31BM took off from the year-round operational airfield Nagurskoye on Aleksandra Island at Franz Josef Land. Located at 80 degrees north, the 3,500 meters long runway is the world’s northernmost.

The MiG-31BM first flew to the North Pole before turning south. The plane had two midair refueling and was airborne for five hours before landing at an airfield on the Kola Peninsula, according to the press service of the Northern Fleet.

A pair of Tu-160 strategic bombers flying out over the Kola Peninsula to the Barents Sea were escorted by MiG-31 from the Northern Fleet’s naval aviation, a video posted on the Defense Ministry’s YouTube channel shows.

The bombers flew in international airspace over the Barents- and Norwegian Seas before turning north again.

The comprehensive military air operations on Monday also included a pair of Tu-142 maritime reconnaissance aircraft from the Kipelovo airfield in Vologda Region. Like the strategic bombers, the long-range flight took place over the Barents Sea, Norwegian Sea and the North Sea.

Flying out from the Kola Peninsula, the Tu-142s were escorted by Su-33 fighter jets, according to the statement from the fleet. The duration of the flight was about 11 hours.