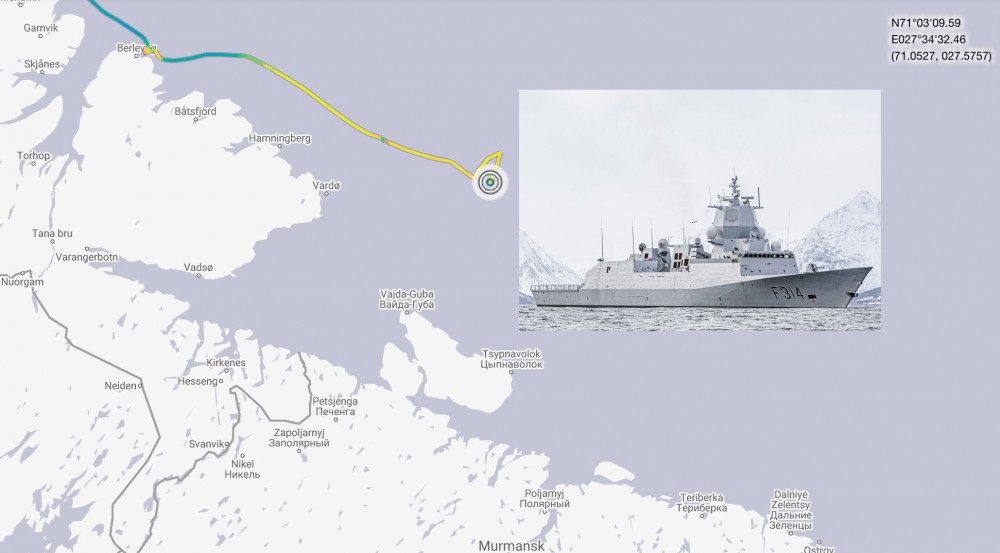 "KNM Thor Heyerdahl" will maintain presence and preparedness in the north in the times ahead.
Read in Russian | Читать по-русски
By

“This is a planned sovereignty patrol,” says spokesperson for Norway’s Joint Head Quarters, Jørn Hammarbeck, to the Barents Observer.

Last week, “KNM Thor Heyerdahl” conducted joint warfare training with the British frigate “HMS Lancaster” in the waters off Troms region on the northern coast to the Norwegian Sea.

Shortly after, the Norwegian frigate sailed into the Barents Sea, made a turn north of Russia’s Fishermen Peninsula, and continued northwest along the coast of Finnmark according to the vessel’s AIS tracking data.

“Up north, Norway and Russia have a good and professional respect in regards to maritime borders and international rules,” Hammarbeck underlines.

Last September, “KNM Thor Heyerdahl” made headlines in the news when sailing north of Russia’s Kola Peninsula together with British and U.S. Navy warships. That voyage was the first time a Norwegian frigate sailed international waters east of the Varanger fjord on a mission not in cooperation with the Russian Northern Fleet.

Prior to Moscow’s annexation of Crimea in 2014, Norwegian frigates made a few friendship port calls to Severomorsk, the main naval base of the Northern Fleet.

Also Monday morning, the Northern Fleet’s hydrographic research vessel “Romuald Muklevich” was sailing very close to Norway’s maritime border in the Varanger fjord, halfway between the Fishermen Peninsula and the town of Vardø.

The ship is on a joint mission with the Russian Geographical Society in search for two Soviet submarines that went missing during the Second World War, a statement from the Press Service of the Northern Fleet said on Monday.

The M-122, though, is believed to be sunken north of the Fishermen Peninsula, according to the portal Uboat.net which keeps track of allied vessels sunken during Second World War. M-175 is believed to be even further north in the Barents Sea.

As previously reported by the Barents Observer, the “Romuald Muklevich” is the Northern Fleet’s best-equipped research and survey vessel. Last April, the ship reentered the fleet with a new multi-beam acoustic sounder with extended features, making it well suited for searching for sunken objects and mapping the seabed.