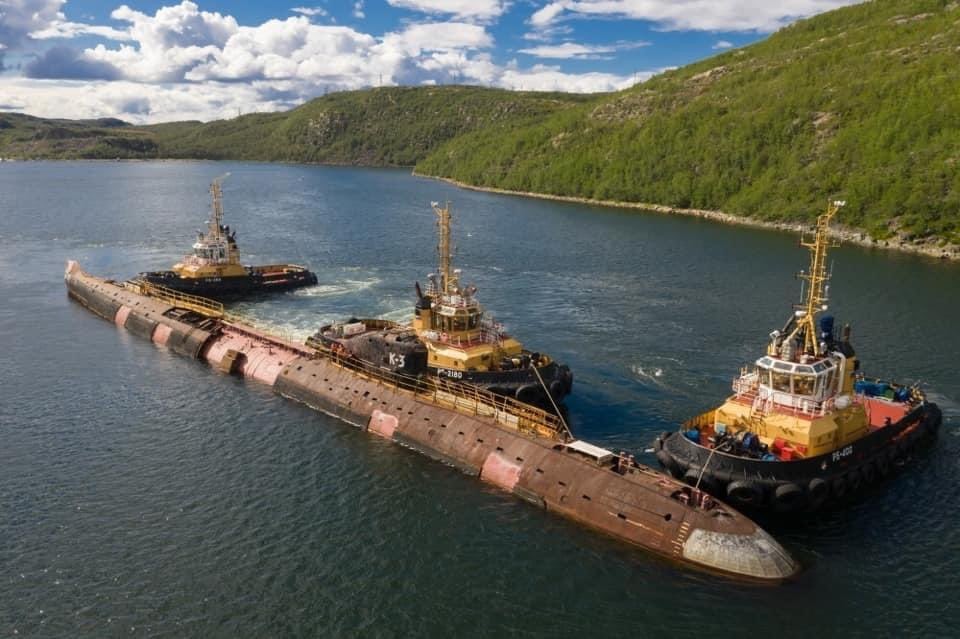 The K-3 was in late July released from the pier at Nerpa shipyard on the Kola Peninsula and will soon be taken into a floating dock for transportation. Photo: Aleksandr Merkushev

The legendary submarine K-3 "Leninsky Komsomol" will be transported from the Nerpa shipyard on the Kola Peninsula to Kronstadt outside St. Petersburg to become part of the Museum of Navy Glory.
Read in Russian | Читать по-русски
By

It is the blog site of the Zvezdockha shipyard that informs about the ongoing preparation for the special voyage. Nerpa shipyard, where K-3 has been since 2005, is a branch of Zvezdockha.

The historic submarine will in the nearest future be placed onboard the «Sviyaga» floating dock, operated by the Defense Ministry’s Main Directorate for Deep-Sea Research (GUGI) which will sail from the Barents Sea coast via the White Sea and the inner waterways to Kronstad outside St. Petersburg. The floating dock, commissioned at the Zeleodolsk shipyard by the Volga river in 2015, is specially designed for sailing Russia’s inner waterways, including the White Sea Chanel built by Stalin prisoners in Karelia.

At the Museum of Navy Glory in Kronstadt, K-3 will be re-equipped, the inner rooms will be restored and a glass doom will be built over before the submarine will be opened to visitors.

First put on the water more than 60 years ago, the K-3 “Leninsky Komsomol” was the Soviet Union’s first nuclear-powered submarine.

Based in Zapadanya Litsa and sailing for the Northern Fleet, the sub became the first Soviet vessel to reach the North Pole underwater. That happened in June 1962, four years after the U.S. navy sub “Nautilus“  accomplished the first-ever under-ice voyage to the North Pole.

Powered by two water-cooled reactors, the K-3 became a famous symbol for the Soviet underwater warfare capabilities, but the submarine also wrote itself into history for several malfunctions and a terrible lethal fire. 39 of the crew died in the fire that started on September 8, 1967, while transiting the Norwegian Sea.

Despite severe damage to the interior caused by the fire, the sub was repaired and put back into service again.

While K-3 was the prototype submarine for Project 627 (NATO: November-class), a total of 12 similar subs (Project 627A) were built, including the K-159 that sank north of Murmansk in 2003 and still rests on the seafloor.

It was in October last year a decision was made to send the submarine to Kronstadt to become part of the naval museum. Previously, a plan existed on mooring the K-3 at the pier next to “Lenin” icebreaker in the central harbor of Murmansk.

The only remains of K-3 now being left up north are the heavily contaminated reactor compartment and solid radioactive waste stored at the Saida Bay facility on the coast to the Barents Sea.