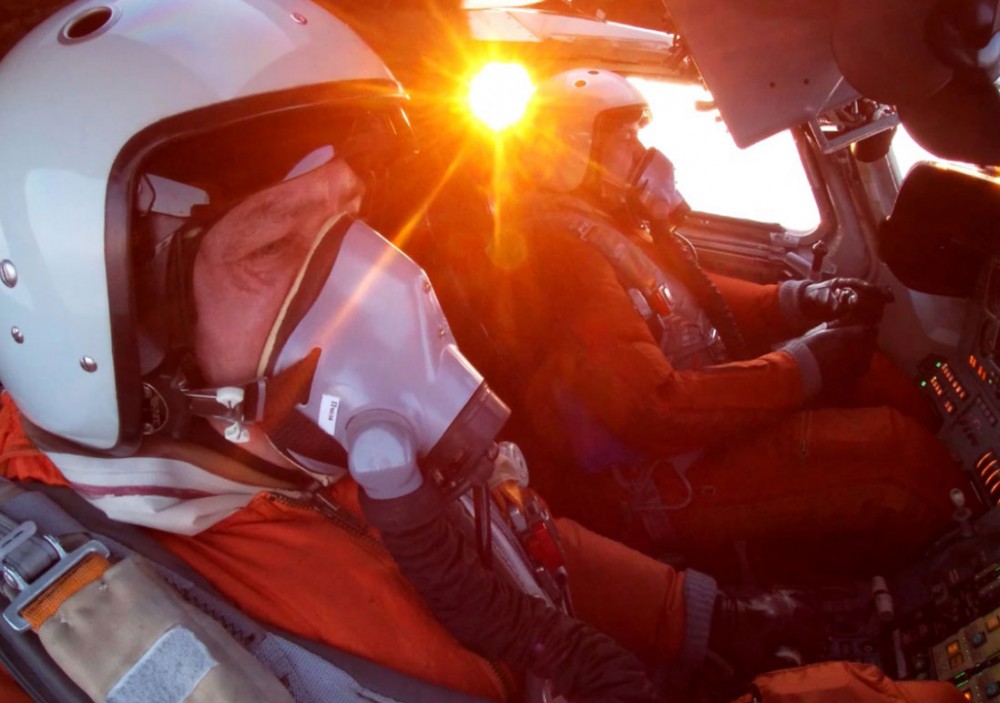 Pilots in cockpit on a Tu-160 aircraft. Photo: Russian Ministry of Defense

Busy day in the skies over the Barents- and Norwegian Seas as NATO scrambled F-16s and F-35s to meet a pair of Russian Tu-160 strategic bombers and other military aircraft, while a U.S. RC-135 reconnaissance aircraft for several hours flew back-and-forth outside the important submarine bases at the Kola Peninsula.
Read in Russian | Читать по-русски
By

The military flights less than a day after Russian Foreign Minister Sergey Lavrov visited Norway is a reminder that the high north is no exception from current international tensions and military buildup.

Two Tu-160 cruise missile carriers conducted an eight hours flight over the Barents- and Norwegian Seas on Wednesday, Russian Defense Ministry reports. The strategic bombers were escorted by Northern Fleet MiG-31 fighter jets from the Kola Peninsula for part of the flight, a video posted by the Ministry’s TV Zvezda shows.

A Norwegian F-16 fighter jet is seen in another sequence of the film, as it flies a few hundred meters from one of the large Russian bombers.

“A good practice for the two F-35s, temporarily stationed at Evenes, that are preparing to take over the Quick Reaction Alert in January next year,” the Norwegian Air Force said in a comment to the busy military aviation day.

The fleet of F-16s at Bodø will end the QRA mission when the F-35s are fully operational.

Additional to the pair of Tu-160, a Russian Beriev A-50 was observed by the Norwegian fighter jets. The plane is an airborne early warning and control aircraft, easy to recognize by its large surveillance radar and its antenna.

Lavrov in Tromsø and Oslo

Meeting his Norwegian counterpart Anniken Huitfeldt at the Barents Council in Tromsø, Sergey Lavrov on Monday and Tuesday underlined the two countries’ mutual respect being substantiated by cross-border links by people living next door to each other. The Russian Foreign Minister, however, came with straightforward words:

“Norway is member of NATO and NATO is not a friend of Russia,” he underlined and added that Nato now is “looking for the meaning of its future existence” and that it wants to be “responsible for security all over the world.”

It is two years since the last visit to Norway by the Russian Foreign Minister. Then, marking the 75th anniversary of the Red Army’s liberation of Kirkenes, the Russian Northern Fleet’s multi-purpose submarines started weapons testing in the Norwegian Sea. The news was announced the day after Lavrov flew home to Moscow.

Also on Wednesday, a U.S. air force RC-135 reconnaissance aircraft was flying back and forth outside Russian air space near the Kola Peninsula during the four-five hours period with good daylight.

Onboard is equipment to intercept, record and analyze radio communication, dissect dislocations, composition, operating modes and characteristics of radio-electronic command and control facilities of enemy aviation.

The Barents Observer followed the American plane via the FlightRadar24, a free application tracking live all civilian and military aircraft flying with transponders on.

Russian strategic bombers and fighter jets do normally not turn on the transponders when flying domestic or international airspace. Neither do the Norwegian F-16s.

The RC-135 V aircraft numbered 64-14842 came from Mildenhall Air Force Base in the United Kingdom. Allied spy planes on reconnaissance flights outside Russia’s strategically important nuclear submarine bases on the Kola Peninsula are not allowed to use airports in Norway or fly over Norwegian territory. For Norway, this policy is based on the delicate balance between deterrence and reassurance, being a NATO member, but at the same time not provoking Moscow.

Before flying east over the Barents Sea, the American plane made an in-air refueling from a KC-135 Stratotanker northwest of Hammerfest, Europe’s northernmost mainland.