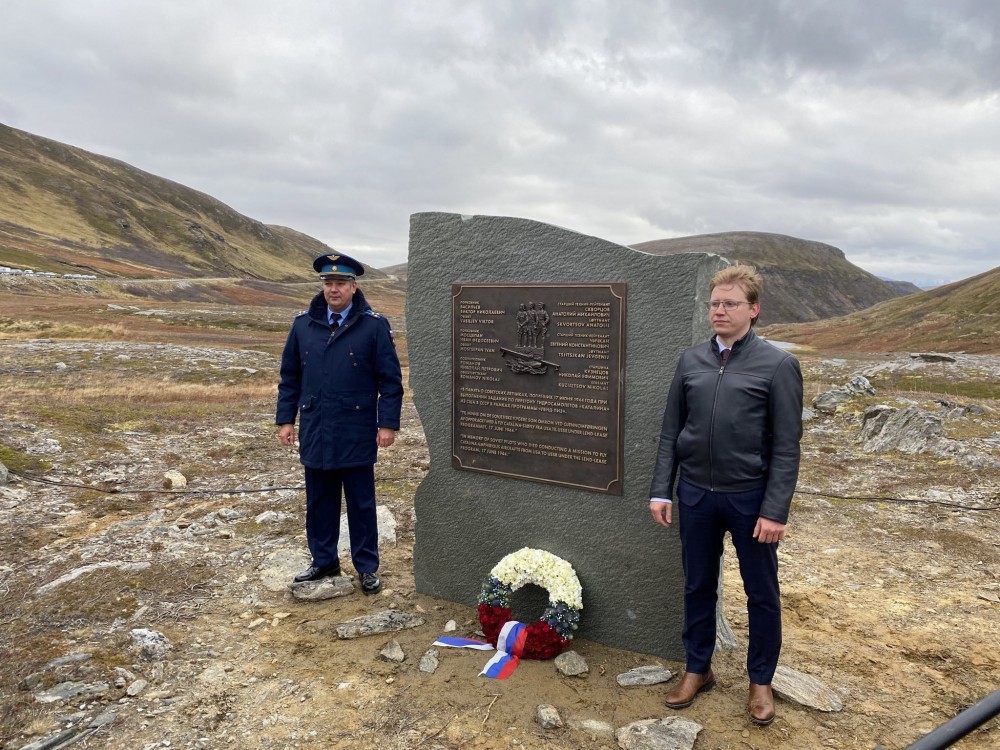 Russian Consul General Nikolai Konygin (right) participated as the memorial at the crash site of the plane on a mountain peak in Hasvik, Finnmark was unveiled in Thursday. Photo: Barents Observer

Officials from Norway, Russia, and the United States participated as the long-debated, Moscow-initiated, Second World War memorial was unveiled on October 7, Vladimir Putin's birthday.
Read in Russian | Читать по-русски
By

The monument is erected on the 350-meter high mountain Andotten in Hasvik, a small Norwegian municipality west of Hammerfest in northernmost Norway.

In June 1944, a Catalina amphibious aircraft crashed into the steep mountain by accident in bad weather, killing the crew of six Soviet airmen. Wearing American uniforms, the crew was flying from the United States towards Murmansk via Iceland.

It was in 2017 that Russian government officials contacted Norwegian authorities about their plans to erect a memorial in Hasvik. The local municipality, however, refused to allow the Russians to build the monument before it had been approved by central authorities in Oslo. The approval came in January this year.

The engagement of the Russian Defense Ministry in the case has triggered unease among Norwegians. Many see the monument as a carefully planned move by Moscow aimed at testing the Nordic nation and sowing discord between Oslo and the traditionally more Russia-friendly northern regions.

Some also argue that Russia has a military security interest in the war memorial in Hasvik. The process with the Russian monument has strongly engaged the local town mayor Eva Husby. In 2020, she even published a book about the case. It is titled “The Memorial.”

Husby has previously told the Barents Observer that this case is far out of the ordinary.

“I see it as a peace-keeping project,” she said.

The memorial consists of a stone cut out from the mountain and a metal plate with an inscription, including the names of the six crew members. The metal plate is made in Moscow.

The monument in Hasvik is not the first Russian memorial erected in northern Norway over the past years. Several places in the region have seen new monuments built, some of them to the memory of partisan forces.

In July 2018, a joint Russian-Norwegian project group with members of both countries’ parliaments was instrumental in the erection of a monument outside Vardø in the Finnmark region. That memorial is made in the form of a Soviet-stile bauta and has its text written first in Russian and then in Norwegian.

A Gulag historian returns to prison