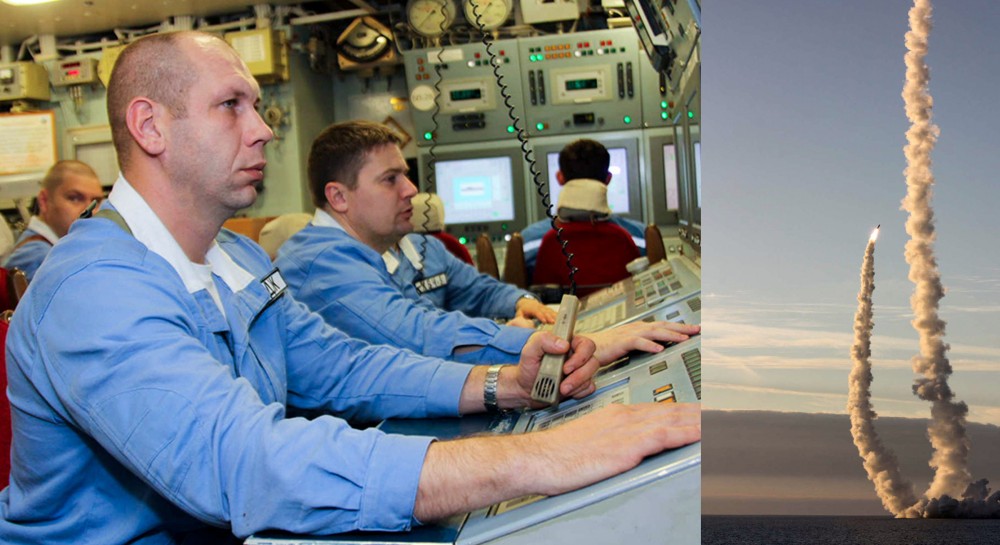 Central command post on the SSBN "Yury Dolgoruky" during a double-launch of Bulava-missiles from the White Sea in September 2016. Photo: Russian Ministry of Defense

Russia will exercise its triad of nuclear forces with submarines, ballistic- and cruise missiles, the Defense Ministry said.
Read in Russian | Читать по-русски

It was in January Russia’s Defense Ministry announced it would arrange the full-scale GORM [Thunder] 2022 exercise of the strategic nuclear forces sometime in early 2022. Now, the ministry takes a rare move and specifies the exact date of the drill, Saturday, February 19, RIA Novosti reports.

“On February 19, under the leadership of Supreme Commander-in-Chief of the Russian Federations Armed Forces, Vladimir Vladimirovich Putin, a planned exercise of strategic deterrence forces will be held, during which ballistic and cruise missiles will be launched,” the announcement stated.

The nuclear weapons exercise takes place amid tensions over Ukraine, but as such, drilling the triad of nuclear forces has happened several times in recent years. Like at Grom-2019 when cruise missiles launched from the Barents Sea for the first time played a key role in the exercise.

As reported by the Barents Observer earlier this week, Russia has closed off a giant area in the Barents Sea, including large parts of the Norwegian sector, for military activity. The danger alert for the area from the Varanger fjord in the east to almost the Bear Island in the northwest is marked with “Impact Area for Russian Missiles.”

When exercising the nuclear triad, SSBN submarines with both the Northern Fleet and the Pacific Fleet use to launch ballistic missiles. From the Pacific towards target areas near Kap Kanin in the eastern Barents Sea, while one or two Northern Fleet SSBNs will launch missiles in the other direction, from the Barents Sea to targets at the Chukotka Peninsula.

Like the Northern Fleet has closed off waters north of Norway and the Kola Peninsula, Russia’s Pacific Fleet has altered danger areas in waters off the Kamchatka Peninsula.

In addition, a missile will likely be launched from the Plesetsk cosmodrome in the Arkhangelsk Oblast towards a target in the Far East.

During Grom-2019, Kalibr cruise missiles were launched from both the «Severodvinsk» multi-purpose submarine and the new frigate «Admiral Gorskhov» both sailing the Barents Sea at the time of exercise, the Barents Observer reported.

The naval version of the Kalibr missile has a range of about 1,500 kilometers, and can with that hit targets all over northern Scandinavia, including military airports like Bodø, Luleå and Rovaniemi, or enemy naval groups in the northern part of the Norwegian Sea.

Since 2019, Russia has also tested the Tsirkon hypersonic cruise missile from both surface warships and the “Severodvinsk” submarine from the Barents- and White Seas.

Both the Kalibr and the Tsirkon can carry both conventional and nuclear warheads.

There are currently about 20 Northern Fleet warships and support vessels sailing the Barents Sea as part of an ongoing exercise.

On Friday, the Defense Ministry reported that three aviation regiments of the Northern Fleet took part in the exercise to defend the Kola Peninsula, home to the ballistic missile submarines. This exercise included about 20 sorties from airports in the Murmansk region and was carried out in cooperation with the naval forces operating in the Barents Sea.

Su-24 bombers, as well as Su-33 and MiG-29 fighter jets trained on attacking enemy targets at sea in cooperation with the nuclear-powered battle cruiser “Pyotr Velikye” and the frigate “Admiral Gorshkov”.

Onshore, units of the air defense with S-300 and S-400 systems participated in the drill.