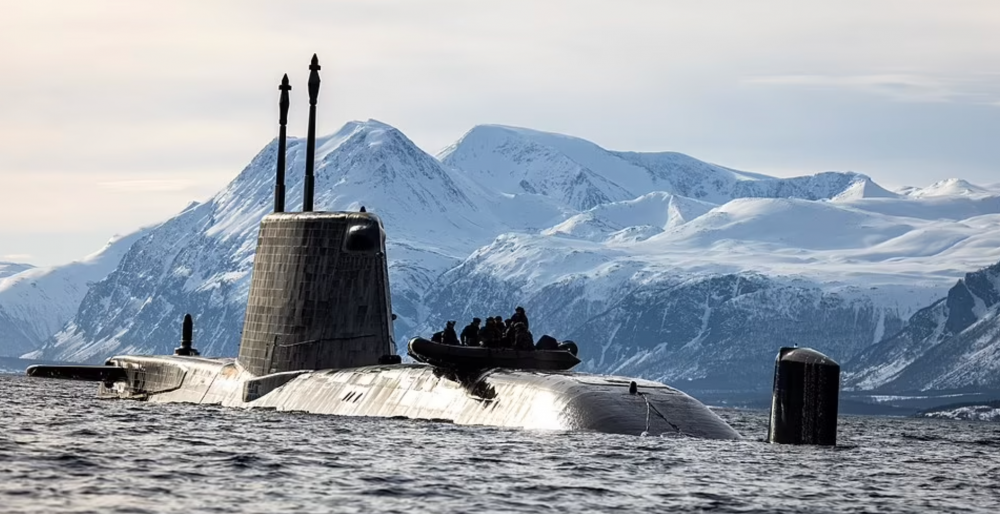 Against the backdrop of snow-covered mountains of the Lyngen Alps in northern Norway, a team of commandos soldiers surfacing from a submarine trained landing and raid on the icy shores, as Defense Secretary Ben Wallace presented the UK’s new military Arctic strategy on Tuesday.
Read in Russian | Читать по-русски
By

Choosing Norway when presenting the military Arctic strategy was no coincidence. The two countries are close allies and northern Norway will play a crucial role in the United Kingdom’s warfare training and operations in the years to come.

“The High North and impact of climate change affects us all whether we like it or not,” the British Defense Secretary said as he presented the new Arctic military strategy (pdf).

“The North Atlantic will always be in the UK’s home beat and so it is vital that we strengthen both our interoperability and our force integration with NATO and non-NATO partners in the region,” Wallace, said.

There is 2,000 British personnel participating in the Norwegian-led exercise taking place deep inside the Arctic Circle. Including the submarine, the Royal Navy has six warships participating in what is NATO’s largest Arctic exercise since the last Cold War.

The exercise was planned long before Russia’s invasion of Ukraine, but the tense security situation between Russia and the West has for years framed the security thinking in Arctic Europe. New, more silent operating Russian submarines of the Yasen-class are harder for NATO to detect when sailing into the Norwegian Sea. Also, the Northern Fleet has exercised deeper into the Greenland-Iceland-UK (GIUK) gap in recent years. These are waters important for Russia’s bastion defense concept when protecting the ballistic missile submarines in the Barents Sea, but also waters important for reinforcement of Norway in case of military troubles in the north.

After the meeting in Troms, the Norwegian minister Enoksen and Secretary of Defense Wallace were supposed to continue to Kirkenes, the Norwegian border town to Russia’s heavily militarized Kola Peninsula. However, due to bad weather on Wednesday, the meeting with the border guard soldiers was canceled.

As part of the UK’s new Arctic military strategy, more British soldiers will train in northern Norway. The UK will also invest in research and development to build sustainable and modernized defense capability for the region, the strategy document reads.

Around 900 Royal Marines have been deployed to the Arctic since January in preparation for the exercise. According to the new strategy, the UK will maintain a periodic Royal Navy presence inside the Arctic Circle. For now, that means at the Norwegian military bases in Troms region, about 450 kilometers west of the border with Russia.

From time to time, nuclear-powered submarines from the United States, France and Britain make port calls to Norway, but active exercises deep inside a Norwegian fjord is a rare sight.

The 81-kilometre Lyngen fjord is the longest in Troms. Along the western shores are the Lyngen Alps, the highest mountains in northernmost Norway.

Astute-class is the country’s latest generation hunter-killer submarine. Powered by one nuclear reactor, the 7,400 tons and 97-meter long vessel can operate at 30 knots submerged and dive deep to 300 meters.

The submarine is armed with torpedo tubes for up to 38 weapons, plus a number of Tomahawk cruise missiles.

“Cold Response 22 offers an amazing opportunity to learn how to work together in a really harsh environment. When you are in the high north and when you are in the maritime or ashore, its real, you’ve got to cope with the environment first before you can then think about the adversary, and so there is no more realistic environment or harsh environment then up here, which is a huge opportunity for all of us,” said Brigadier Rich Cantrill, in charge of the UK’s commando forces.

Commodore Jim Perks, the head of the Royal Navy Submarine Service, said: “The ability to operate undetected for significant periods of time with top quality kit ensures that a submarine remains a formidable delivery mechanism, in this case enabling the covert deployment of the Surveillance and Reconnaissance team as showcased in the exercises off Norway.”

“Our ability to work together highlights the remarkable attributes of the team and the platforms in which we operate,” he added.

The Arctic military strategy also outlines how the UK will protect critical underwater national infrastructure and ensure freedom of navigation through international seas and Exclusive Economic Zones in the Arctic region.

In March 2020, a British frigate together with four U.S. surface warships sailed into the Barents Sea for the first time since the breakup of the Soviet Union. In September of the same year, another group of US. and British surface navy ships sailed outside the Kola Peninsula, this time including a Norwegian frigate.