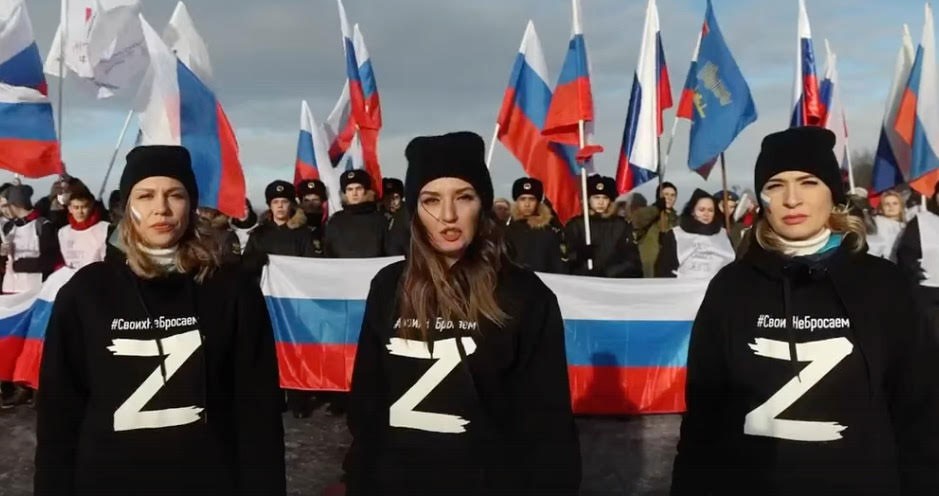 "The Russian Army is fighting for the security of Russia and the whole world against Nazism," a video produced by the Murmansk Government Youth Committee says, and in the Northern Fleet headquarter city of Severomorsk children line up in formation of the "Z."
Read in Russian | Читать по-русски
By

“We, citizens of the Murmansk region, like few others, understand that the fight against Nazism, against natural disasters or pandemics can be won only when we stand united, shoulder by shoulder,” three young women say in the video posted on the VK page of the Murmansk Youth Committee. They all wear sweaters with the letter Z, the symbol used by the Kremlin in its war against Ukraine.

In the background are Russian flags, many of them carried by Northern Fleet soldiers.

“Today, the Russian Army is fighting for the security of Russia and the whole world because Nazism has no borders,” the women say and add that “we will never betray our Russian soldiers, not matter how hard they try to stop us, the ones that put their own interests before truth.”

The video is only one of many examples of war propaganda now pouring over young people across Russia. Much of it is developed and financed by regional and federal authorities.

The Youth Committee in Murmansk is a unit under the regional government, and a key stakeholder in the development of regional youth policy. It has also taken an active part in international cooperation with the neighbouring Nordic countries, and first of all within the frames of the Barents Cooperation. For years, its representatives have been part of the Barents Youth Council, a body heavily supported by Norwegian funds.

Meanwhile, children and youth from the city of Severomorsk line up in the formation of the “Z.” Some of them are only about 10 years of age.

The children are members of Yunarmiya (Youth Army), the military youth movement established by Russian Minister of Defence Sergei Shoigu.

“Each and every member of the Youth Army […] is first of all an honest person of useful deeds and good heart, and therefore the Youth Army members from Severomorsk are ready to to provide support to our soldiers,” a post on the movement’s regional VK page reads.

Severomorsk is the city that houses the headquarters of the Northern Fleet, the most powerful of Russia’s navies.

Similar Youth Army ceremonies are held in other closed military towns in the region. In Zaozersk, a base for nuclear submarines, children and youth this weekend assembled by a local war memorial. They were carrying posters of the letter Z and V.

The ceremonies are held as military units from the Kola Peninsula are reported to have suffered major losses in the war. Last weekend, regional Governor Andrei Chibis visited the two brigades that are believed to be worst hit. During his visit to the brigade towns and other parts of the Pechenga region, Chibis carried a sweater with the Z.

A leading figure in the the regional Yunarmiya movement in Murmansk is Almaz Biktimerov. On the social media pages of the movement, Biktimerov can be seen together with children in uniform. He actively shares videos and photos of local youth militarization and war action from other parts of the country.

The war propaganda aimed at children and youth is overwhelming across the country. Schools have been requested to include special materials that describe Ukraine’s “genocide against Russians” and its “historical adherence” to Russia.

In Arkhangelsk Oblast, regional Governor Aleksandr Tsybulsky in this week’s meeting on patriotic upbringing underlined that “the West has declared a real information war against our country that openly allows for the pouring of dirt on our Russians, our Army and everything that is connected with Russia,” he informs on his Telegram channel

According to the governor, it is now important that our youth and school kids learn as much as possible about our country and Arkhangelsk Oblast.”

“This knowledge will definitely help them understand that Russia always was and always will be the most powerful country, and that this strength is based in unity and Russian patriotism.”