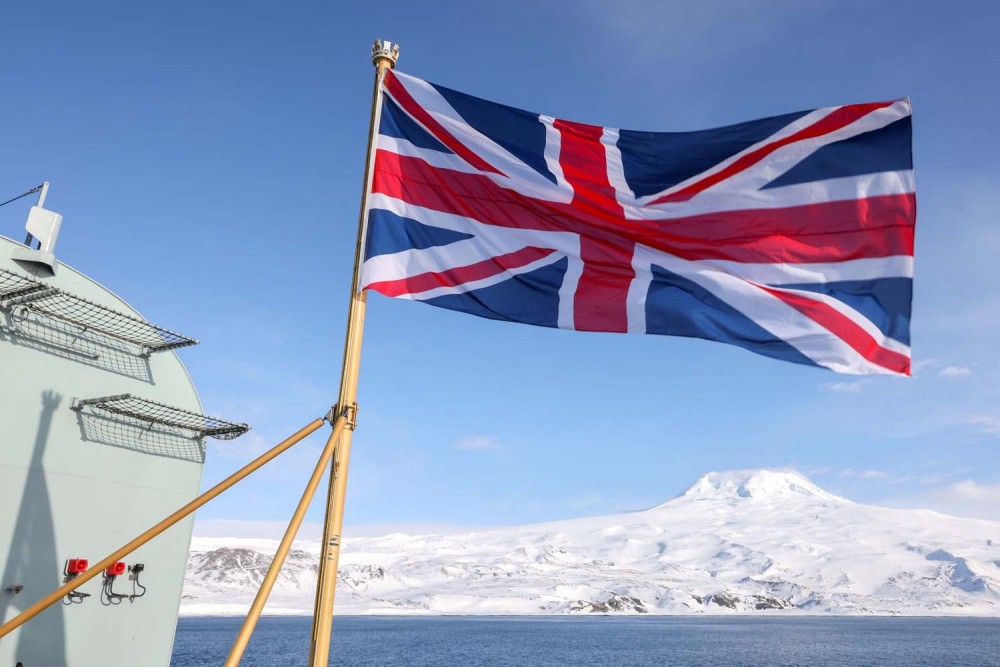 The volcanic island Jan Mayen is about 550 km north of Iceland and 450 km east of Greenland, deep inside the Arctic Circle. Official Norwegian activity on the island has been continuous since 1921 when the first meteorological station was established. Photo: Royal Navy

The "HMS Prince of Wales" made a rare visit to Jan Mayen before sailing deeper into the Arctic for harsh cold climate operations.
Read in Russian | Читать по-русски
By

NATO naval presence in the North Atlantic remains high after a series of exercises in Norway and Iceland. This week, Britain’s biggest warship made a stopover at Jan Mayen, the Norwegian outpost with 20 people working for the Meteorological Institute and the Armed Forces.

The “HMS Prince of Wales” and her escort frigate “HMS Richmond” left Reykjavik last weekend after participating in the Iceland-hosted exercise Northern Viking. Earlier this winter, the aircraft carrier was active in the waters outside northern Norway during Cold Response, NATO’s largest exercise inside the Arctic Circle since the 1980ties.

With Russia’s invasion of Ukraine, the exercises in the high north show the alliance’s renewed mission to deter the powerful Northern Fleet on the Kola Peninsula from thinking that important communication links between North America and Europe could be disturbed in times of war.

“The North Atlantic will always be in the UK’s home bear and so it is vital that we strengthen both our interoperability and our force integration with NATO and non-NATO partners in the region,” Defense Secretary Ben Wallace said as he visited northern Norway.

Seven crew members from “HMS Prince of Wales” flew with a helicopter and landed on Jan Mayen to meet the Norwegian personnel stationed there.

HMS Richmond’s commanding officer, Commander Chris L’Amie, said: “Having long studied and always been fascinated by the Arctic, it is a real privilege to step ashore in Jan Mayen, strengthening the ties between the UK and Norway, our NATO and Joint Expeditionary Force partner.”

For the Norwegians stationed on Jan Mayen, visitors are not too frequent. Supplies and change of personnel come with flights by military Hercules transport plane from the mainland to the airstrip next to the station.

In 2020, a U.S. Air Force team’s visit to Jan Mayen made headlines. The American military specialists came to the island to inspect the runway to assess whether larger U.S. Air Force transport planes could land there or not.

For Russia, access to the deeper Norwegian Sea from the shallow Barents Sea is considered strategically important in the so-called bastion defense concept, aimed at protecting the country’s fleet of nuclear ballistic missile submarines.

After her visit to Jan Mayen, the “HMS Prince of Wales” together with the frigate “HMS Richmond” now sail even further north. The Royal Navy, however, is not detailing the current whereabouts of the warships.

The ship will continue north for further cold weather tests in the coming days before returning to the UK, is all the British Navy would say.

Meanwhile, along the coast of Troms in northern Norway, a U.S. amphibious combat group will on Monday kicks off joint winter training with Norwegian troops.

In case of war, Norway depend on reinforcement from allied forces.

“Receiving and joint training with allied forces is very important and contributes to high operational readiness. Norway, and especially parts of Nordland and Troms regions, are favorable training areas for several of our allied forces,” said Lt. Gen. Yngve Odlo, head of the Norwegian Operations Headquarters.