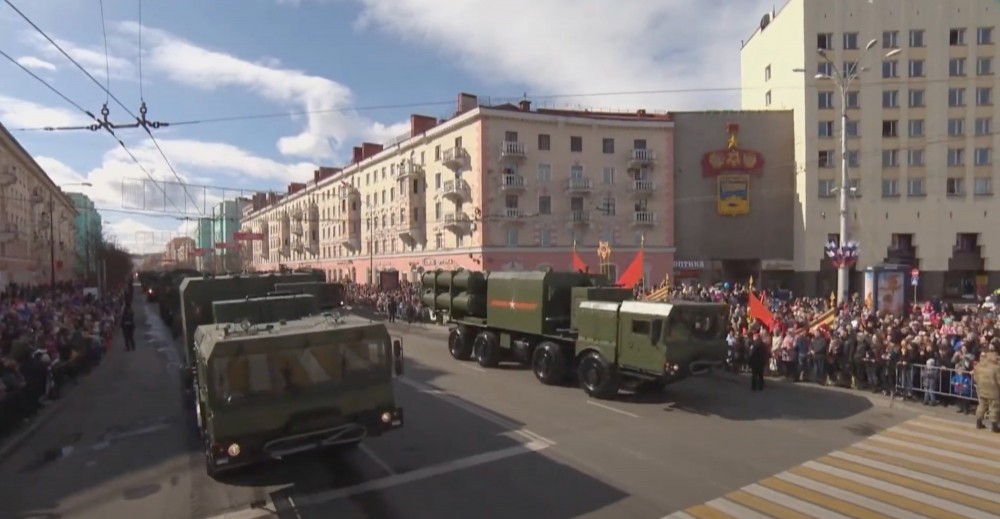 The Bal coastal missile defense system on display in the Murmansk 9th of May parade. Photo: screenshot from video

For the first time, the 9th of May military parade in Murmansk included the coastal missile system Bal and coastal radar system Monolit-BR. Both can be deployed near the border to Norway.
Read in Russian | Читать по-русски
By

Thousands had gathered in downtown Murmansk for the local 9th of May military parade. They were presented with some of the most threatening heavy weapons and military tech of the Northern Fleet, the most powerful of Russia’s four fleets.

However, the armament on display slightly differed from previous years. In this year’s parade was not a single UAV, Arctic snowmobile or air defense system Pantsyr S1, video from the parade reveals.

Instead, the parade included several other kinds of hardware. Among them were two units of the Bal coastal missile system.

The Bal (NATO name SSC-6 or Sennight) was  in 2019 first deployed in the border area to Norway. From the Sredny Peninsula on the coast to the Barents Sea, the missiles can hit Norway’s Globus 2 radar in Vardø in only few seconds. The Bals are believed to be stored at the missile division of the Northern Fleet’s 536th Coastal Missile and Artillery Brigade in Snezhnogorsk, west of Murmansk City.

In the parade were also new Monolit-BR coastal defense radars. The system was presented to the public in 2019 and believed to have been deployed in the Northern Fleet very recently. The Monolit-BR is designed to provide over-the-horizon (OTH) tracking of surface vessels and low-flying aircraft.

Unlike previous years, the parade did not include Pantsyr S1, the mobile air defense system. It is a known fact that this military hardware is applied by Russian forces in Ukraine. Also other military hardware from the Northern Fleet is being applied in Ukraine, including the T-80BMR tanks, howitzers and armored personnel carriers.

According to reports from Ukraine, the 200th Motorized Infantry Brigade based in the border town of Pechenga has suffered serious losses in the fights. Sources claim that several hundred men might have been killed in assaults on Kharkiv in the first weeks of the war, and photos show burned-out T-80 tanks.

The war against Ukraine strongly affected this year’s 2WW victory celebrations across Russia. In Moscow, President Putin addressed his soldiers fighting in Ukraine, saying that they battle for the “future of their motherland,” and against “butchers, death squads and Nazis.”

In Murmansk, also Head Commander of the Northern Fleet Aleksandr Moiseev in a broadcasted speech underlined that Russia is now in a fight against Nazism.

“Today, soldiers and officers of the Russian Army are fulfilling their military duties on the frontlines against the followers of Nazism, and in a trustworthy way protecting the national interests of Russia as part of the special military operation in Ukraine,” he told the local audience.

“I wish you all good health, happiness and new military achievements for the motherland,” Moiseev proclaimed.

The admiral was echoed by Governor Andrei Chibis. “Unfortunately, our country has once again had to fight Nazism. But I am confident that our protectors, our soldiers, our honorable fighters of freedom will win the battle. The victory will definitely be ours.”

The Governor’s speech followed shortly after his meeting with combatants from the National Guard returning home to Murmansk from Ukraine. “You are the honourable descendants of Victory, our countrymen that today fight with the manifestations of Nazism and protect the interests of our country and its inhabitants,” Chibis told the Rosgvadiya fighters.

Governor Chibis has since the onslaught on Ukraine started 24th of February been a strong and outspoken supporter of the war.

However, the governor now appears to have modified his his pro-war activism. He no longer travels around in the region with a “Z” on his chest and also no longer marks his social media posts with the war symbol. Until recently, practically all his posts on VK and Telegram were marked with the “Z” and “V.”

The 9th of May was actively celebrated also in the many military towns across the Kola Peninsula. Ahead of the celebrations, the town administration of Gadzhievo posted a greeting from three soldiers fighting in Ukraine.

“Dear veterans, we congratulate you with the celebration of the great victory. We want to wish you strong health, long living and we can assure you that the victory will be our’s,” the men say.

On the same page is a film about Epistiniya Stepanova, the woman who lost all her 9 sons in 2WW action.

Meanwhile, across Murmansk new war propaganda posters were hung up, including one showing “Babushka Z”, the new symbol of Russia’s war against Ukraine.

And in the neighboring town of Zaozersk children from the local kindergarten were dressed up in uniforms and paraded down the local street together with armed military men.

It is not the first time that small children are marching in Zaozersk. “It is becoming a tradition,” the town authorities say.