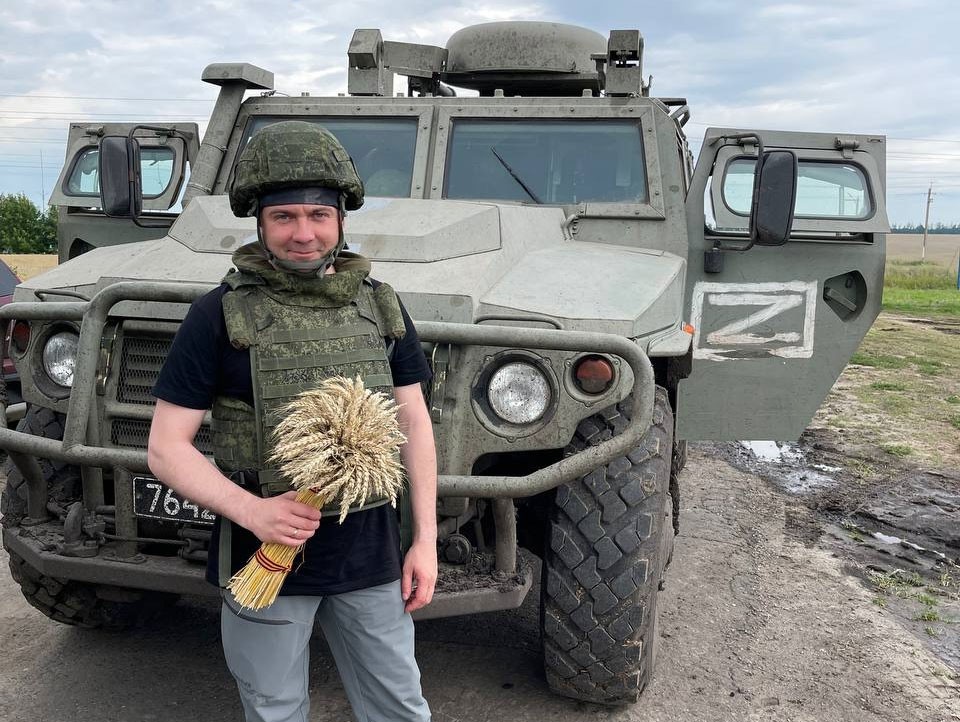 The leader of the far northern Russian region goes to occupied territories where he meets with rebel leaders and offers support for further aggression against Ukraine.
Read in Russian | Читать по-русски
By

“Today I have worked in Donetsk, which again was subjected to bombardment,” Andrei Chibis says in a comment on social media. “I am ok, and it [the bombardment] did not stop us,” he underlines.

During the visit, the governor met with Denis Pushilin, Moscow’s puppet leader of the area.

A video published at Chibis’ VK page shows how he and his deputy first met with Pushilin and his team and later walked in the streets of the occupied city. During the visit, Chibis gave Pushilin a present; small replica of a nuclear submarine from the Northern Fleet.

According to Chibis, companies from Murmansk will in the course of the next month outline an economic support package for the occupied territories.

Together, the two men also attended the funeral of Olga Kachura, the rebel warrior and so-called Hero of Russia and DNR, that recently died in battle. Reportedly, downtown Donetsk was bombarded during the funeral.

“This shows how the Ukrainian nationalists are all scumbags,” Chibis says on Telegram.

Chibis not only visited Donetsk, but also the Kharkiv region, photos from his Telegram channel show.

The governor’s social media posts about the visit to the war zone are overwhelmed with positive reader comments. But there are also a few critical voices. A woman warns Chibis about spending regional budget funds on projects in Donetsk.

“Please, when you discuss support for the Donetsk people’s republic, do not forget about Murmansk Oblast. Here, floors are collapsing and people fall into the basement when they wash themselves in bathrooms, ceilings are falling apart and buildings crumbling,” she writes.

During the visit, Chibis wore a sweater with a large “Z,” the symbol of Russia’s war against Ukraine.

The regional leader of Murmansk has since the Russian onslaught on the neighbouring country expressed full support for the aggression. Ahead of this week’s visit to Donetsk, Chibis posted a video on his VK page that shows Russian warriors shelling civilian housing quarters in Mariupol. In the video is also a comment from a Northern Fleet soldier that takes part in the offensive.

“The best regards from the whole command of the Northern Fleet,” the soldier says. “We are executing orders and will bring no disgrace to the Fleet,” he adds.

Soldiers from the Northern Fleet brigade have fought to take a height in the area, he explains. A helicopter and two tanks have been lost in the battles.

“We are now going into combat and we will manage, everything is fine,” he says.

Massive troops and equipment have been sent from the Kola Peninsula to the battles in Ukraine. Losses have been dramatic. Several hundred men from the local brigades are believed to have been killed in combat with Ukrainian troops, a big number of them in the first days of the onslaught.

Only few days after the start of the war, Governor Chibis paid a visit to the worst affected brigades in the Pechenga area.

In late July, Chibis was back in the area, his Telegram channel informs. This time together with Northern Fleet Head Commander Aleksandr Moiseev. He visited both the 200rd Motorised Rifle Brigade and the 61st Naval Infantry Brigade in Sputnik.

He also met members of a new unit of so-called voluntary fighters, and promised that the region would provide material and technical support for the warriors.

Chibis’s visit to the occupied Ukrainian territories is likely to result in international sanctions against him. Recently, the UK put a big number of Russian regional leaders, among them the governors of the far northern Komi and Yamal-Nenets regions, on its sanctions list. The sanctions followed the governors’ visits to the so-called Donets and Luhansk peoples republics.