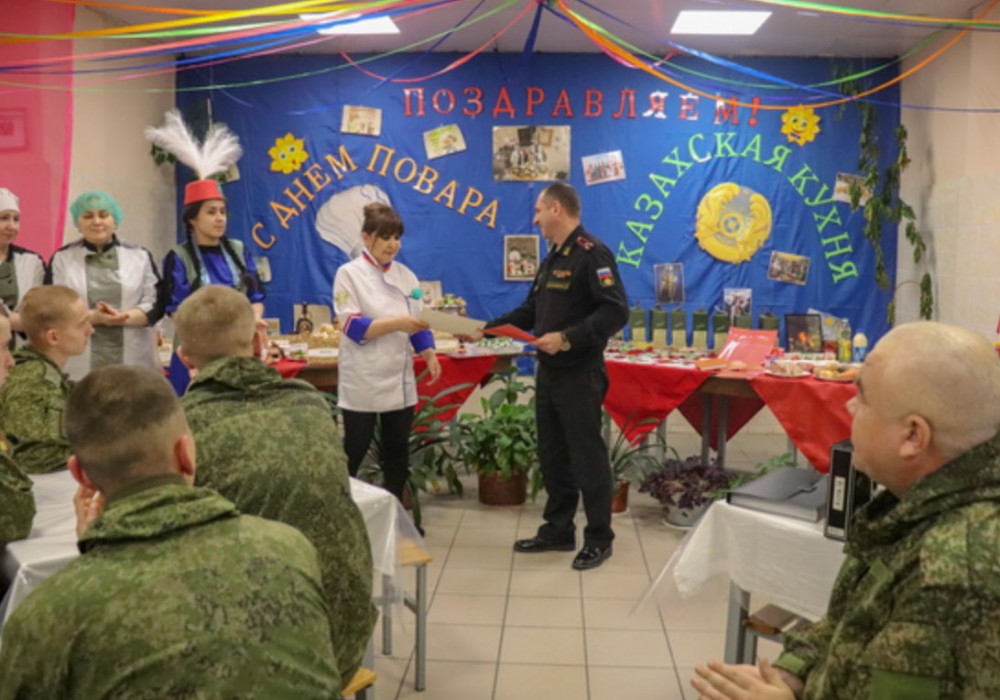 Congratulations with the Chefs Day! Kazakh cuisine (not Ukrainian) on the menu as chefs from the 200th Motorized Rifle Brigade in Pechenga invite reservists for a feast. Photo: Northern Fleet

There was a feast in the dining halls of the 200th Motorised Rifle Brigade as army cooks served traditional Kazakh food to mobilised reservists in connection with International Chefs Day.
Read in Russian | Читать по-русски
By

There was a high spirit in the canteens of Pechenga this weekend. In connection with International Chefs Day, the local cooks had decided to serve mobilised reservists a special treat, the Northern Fleet informs.

Ahead of their departure to war, the men were served traditional food from Kazakhstan. And during the meal, female dancers dressed up in oriental-like costumes performed sensual dances and navy musicians played joyful patriotic songs.

Several hundred mobilised reservists are currently undergoing training in Pechenga, the Navy town located near Russia’s border to Finland and Norway. Many of the men are from the north Russian regions of Murmansk, Arkhangelsk and Komi Republic. They will soon be deployed in occupied areas of Ukraine.

According to the Northern Fleet, the different Brigades in the Kola Peninsula were using the occasion of the Chefs Day to serve their men traditional food from the Post-Soviet space, including from Armenia, Belarus, Tatarstan and Kazakhstan.

The 200th Motorised Rifle Brigade got the Kazakh cuisine. Photos from the dining halls in Pechenga show Kazakh flags on the tables and plenty of food on the plates.

None of the brigade units were told to prepare Ukrainian food, it appears.

The feast was completed with awards to the chefs. Head of the Northern Fleet’s food supply unit Sergei Ostrozhkov greeted the cooks with diplomas.

The carefully staged food show in the dining halls of Pechenga comes as soldiers and relatives report about a serious lack of equipment and foodstuff among mobilised men.

According to one woman, the authorities have “not provided the reservists with anything,” not body armour, nor helmets or first aid equipment.

“Where are the promises you gave them, that you “will not let them down”? a woman asks Murmansk Governor Andrei Chibis.

However, the Northern Fleet underlines that everything is being provided and that there is food in abundance.

In the Northern Fleet’s report from the army canteen in Pechenga, reservists underline that food is “much better than it used to be,” and that they are being fed “almost like home.”