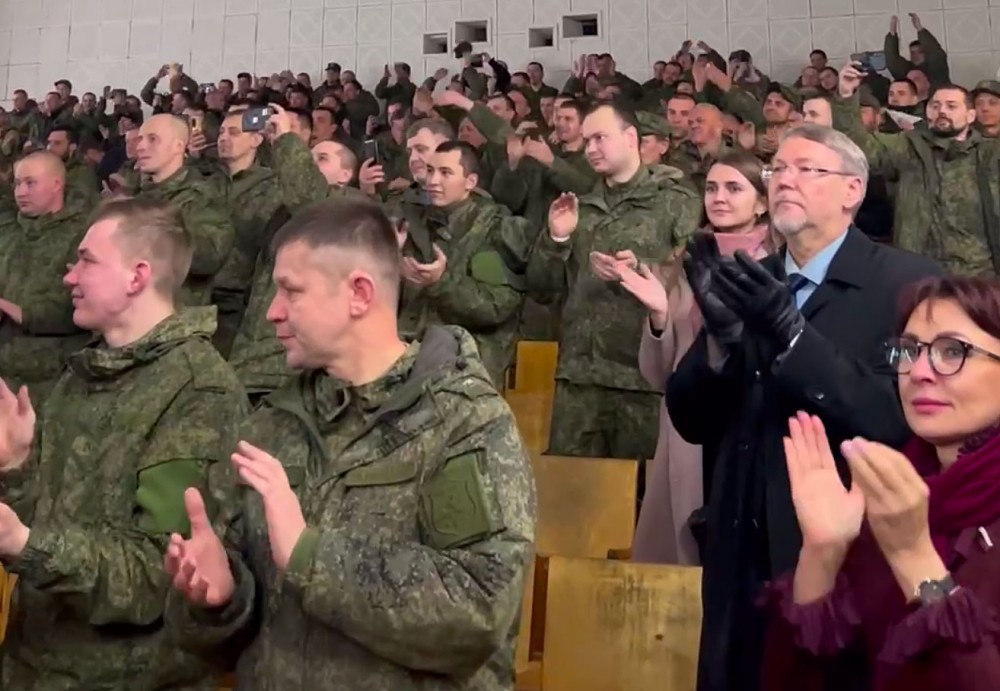 The concert hall in Zapolyarny was packed with mobilised soldiers as the Northern Fleet and the local Youth Committee organised a farewell program.
Read in Russian | Читать по-русски
By

At least 200 reservists were in the room when a local group staged a music show ahead of the men’s departure to Ukraine.

On the stage were three singers accompanied by dancing soldiers in uniform, and on the concert repertoire was the song “Donbas is with us.”

“Again Russian power is in our hands,

Both life and death for the Motherland is beautiful.

stands and holds the heavenly sky for centuries,” the women sang to the cheering audience.

And then the chorus:

“Half the sky is in flame,

Donbas is with us,

Russia is with us,

And with us God.”

The song was originally composed in connection with the 77th anniversary of Soviet liberation of Donbas from Nazi German forces in 1944, and was first performed in 2020. It soon became a major hit in Russia, and the original version today has almost 10 million views on YouTube.

Russian nationalists quickly proposed that it should be declared as the “national anthem” of the so-called Donetsk People’s Republic, the puppet region that on the 24th of September was officially annexed by Russia.

The three singers in Zapolyarny were dressed in tight suits in camouflage colors.

“We may be destined to die on the cross,

But we will never be put on our knees!

In the bloody field we are one for all

We stand and hold the heavenly sky of Donbas,” the last verse of the song reads.

Several more artists performed at the event. Among them was Svetlana Lazarava, the 60 year old pop diva.

In the concert hall was also Tatiana Kusaiko, the State Duma representative from Murmansk. Kusaiko, who is member of the Duma Defense Committee, has over the past months actively attended a number of patriotic-style events in the Kola Peninsula.

“Our men are unbelievably strong,” she said in a social media comment to the concert in Zapolyarny. A video shows herself standing clapping among the soldiers. Next to her is Andrei Vinogradov, lecturer at Russian knowledge society “Znaniye,” the organization established by President Putin in 2015 to engage in “mass enlightenment” among Russians.

The men in Zapolyarny clapped with the music and many appeared joyful and happy. Their reality will soon change dramatically. Many will be sent to the frontline and many will lose their lives.

In the course of eight months of war, several hundred men from brigades in the Kola Peninsula have been killed on the battlefield. Already during the first weeks of the onslaught hundreds of killed soldiers were reported from the Arctic regiments of the Pechenga valley. It has later become known that at least 1,274 men from the region have lost their lives.

The concert was organized by the Northern Fleet in cooperation with the Murmansk Youth Committee. According to the organizers, the concert was held to “lift the fighting spirit of the warriors.”

The soldiers invited to the event are all undergoing training in the nearby shooting ranges in Pechenga, and will soon be sent to the battlefields in Ukraine. Many of them come from north Russian regions, among them Murmansk, Arkhangelsk and the Komi Republic.

They are told that they will fight “Americans and their allies.” Now, they are themselves located only few kilometer from the border to NATO country Norway.

Zapolyarny is border town and has until recently engaged in extensive cross-border cooperation with the neighboring Nordic country. The concert hall where the soldiers were applauding patriotic songs about Russia’s ‘divine mission’ in Donbas has itself repeatedly been site for cultural performances with Russian and Norwegian children and youth.

Back then, the tones and tunes performed were of a peaceful and friendly kind.