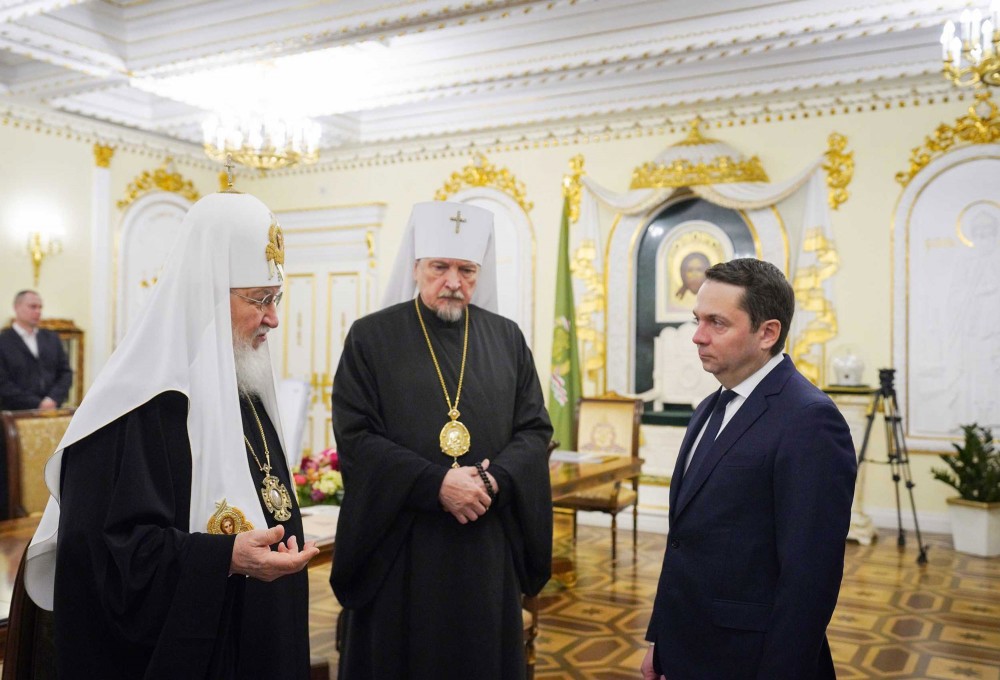 Support for troops and military towns in the Kola Peninsula is a 'holy mission,' Murmansk Governor Chibis said as he met Patriarch Kirill in Moscow.
Read in Russian | Читать по-русски
By

There was golden decoration on the walls and an icon of Christ in the background as Governor of the far northern Russian region this Thursday sat down in a meeting with the top prelate of the Orthodox Church.

The meeting with Governor Chibis was scheduled shortly before the Patriarch’s reception of Dmitry Medvedev, the former president and prime minister, now Deputy Head of the Russian Security Council.

Both Kirill and Chibis are strong supporters of the aggressive onslaught on Ukraine, and the war was a key issue in their talks.

According to Governor Andrei Chibis, they discussed support for mobilized reservists and their families, as well as a much-needed modernization of military towns in the Kola Peninsula.

Among the latter is Pechenga and Sputnik, the garrison towns of the 200rd Motorized Rifle Brigade and the 61st Naval Infantry Brigade respectively. Both brigades have had major losses of men and hardware on the battlefields.

Also the naval bases that house sailors of the Northern Fleet are in dire need of upgraded social infrastructure, Chibis underlined.

“I know, I have been there myself,” the Patriarch responded with reference to his visit to Pechenga in 2016.

Judging from a video from the meeting, Chibis called the upgrade of the towns a ‘holy mission,’ and outlined how the regional brigades not only actively participate in the war in Ukraine, but also how the Northern Fleet’s submariners protect the country from the north.

Andrei Chibis was accompanied by Metropolitan Mitrofan, the hardline regional church leader that repeatedly has called the onslaught on Ukraine a war against Antichrist and  “a United force of evil.”

On the meeting agenda of Chibis and the Patriarch was also the projected construction of a cathedral in downtown Murmansk.

Kirill wants a grand landmark in the far northern city that borders on Nordic countries.

“Murmansk - this is a city that has visitors from the whole world, and the people that arrive from the West must see not a bad copy of something that they have back home, but a unique building, a symbol of the country and the city,” the Patriarch underlined in the meeting.

“With its history and present, Murmansk deserves such a cathedral […] We need to make something strong, sharp, beautiful and absolutely unique with regard to its location, culture, people,” he added.

According to Governor Chibis, the regional government and the Church “will work together with this project.”

“The most important of all is that Patriarch Kirill understands all specifics of the Murmansk region,” he explains.