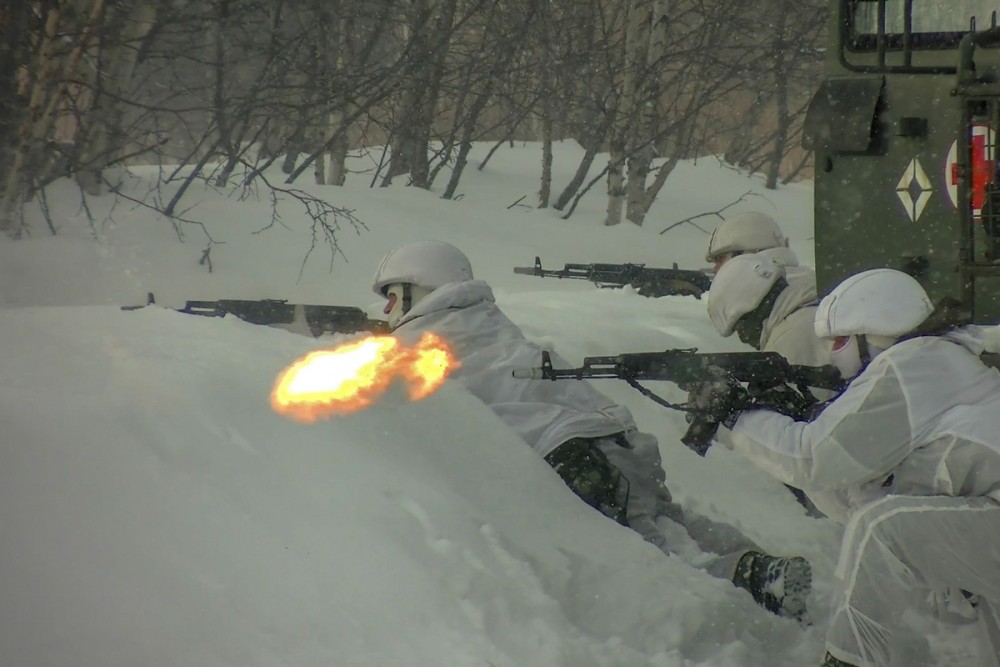 Soldiers with Russia's 61st Naval Infantry Brigade on winter training in the Pechenga region, a few kilometers from the border with Finland and Norway. Photo: Northern Fleet

The Russian Defense Minister argues that "retaliatory measures are required" as Finland and Sweden now join NATO.
Read in Russian | Читать по-русски
By

New military bases will be created in the western regions, Sergei Shoigu said at a meeting Wednesday between top military leaders and President Vladimir Putin.

“Given NATO’s desire to build up military potential near the Russian borders, as well as to expand the North Atlantic Alliance at the expense of Finland and Sweden, retaliatory measures are required to create an appropriate grouping of troops in Northwest Russia,” Defense Minister Shoigu said.

Barents Observer previously reported that thousands of soldiers from the Kola Peninsula were deployed to the battlefields and hundreds of them are killed in action. Especially the 200th Motorized Rifle Brigade of the Northern Fleet ran into big losses during the first weeks of the war last winter.

The 200th and the 80th brigades on the Kola Peninsula are part of the Northern Fleet military district which geographically covers the northwestern regions and the waters along the Northern Sea Route. The brigades are specialized in Arctic warfare and equipped with weapons and vehicles for operations in harsh winter climates.

Shoigu added that the coastal troops of the Navy, with existing marine brigades, will form five divisions of the marine corps. Also based near the border to Norway and Finland in the Pechenga region, Russia’s 61st Naval Infantry Brigade has contributed with soldiers both in Syria and Ukraine.

Listing the priority tasks for next year, the defense minister highlighted the war on Ukraine, by him named “the special military operation.”

“It will continue until the tasks are completed,” Sergei Shoigu said.

He then stressed the importance of training and exercises. Special emphasis will be given to what Russia’s defense minister claims are “threats associated with the further expansion of NATO to the East.”

Sergei Shoigu was sitting next to President Putin and Chief of Staff of the Armed Forces, General Valery Gerasimov.

While Shoigu presented plans to increase the country’s number of soldiers from today’s one million to 1,5 million, President Putin said Russia had “no funding restrictions.”

“The country, the Government give everything that the army asks for, everything. I hope that the answer will be properly formulated and the corresponding results will be achieved,” the President said.

Putin admitted that the September 21 partial mobilization revealed certain problems, but assured the necessary measures are taken. That both includes improved interactions between local and regional authorities as well as weapons supply to the mobilized personell.

The Russian edition of the Barents Observer recently told the story of a soldier participating on the battlefield. He said there is a lack of everything; food, uniforms, weapons, radio communication and moral.

Vladimir Putin ended his speech by thanking civilians for providing additional equipment, warm clothes and gifts to the soldiers in the front lines.

“Even if the Ministry of Defense provides everything necessary in some segments, we send a big thank you to people for this respect.”

Russia has admitted to just 5,937 military deaths in Ukraine. Western estimates put the figure at about 100,000.