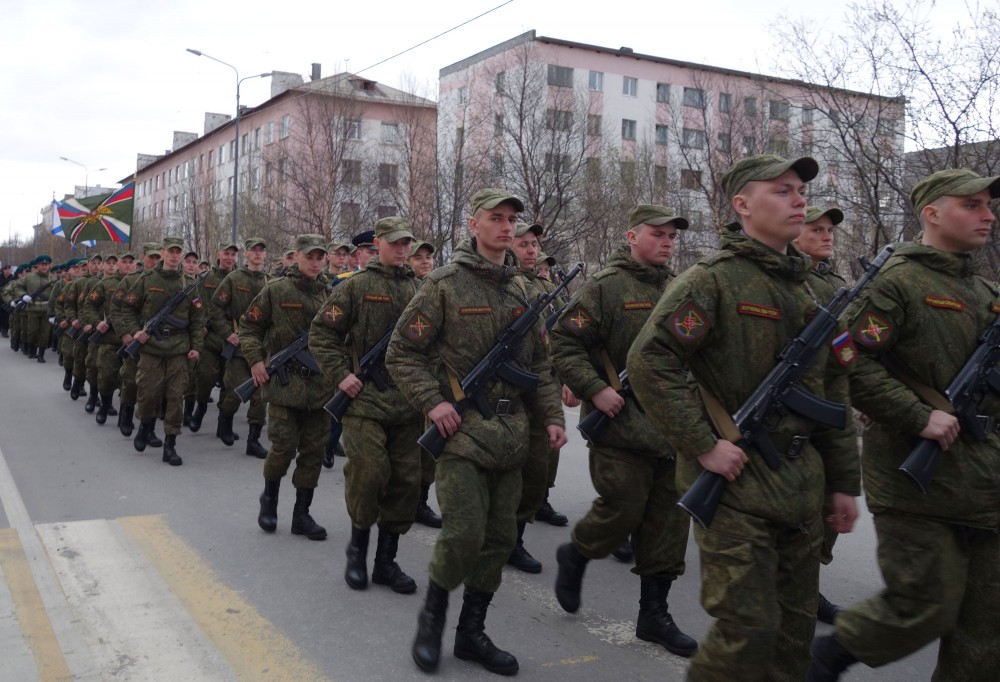 Soldiers from the 200th Separate Motor Rifle Brigade ran into deep trouble when ordered to invade Ukraine on February 24. Hundreds are killed and Russia's land forces on the Kola Peninsula are today partly decimated. This photo from a May 9th celebration in the town of Nikel, only a few kilometers from the border to NATO member Norway. Photo: Atle Staalesen

If Vladimir Putin really was afraid of NATO you would have thought one of the last brigades he would order to invade Ukraine was the one protecting the border near Russia’s nuclear submarines on the Kola Peninsula. He chose otherwise.
Read in Russian | Читать по-русски
By

The Barents Observer has since February 24 reported that Russia’s 200th Separate Motor Rifle Brigade has lost hundreds of soldiers on the battleground in Ukraine.

Facts are even grimmer. It was worse.

The Washington Post has now compiled a comprehensive overview of what is known from the bloody fighting. The newspaper has seen internal brigade documents and concludes that the 200th, one of Russia’s two prestige Arctic brigades, is practically ‘wiped out’.

Fewer than 900 soldiers were left in late May of what originally were two battalion groups consisting of 1,400 to 1,600 men.

Others were wounded and hospitalized. Some escaped and ran away, the Russian military papers noted.

Over the latest few years, the 200th received some of the most modern armored vehicles in the Russian army. Some were especially promoted to operate in harsh Arctic climates. The brigade was among the first to get the new T-80MVB tanks.

At the battlefield north of Kharkiv, many of the vehicles were destroyed or captured by the Ukrainian army.

“The unit is in a state of decay,” one soldier with the 200th told the Washington Post.

He was among the men drafted after Putin’s September 21 mobilization. The man detailed how he and his fellow soldiers got painted helmets from 1941 and vests without plates, not at all bulletproof.

“They are not even training us,” he said to the newspaper.

The 200th is based at different camps in the Pechenga region, some 10 to 15 kilometers from the border with NATO-member Norway.

In January, the first rail wagons left the station in Lustari, carrying tanks, armored vehicles and soldiers. They were told the mission was to take part in an exercise in southwest Russia.

It could have been a positive change from the cold dark winter far inside the Arctic Circle.

Only at 3 am on February 24, the soldiers were informed there would be fightings. A few hours later, they were all on the Ukrainian side of the border. And fighting came outside Kharkiv.

Dozens of soldiers were killed or wounded on the first day. Tanks and equipment were destroyed.

On March 2, the Odessa Journal could report about the 1st battalion-tactical group of the 200th brigade being defeated by Ukrainian forces.

The Commander of the brigade, Colonel Denis Kurilo, was severely injured, according to medical files seen by the Washington Post.

The Barents Observer in July reported that at home, in the Pechenga region, the 200th scrambled to form a new mixed volunteer battalion. The new soldiers sent to the battlefield were some navy sailors, and others were reservists and veterans.

According to social media posts, the new soldiers got little training before heading to fight in Ukraine. Similar volunteer battalions were sent from different remote regions in Russia.

The 200th has lost 18 of its 26 T-80BVM tanks and dozens of other armored vehicles. It will take years to rebuild the former strength of the brigade whose main mission was to protect the buffer zone between the country’s border with Norway and the strategically important ballistic missile submarines along the coast to the Barents Sea in the Murmansk region.

Colonel Pavlo Fedosenko, commander of the Ukrainian 92nd Mechanised Brigade said to the Washington Post that “nothing that brigade is left. It is completely wiped out.”

Russia itself has published very little information about its massive losses of soldiers after Putin launched the unprovoked attack 10 months ago. Earlier in December, the Barents Observer published a list of the few northern Russian men killed in action. The sources were regional governors and local media.

Most killed of the young soldiers killed on the battlefield, never made it home to funerals. They were burnt to ashes inside tanks and transport vehicles hit by anti-tank weapons or are left on the battlefields as the Russian forces withdraw from the frontlines.