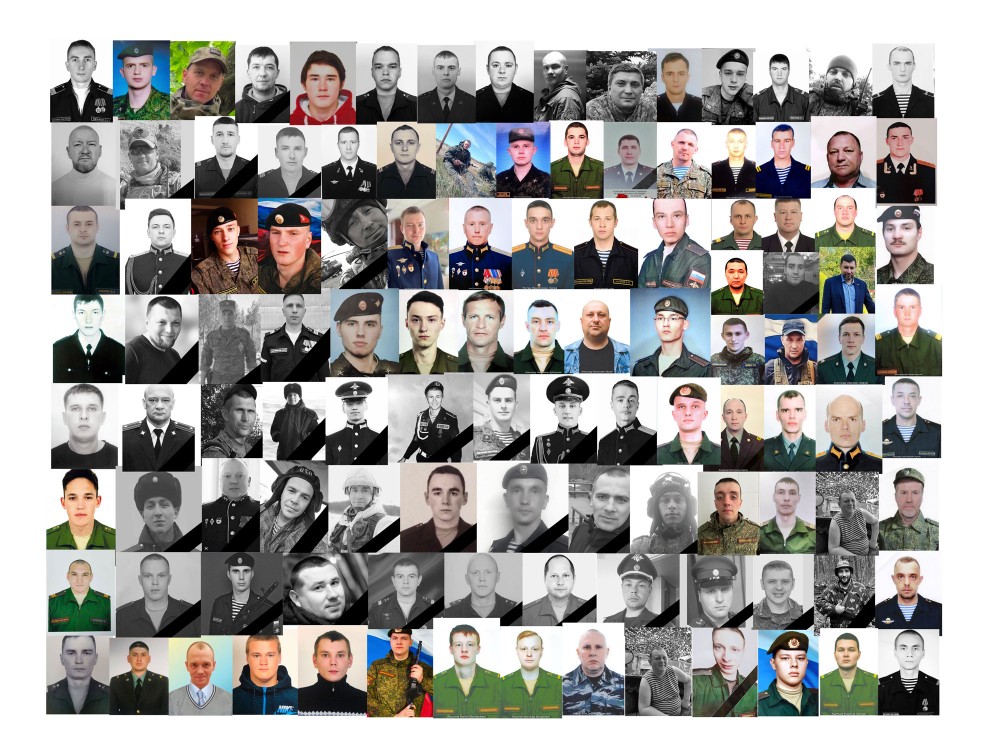 Soldiers from the Murmansk, Arkhangelsk and Komi regions killed in Ukraine. Photo collage by the Barents Observer

A big number of them were recruited from provincial towns and villages located far from the regional capitals. Many were in their early 20s.
Read in Russian | Читать по-русски
By

“These guys are heroes of the North, that chose to fight Neo-Nazism and gave their lives in battle with Evil. We must know their names. We must commemorate their bravery,” Murmansk Governor Andrei Chibis said about Corporal Aleksei Baysov, Sergeant Aleksandr Sadovsky and Officer Aleksei Demenshin.

The men lost their lives in the war this summer and were presented on the governor’s VK page in late August.

Baysov, Sadovsky and Demenshin are three of many locals from the Kola Peninsula that have been killed in Russia’s bloody onslaught on Ukraine.

The Barents Observer has compiled the names of the men reported dead by the Governors of the Murmansk, Arkhangelsk and Komi regions. The list includes photos, names and available information about the soldiers’ home towns, military units and place of death.

The list is available in photo slideshows here and here.

It includes all men reported killed in the period from the 24th of February until 1st of December. However, it is far from complete. Many more North Russian men are believed to have lost their lives in the war. Many still lie in Ukrainian fields. Many will never be found. Some names are not disclosed of various security reasons.

Still, the list gives certain indications about the kind of people sent to war from the three northern regions.

From the very first days of the onslaught, a big number of soldiers from the Russian north were killed. Many belonged to brigades in the Kola Peninsula, and the 200th Motorized Rifle Brigade in Pechenga is believed to be among the worst hit. Several hundred men are believed to have lost their lives. Men from all over Russia serve in the brigade.

Governor Chibis of Murmansk, Aleksandr Tsybulsky of Arkhangelsk and Vladimir Uiba of Komi all use social media services VK and Telegram to announce the death of local men. Governor of Komi Vladimir Uiba even launched his Telegram channel in connection with the start of the war.

“The international situation is now extremely tense. It is a game-changing moment for the whole world, for Russia and for the Komi Republic in specific,” he wrote in his first post on the 10th of April. Uiba has subsequently appeared hundreds of times in video messages dressed in uniforms marked with Nazi-inspired symbol “Z.”

The first killed Komi soldier was reported by Governor Uiba only two days later. On the 12th of April Uiba informed about the loss of Vladimir Nosov, the Commander of an Air Assault Unit under the Baltic Fleet. Nosov took part in the initial attacks on Ukraine and “died heroically,” Uiba wrote. He was post-mortem awarded a medal as Hero of Russia.

The loss can be justified, Uiba argues.

“Our fellow countrymen are leaving [this world] fulfilling their duties, thus showing true love for the Motherland,” he said. “It is an example of devotion to the cause and one’s country conveyed to us so that each and every of us can seek to reach this spiritual height,” he explained.

A total of 60 killed men from the Komi Republic have been reported by Uiba. Murmansk Governor Chibis has posted information on his VK page about 37 men, and Governor Tsybulsky has informed on VK about 34 men.

Many of the governors’ messages come without condolences to relatives, but rather with gratitude for the “bravery” in service for the state.

Practically all the posts include photos and a short text about the men. In almost every case, the governors highlight the soldiers’ “heroic deeds”, their patriotism, their “fight against Nazism” and great contribution to the Motherland. In many cases, the men’s place of origin and the name of their troops have been added.

The first fallen men were reported by Governor Tsybulsky on 7th of March. Sergeant Anatoly Shchekoldin was part of the first airborne troops that attacked Ukraine. The governor of Murmansk informed about his region’s first loss on the 17th of March.

In certain periods, the governors have hardly reported any new case. For example, in all of November, the Governor of Arkhangelsk did not inform about a single new soldier killed.

A significant number of the warriors come from villages far from the regional capital cities. In Arkhangelsk, as many as 26 of the 34 men are reported to come from provincial towns and villages. In Komi, at least 41 of the 60 men come from smaller towns and the countryside.

They are young. Judging from photos, at least half of the men appear to have been only in their early 20s.

Many of the men adhere to Russia’s elite forces. For example, on the list is a number of warriors from Russia’s airborne troops. Among them is Viktor Bulatov, a young man from the village of Cherevkovo in Arkhangelsk region. Bulatov was enrolled in the airborne troops in Ryazan in 2014 and was later moved to an airborne intelligence unit in Tula, Governor Tsybulsky informs.

“Bulatov showed true bravery and heroism and died fulfilling his military duty. […] Eternal peace for this real warrior and patriot of Russia,” Tsybulsky writes on his VK page.

Tsybulsky is himself a military man with about ten years of service in the Armed Forces.

A significant number of the men killed have fighting experience from Chechnya, some also from Syria and other countries.

Many of the fallen were professional soldiers serving on contracts. In some cases, the names of their units and military branches is reported. More than ten of the men are reported to have been part of the Russian airborne troops, another 16 in infantry units. Several men were tank operators, some communications personnel and some part of the missile forces.

Many of the men, also the ones from Arkhangelsk and Komi, adhered to brigades in the Kola Peninsula, and first of all the 200th Motorised Rifle Brigade and the 61st Naval Infantry Brigade.

Among them is Aleksandr Maskiev from the village of Ust-Kul in the Komi Republic who served as tank commander in the 200th Brigade and Artyem Shurku from Murmansk that on a photo is seen carrying the beret and uniform of the 61st Naval Infantry Brigade.

Many of the governors’ messages have triggered massive responses on the social media. The posts by Murmansk Governor Chibis have been seen by several hundred thousand people and commented on by many hundreds. Far from all the responses have been supportive, some of them outright critical with condemnation of the war.

“For what purpose and for whom did they die?” a man who reportedly has his own son fighting in Ukraine asks.

“They were sent there by a crazy führer that invented Nazis, Fascists and banderites. Our young men are victims, they could have lived, raised kids and made their parents happy, but now until the end of their days is only pain and tears. Let the man who unleashed this war perish,” a women writes.

Click in the below slideshow to see all names. A second slideshow with more names is available here