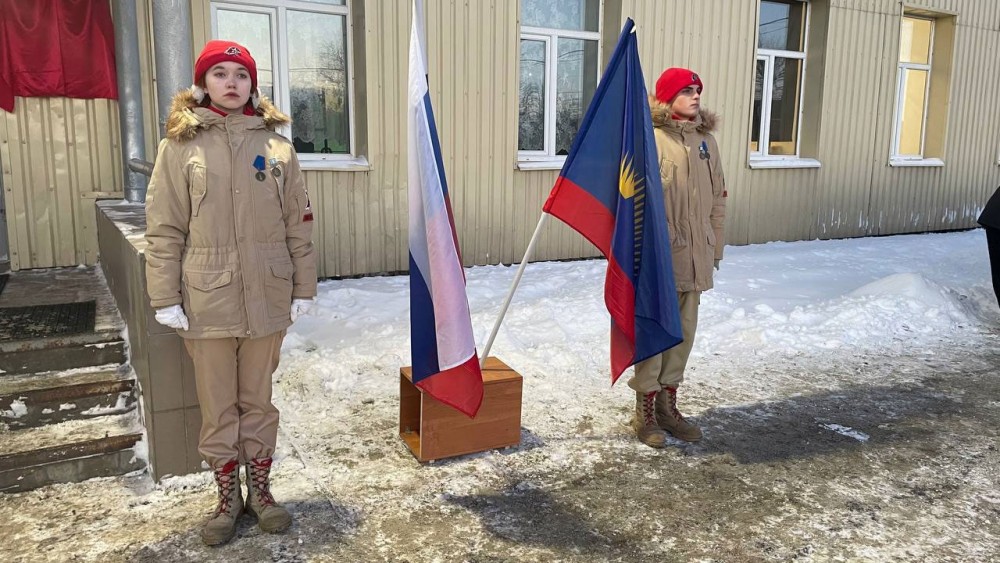 The Russian unit headed by Mikhail Popov reportedly eliminated more than 150 Ukrainian soldiers in a battle near Kharkiv. The warrior now gets a school named after him in his Arctic home town of Pechenga.
Read in Russian | Читать по-русски
By

Mikhail Sergeevich Popov was born in naval infantry base Sputnik and graduated from School No 5 in nearby Pechenga. The 32 year old soldier is now honored in the small town located near the border to Norway and Finland.

School No 5 will from now carry his name. In a ceremony attended by Murmansk Governor Andrei Chibis and top representatives of the Northern Fleet, a name plate with his photo was unveiled on the school building.

Popov has survived fierce battles on the occupied Ukrainian lands. Following his deployment in the Kharkiv region in early May,  he reportedly commanded Russian motorized infantry units that were attacked by powerful Ukrainian forces near the village of Slatino.

According to the Russian Armed Forces, Popov and a small group of fighters for three days stood against “an overwhelming force of Ukrainian nationalists.” As a result of the battle two tanks and about 150 enemy infantry soldiers were eliminated, the military reports.

Captain Popov and his unit reportedly five times pushed back attacks by intelligence and sniper groups of Ukrainian special purpose forces and so-called Kraken units. According to the reports, he twice called in artillery and air attacks on his positions and thus caused “irreparable damage on the attacking enemy.”

Popov is now actively promoted as a warrior hero and a symbol of Russian bravery. The actual events around him can not independently be verified.

Soldiers from the 200th Motorized Rifle Brigade has been deployed in the Kharkiv region. As Ukrainian forces have pushed back the Russians, a big number of war crimes has been revealed in liberated areas, including in Izyum.

It is not known how many of Popov’s fellow servicemen have been killed in the fighting. But according to various sources, losses have been significant.

In the course of the war, a big number of men from Popov’s 200th Motorized Rifle Brigade has been killed. According to Ukrainian sources, “several hundred men” were killed already in the first days of the attacks on Kharkiv. Among them were head commander of the Brigade, Colonel Denis Kurilo.

Estimates from the Ukrainian Armed Forces say that a total of more than 93,000 Russian warriors by mid-December had lost their lives on the battlefields.

Some of the killed men are included in lists compiled by the Barents Observer.

Following his fighting in Ukraine, Popov was given the rank of major, and he now serves as deputy head commander of a rifle battalion under the 200th Motorized Infantry Brigade. In August, he was given the award Hero of Russia, as well as a Golden Star medal for special achievements. He has also gotten the Suvorov and Zhukov medals.

The warrior continues to take part in the bloody onslaught on Ukraine, and in a video greeting shared on state-controlled social media thanks his parents, teachers and friends for reading him “the history of heroes of the Great Fatherland’s War.”

“The naming of the school is for me a great honor and big responsibility. I promise to honestly and faithfully serve our motherland,” he says in the recorded message.