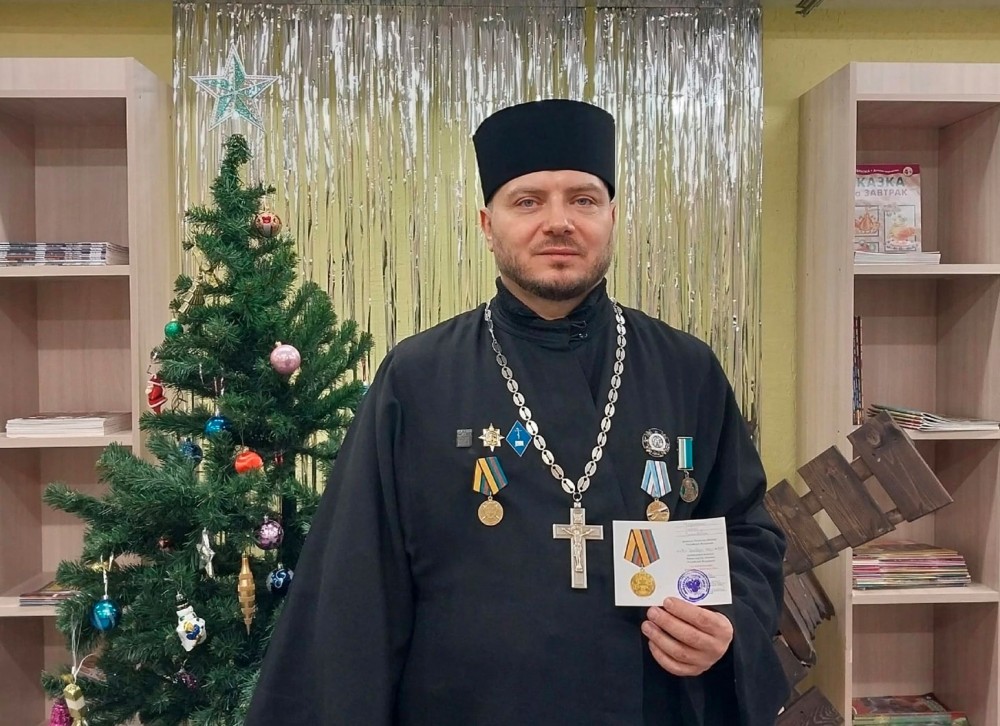 Ahead of his departure to Ukraine, Father Sergii was awarded a medal from the Ministry of Defense. Photo: the church in Sputnik

The militant clergyman known for his kickboxing skills and hardline Orthodoxy brings his cross and military gear to fight Ukrainans in Donbas.
Read in Russian | Читать по-русски
By

Four months after he was appointed spiritual leader of the small congregation in Sputnik, Father Sergii (Cherchenko) is packing up and leaving the Kola Peninsula.

“Our archpriest is going on a mission,” the local church says in a post published on social media VK.

“We wish that he will return alive and unhurt, so that the life of the congregation can continue!” the churchgoers say.

Ahead of his departure, prayers were held in the small local church building. Archpriest Sergii is leaving together with Lyubava Demeshchenko, a female representative of the brigade, and a group of naval infantry fighters.

“We pray for their execution of military assignments for the protection of the Russian World,” the local church says.

Sputnik houses the Northern Fleet’s 61st Naval Infantry Brigade. It is located only few kilometres from the border to Norway and Finland and is known for its well-trained marines. In the war in Ukraine, the brigade has had big losses and is now believed to be significantly weakened.

During his short service in the base, Father Sergii (Cherchenko) is said to have made big efforts in vitalising local church life, and the tiny church building in the base has gotten a major renovation.

Ahead of his deployment to the front, the archpriest was awarded a medal for his efforts to “strengthen the battle brotherhood.”

A letter signed by Minister of Defence Sergei Shoigu and the leader of the Northern Fleet’s staff department, praises the archpriest’s “great personal contribution to strengthen fighter comradeship and military cooperation.”

“We are serving Russia,” Father Sergii says in a comment to the award.

The prelate that previously served in Teriberka and Severomorsk has also actively engaged in propagating patriotism among local servicemen.

According to Sergii, Russia’s stand-off with the West is all about values.

“A unique feature about church service on the northern boundaries of Russia is an emphasis on the strengthening of a spiritual forward position on the border to Europe in a strategically important neighbourhood to NATO,” he recently wrote in a social media comment .

“Spirituality gives birth to an attentive soul that gives a significant advantage in mind and meaning over the enemy,” he added.

The local archpriest is also known for his passion for kickboxing and has travelled across Russia with a group of young kickboxers to participate in competitions.

In a VK post, he describes how he previously got complaints from people that reacted to his mixing of kickboxing activities and church service. But now, the same people take contact to ask how to avoid military service, he says.

The archpriest appears to show little mercy for these people.

“I am not ready to interact with deserters and traders of the Motherland. God will be the Judge of these poor bastards that have to carry such a heavy cross and pitiful burden to Hell,” he writes.

“The time has run out for words, council and preparation! The time has come for action and silent execution of orders!” he underlines.