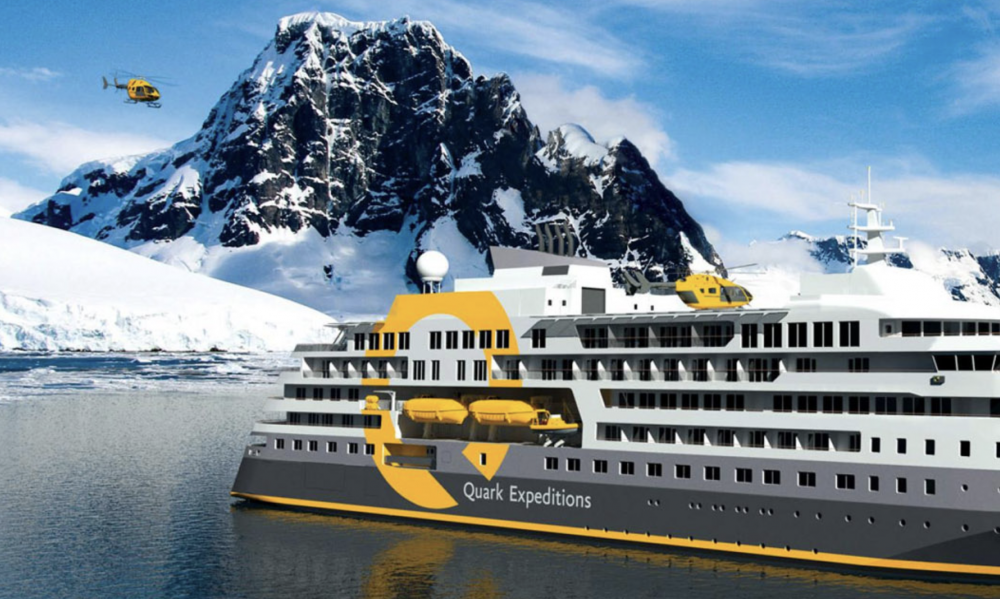 "Ultramarine" is one of the new expedition cruise ships bringing helicopters on Arctic voyages. Illustration: Milestone

Cruise ships offering passengers to explore above and beyond what was previously imaginable are coming to the Arctic for the 2022 season. Svalbard, however, says no to submarine- and helicopter excursions.
Read in Russian | Читать по-русски
By

As travel itineraries are starting to pop up among cruise operators making ready for a post-pandemic expedition comeback in 2022, some of the newest ships offer adventures that would have been considered science-fiction only a few years back.

“Scenic Eclipse” as an example, is planning a 24-days cruise from Amsterdam to Svalbard. All-inclusive gets a somewhat new meaning when the 228 passengers don’t only have an exceptional choice of 10 dining experiences onboard, and private verandahs with jacuzzi in their suites. It is the adventure activities outside the vessel that goes beyond anything ever seen in polar tourism.

The ship is equipped with a submarine with six seats permitting passengers to explore the underwater Arctic world.

How cool wouldn’t it be to dive down vertical beside an ice flow together with a group of beluga whales in one of the fjords at the Svalbard archipelago? Guess who would be the selfie-star on Instagram or become the hero when showing vacation photos to grandchildren during Christmas party at some Manhattan penthouse.

Don’t like the underwater world? Don’t worry, the “Scenic Eclipse” is also equipped with a helicopter. Excursion could range from flying over glaciers, to even make landings on the ice or a mountain peak.

But despite being the most popular Arctic destination for expedition cruise ships, nothing like this will happen at the Norwegian archipelago in the Arctic.

Not allowed at Svalbard

In an email sent to the Governor of Svalbard, Scenic Cruises asks for permission to conduct diving operations while cruising at Svalbard. The Barents Observer has obtained copies of the communication between the cruise operator and Norway’s highest-ranking representative on the archipelago. Scenic attached a list of potential diving spots, from where the submarine and its chasing boat would operate.

“The submarine has the capacity to dive to a depth of 300m. As explained in the attached document the submarine and its chasing boat are deployed on the spot identified for carrying out the diving operation and the submarine will then operate vertical dives with very limited horizontal moves,” the Scenic Cruises representative writes.

In a prompt reply, the Governor of Svalbard’s legal adviser rejects the application, pointing to a lack of sufficient knowledge on which effects submarine excursions will have on the Svalbard wildlife.

“The Governor will not allow submarines on Svalbard,” the email ends.

Another brand-new luxury ship sailing Svalbard next spring is the “Ultramarine”, operated by Quark Expeditions.

With suites for 199 guests and a crew of 140, the vessel features a helipad on top with space for two twin-engine helicopters. Those two helicopters, however, can’t be used at Svalbard.

“Sightseeing flights with aircraft, including helicopters, is not allowed inside territorial waters or overland at the archipelago,” says Governor Lars Fause to the Barents Observer in a phone interview from Longyearbyen.

Flightseeing is listed among the activities offered while sailing “Ultramarine”, but not for the specific 2022 Svalbard voyages. The ship will sail several tours starting out of Longyearbyen as early as May 3. In late June, “Ultramarine” leaves Svalbard for itineraries at Greenland, followed by the Northwest Passage and Arctic Canada until mid-September.

Greenland has other rules than Arctic Norway when it comes to flying helicopters with tourists.

Quark Expeditions describes its “Ultramarine” as “our game-changing polar ship.”

The cruise operator states that the two twin-engine helicopters can “take you to areas other can’t reach. Ascend cascading coastal glaciers and step onto the vast polar plateau of the Greenland Ice Sheet. Travel by helicopter to glacial lakes high in the upper alpine zones.”

Executive Director Frigg Jørgensen with the Association of Arctic Expedition Cruise Operators (AECO) says that although the number is still quite low, the total amount of vessels with helicopters will increase.

“Helicopters serve a number of purposes in marine operations and expeditions cruising, including transport, logistics, reconnaissance, and preparedness. In some areas, a few operators also use helicopters as part of their offering to guests, such as transport to visit sites and sightseeing,” Frigg Jørgensen explains.

She says the AECO does not have dedicated guidelines for helicopter activities.

“On a general basis, all expedition cruise activities that our members carry out in the Arctic should be in compliance with AECO’s guidelines, which are built on the principle of showing the utmost consideration for the vulnerable, natural environment, local cultures and cultural remains, as well as the challenging safety hazards at sea and on land,” Jørgensen makes clear.

“Regulations in Svalbard are very restrictive when it comes to helicopter operations. AECO has not received any signals that these regulations will be eased, or exemptions will be granted,” Frigg Jørgensen elaborates.

“It is AECO’s understanding that as the situation currently stands, helicopter use for tourism purposes would not be permitted in Svalbard. AECO does not have any information about whether AECO members seek to apply for exemptions.”

Today, helicopter operations at Svalbard are carried out by the Governor’s office from Longyearbyen airport and by the Russian state-owned mining company Trust Arcticugol (Arctic Coal) from its heliport at Kap Heer near Barentsburg.

As it is Norwegian aviation law that applies to Svalbard, the Russian Mi-8 helicopter is for the most only given permission to operate on flights in connection with mining activities. Like bringing workers from the airport in Longyearbyen to Barentsburg.

Trust Arcticugol, however, is looking for ways to expand business as coal mining becomes less important. In 2008, the company said it would like to obtain general permission to fly tourists and scientists. Norwegian aviation authorities turned down the application, newspaper Aftenposten reported at the time.

The Russian company appealed the decision, arguing it was not in line with the Svalbard Treaty. The 1920 treaty, signed by Russia, grants equal rights to conduct maritime, industry, mining and trade activities for signature parties as long a regulations and laws are followed.

The Norwegian Ministry of Transportation declined the appeal.

In recent years, however, permissions have a few times been granted to fly scientists on missions with helicopters.

A challenge for Norwegian authorities in the future could be to draw the line between science and expedition tourism.

See photos of the submarine at the portal of Scenic Cruises.