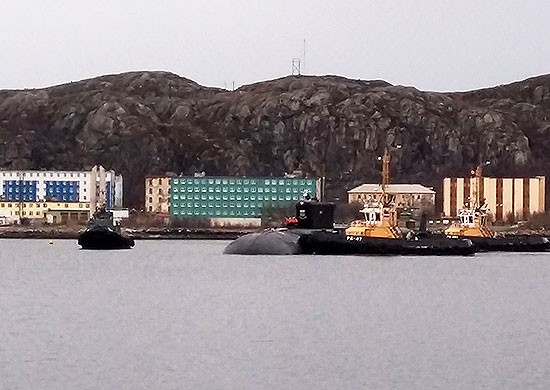 “Yury Dolgoruky” made port-call to Gadzhievo after longest lasting voyage a Borei-class submarine ever has sailed.

Two months at sea, including under the Arctic ice cap where the submarine could hide from being detected.

«The crew of «Yury Dolgoruky» has once again confirmed that the Russian navy currently has the most modern nuclear missile carrier, able to perform the tasks of strategic deterrence in the oceans including under the Arctic ice,» said Admiral Vladimir Korolov, Commander of the Northern fleet as the submarine arrived at port in Gadzhievo on the Kola Peninsula.

It is Russia’s Defence Ministry that reports about the submarine’s Arctic Ocean voyage that started in mid-August.

«Yury Dolgoruky» carries up to 16 Bulava-missiles, each holding six to ten nuclear warheads. The submarine was the first new strategic submarine to join the Russian navy since 1992 when she entered service on January 10th 2013.

The armed Bulava missiles were, however, not loaded to the silos onboard before last summer.

Russia has three Borei-class submarines on duty and another three under construction. Yet another two of the class are planned, bringing the total number to eight sometime around 2020.