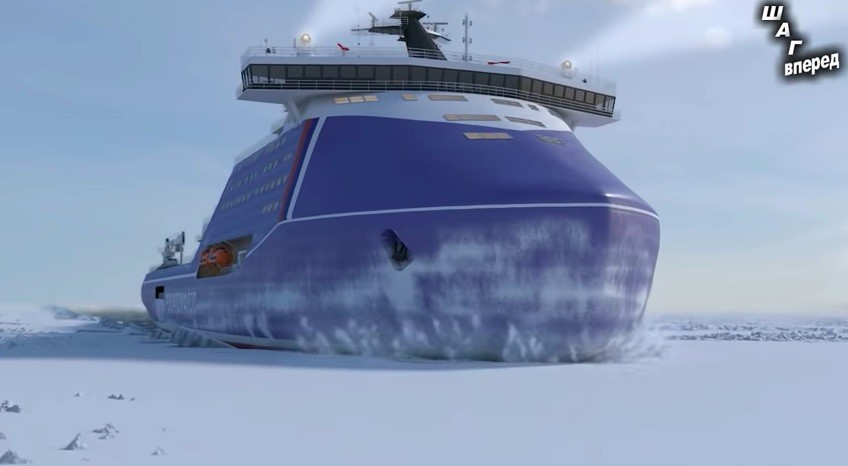 The "Lider". Screenshot from project presentation

Yards fight for the right to build the nuclear-powered vessel that will be able to break through 4 meter ice and open wide shipping lanes across Arctic waters. But the biggest resource developers in the region might not really want it.
By

The 120 MW icebreaker «Lider» is not only super-powerful, but also super-expensive, and questions have been raised about Russia’s ability to cover the bill.

However, the country’s authorities continue to assure that the vessel will be built.

Several yards are now competing over the right to build the ship. On the one hand is the Baltic Yard in St.Petersburg, which might ultimately join efforts with the nearby Severnaya Yard. On the other hand is the Zvezda, the new yard under construction near Vladivostok, newspaper Kommersant reports.

A decision is expected soon. Russian nuclear power company Rosatom earlier this year confirmed that an investment decision will be taken late 2018 or early 2019.

«This unique icebreaker - which is without analogues in the world - will allow us to develop northern fields at a speed which meets the objectives of natural resource developers like Novatek», Rosatom leader Aleksey Likhachev told President Vladimir Putin in a meeting in the Kremlin.

The 209 meter long and 47 meter wide vessel, designed by company Iceberg, has a draft of 13 meter and will be able to break through four meter thick ice at 12 knots speed. It will be powered by two RITM-400 reactors with a total 120 MW capacity.  It has unlimited range and can operated round-the-year, Rosatom informs in a presentation of the vessel.

The ship is needed for Russia to strengthen its presence in the global markets of liquified natural gas, as well as to provide for Arctic expedition, Vyacheslav Ruksha, leader of Rosatomflot told RIA Novosti. The powerful head of the company that manages the country’s fleet of nuclear-powered icebreakers maintains that the «Lider» will enable Russia to open a «direct access» to the Asian-Pacific countries.

Ruksha says two, perhaps even three, of the vessels will be built.

However, the leading natural resource developers in the Russian Arctic might actually not want the new super-powerful ships. Instead, they intend to build their own fleets of icebreakers.

Recently, Novatek announced that it is establishing its own shipping company, which ultimately will operate shipments to and from the company’s LNG plants in the Arctic. The company has also signalled that it wants it own fleet of icebreakers, possibly fuelled by LNG.

Novatek today accounts for the biggest volumes shipped out of the Russian Arctic. A growing number of top-class ice-class tankers is today shuttling to and from Sabetta, the terminal serving the Yamal LNG project, and more will come when the company in few years opens its second LNG project, the Arctic LNG 2.

Also Gazprom Neft is signalling that it prefers to go its own ways, without the involvement of Rosatom. The company recently presented the «Aleksandr Sannikov», a powerful 121 meter long icebreaker capable of breaking through two meter thick ice. It will assist tankers shuttling to and from the company’s Arctic Gate oil terminal in the Gulf of Ob, the company says.

In a recent interview with RIA Novosti, Gazprom Neft Deputy CEO Vadim Yakovlev underlined that his company is building its own fleet of tankers and icebreakers because it wants «independence from external conditions and capacity limitations imposed by shipping companies.»

From before, another major Arctic stakeholder, the Nornickel, is independently operating its shipments of nickel ore between Dudinka in the Yenisey river and Murmansk.

With their bids for independent shipments, the companies challenge the growing power of Rosatom in the Arctic. The state nuclear power company has got the Kremlin’s blessing for a leading role in the development of the Northern Sea Route, and plans are ambitious.

According to Rosatom leader Likhachov traffic on the Northern Sea Route will multiply in only few years. By 2030, at least 70 million tons of goods per year will be shipped in the eastern direction towards the East Asian markets.

However, Rosatom is dependent on the natural resource developers that are generating the growing volumes of goods that are shipped across the region.