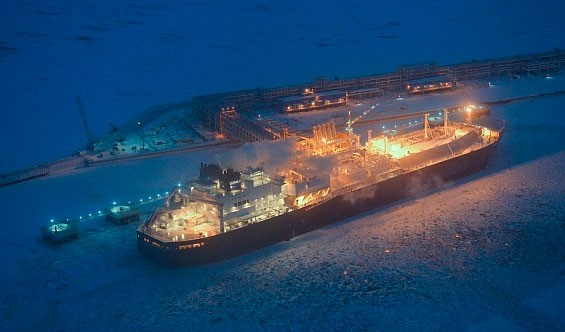 Russia’s next major liquified natural gas project is likely to be served by a fleet of domestically built vessels sailing under Russian flag.
Read in Russian | Читать по-русски
By

According to CEO Leonid Mikhelson, the new unit will help enhance efficiency related to costs and fleet management, the company informs.

«The long-term strategy of Novatek includes the growth in LNG production in the Arctic region to at least 55 million tons per year [and] therefore the organization of efficient models for shipping on the Northern Sea Route is one of our priorities.»

«The establishment of our own transport company fully corresponds with our goals and allows us to […] enhance competitiveness of Novatek’s Arctic projects.»

The decision to create a new company comes as Russian authorities are taking measures to nationalize shipping along the Northern Sea Route.

In mid-November 2017, President Putin announced that all shipments of oil and natural gas along the Northern Sea Route would be nationalised, and a bill from the State Duma followed few weeks later.

Then, in March 2018, the Ministry of Industry and Trade elaborated a bill, which says that only Russian-built vessels will be allowed to ship to and from ports on the Northern Sea Route.

Ultimately, the new legislation will allow only Russian-built vessels shipping under Russian flag to carry oil, natural gas and coal on the Northern Sea Route.

The new regime is a potential headache for the foreign shipping companies which already are engaged in the region.

Foreign companies like Teekay, Dynagas and Mitsui are all instrumental in building LNG carriers for Novatek’s Yamal LNG project. The powerful new ships are all built in Korea and carry foreign flags. Only one of the 15 Yamal LNG tankers, the «Christophe de Margerie», is owned and operated by a Russian company. However, neither this ship which is run by Sovcomflot carries a Russian flag.

Novatek’s new shipping company is likely to be established in connection with the development of the Arctic LNG-2, the projected new natural gas project in the region. The Arctic LNG-2 is planned to produce up to 20 million tons of LNG per year and will require an additional big number of tankers.

By developing its own fleet, Novatek is moving in the same direction as mining and metallurgy company Norilsk Nickel. In the 2000s, Norilsk Nickel built up its own fleet of ships, thus allowing for independence from other shipping providers. Norilsk Nickel today has a fleet of five ice-class Arc7 container vessels which shuttle between Dudinka and Murmansk.