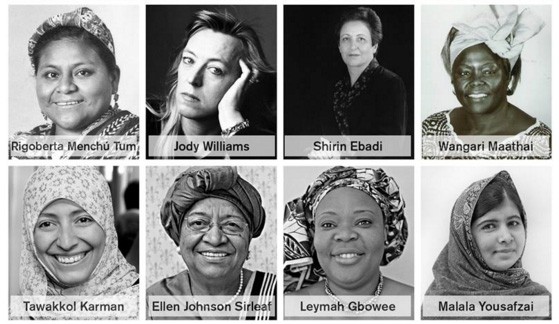 Five of these Nobel Peace Prize winners are behind the letter on Arctic oil drilling. Photo: nobelpeacecenter.org

Six female prize winners point a warning finger against Norway; oil exploration in the Arctic must stop.
By

In a letter, the Nobel laureates urge the Arctic countries to put a stop to drilling in the pristine region.

“We urge you to seize this moment, to set a high standard for multilateral climate leadership, to protect the Arctic Ocean from the dangers of fossil fuel extraction, and to lead as the world builds the safe, clean, and renewable energy future we need,” the letter reads.

The address is sent as leaders of Arctic nations assemble in an Arctic Council’s senior officials meeting in Fairbanks, Alaska. It is the Nobel Women’s Initiative which is behind the letter.

“The Arctic Council has the opportunity to serve as a model of the international cooperation that will be needed as we collectively phase out fossil fuels and transition the world to cleaner, more sustainable sources of energy,” the Nobel Laureates write.

With the address, the peace prize winners kick the leg of Norway, the country responsible for the prize. Despite its mounting climate commitments, Norway continues to explore Arctic waters and  the country’s government has no plans to reduce its drilling program.

Norway’s upcoming 23rd Licensing Round include blocks located further east and further north than ever before on the Norwegian shelf. And the recently announced Awards in Predefined Areas (APA) offers 24 new Arctic blocks to companies. In mid-March, the country’s firs offshore oil platform, the «Goliat», started production.

At the same time, other Arctic countries appear to be putting on the breaks. In the USA, the Department of Interior in October 2015 canceling two planned auctions of Arctic offshore oil leases in the Chukchi and Beaufort seas, and turned down requests from oil companies for more time on existing leases.

In a meeting last week, President Barack Obama and Canadian Prime Minister Justin Trudeau announced a joint plan to cut methane emissions from the oil and gas industry and a suite of plans to protect the environment in the Arctic.