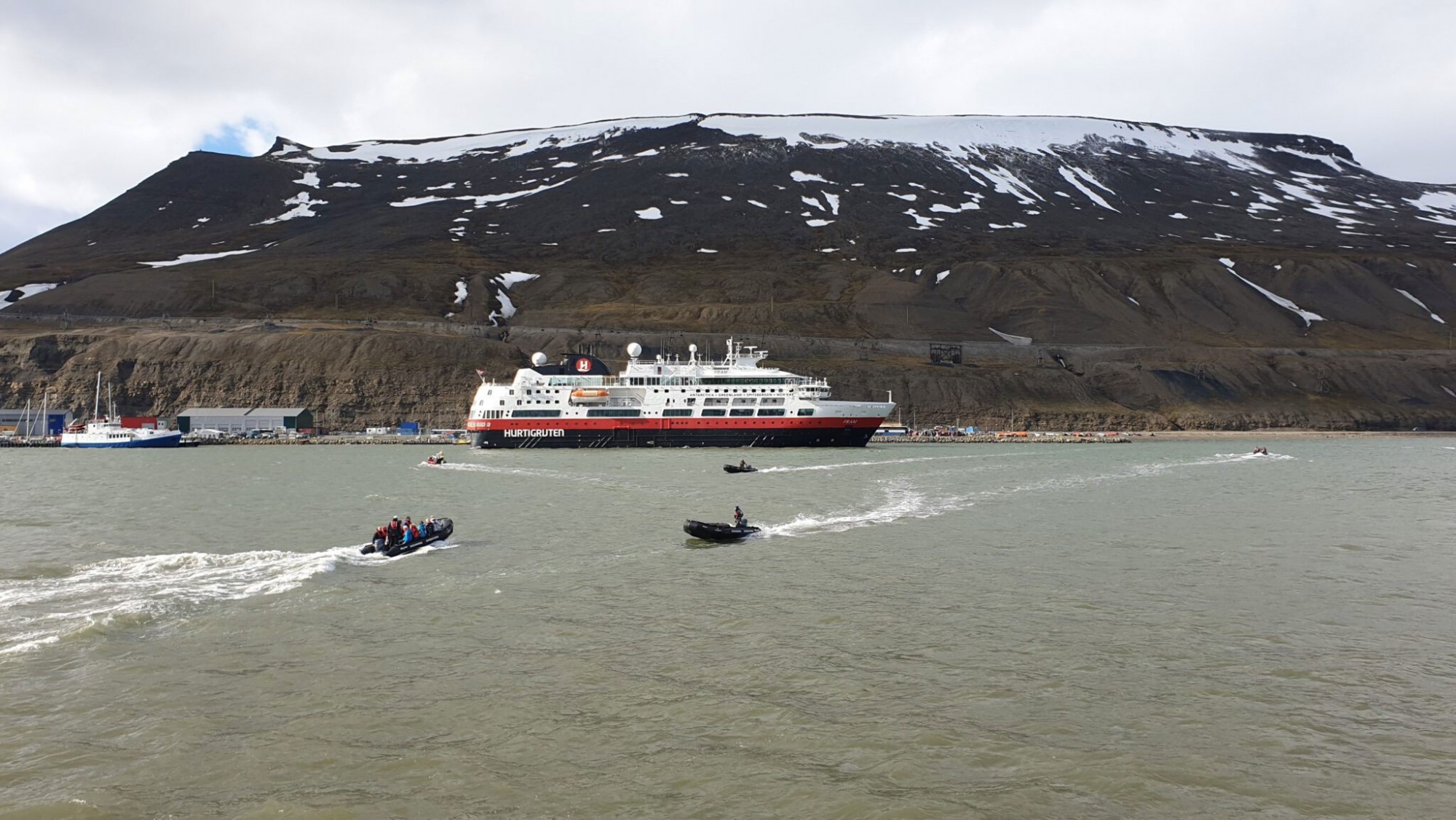 The Arctic is the fastest-warming region on Earth: ice is melting faster than ever, exposing land that is ripe for colonisation and occupation by both native and invading species. But it is not only flora and fauna that are traveling north: so are we. Homo sapiens, the greatest invader of them all.
Read in English

Global biodiversity is under attack, especially from alien species, climate change, and changes in land use. And where these threats converge – as they do in the Arctic – the consequences for local ecosystems will be hardest felt. Human activity in the polar regions is at record levels, with over 45 000 people visiting Antarctica in 2017/18, and tourism is now a pillar for local economies in remote Arctic communities such as Longyearbyen in Svalbard and settlements across Greenland.

Svalbard, in particular, has seen an unprecedented rise in tourism, with over 73 000 guest arrivals in 2018. That is 30 000 more tourists to one island in the Arctic than visited the whole of the Antarctic continent during the same year.

In 2018, the largest proportion of these guests arrived on cruise ships, accounting for 46 000 individuals. Meanwhile, 81 000 people had arrived at Longyearbyen airport by the end of September 2019. And there is no sign of these numbers slowing, with investment in the town geared to tourists, and an ever-increasing fleet of expedition cruise ships and companies.

Whilst many of us visiting these remote places take care to ensure we “leave no trace”, we do not account for what we unwittingly transport. An examination of the footwear of 259 air travelers coming through Longyearbyen airport found an average of 3.9 seeds on each person.

This amounts to 270 000 seeds imported into Svalbard every year, a quarter of which are able to germinate under conditions found in Svalbard. In Barentsburg, the paths walked by visitors each summer are flanked by weeds scattered by humans. In a landscape that is otherwise stark and barren, the verges of paths are verdant green.

Although the Svalbard Environmental Act prohibits the intentional introduction of alien species to the region, there is currently little regulation on the imports of plants and fodder into Svalbard. This, in addition to increasing human activities, heightens the risk of unintentional introductions and is now cause for growing concern amongst decision-makers. Ornamental plants are imported to Longyearbyen’s grocery store for local residents, yet whilst the plants themselves could not survive life outside of someone’s living room, hitchhikers on them may be able to.

A survey of imported pot plants that were outside the only supermarket in Svalbard during summer 2018, when temperatures are above freezing, found the green-peach aphid Myzus persicae to be happily occupying three different ornamental plants. This aphid is a known pest species, with cold-tolerance physiology that may just allow it to colonise the area. Whether or not it has managed to do so remains to be seen.

Imports to Svalbard have occurred now for decades, most notably, to the settlements of Barentsburg and Pyramiden which have previously held significant communities of 1000 people each. Both towns were deliberately planted with imported grasses to “green” the communal areas and make residents feel more at home. Though the people may have left over the years, non-native plants like Deschampsia cespitosa still remain. Not only did the communities import plants for decoration, but they also imported farm animals to support the human population.

The animals themselves were kept in stables, but their dung, bedding, and waste fodder were all thrown outside, creating mounds of fertile soils that also contained seeds. Now, you can find some of the most diverse and lush vegetation in all of Svalbard in and around these old farms. There, Barbarea vulgaris, winter cress, reach over a metre in height, flowers, and reproduces. Taraxacum officinale, the common dandelion, is so abundant in places that there are too many plants to count and the landscape is yellow with flowers in summer. In the main town of Longyearbyen, a similar planting scheme in the past is why lawns of Festuca rubra can now be found lining some roads.

Whilst these farms are now abandoned and the pigs and cows long gone, the problem of animal husbandry on Svalbard has not gone away. With the rise in tourism has come a rise in dog yards. Year-round dog sledding through the beautiful valleys in and around Adventdalen, near Longyearbyen, has become the main activity choice for visitors to the area. A new dog yard has now been established in Barentsburg, and another is likely in Pyramiden in the future. In 2019, approximately 500 dogs are owned by the four main sledding companies, and as many as 20 new puppies are born in the larger dog yards each year. The dogs, like the farm animals, fertilise the adjacent ground and unusually green vegetation surrounds the kennels as a consequence. Like the old farms, dog yards use hay and straw rich in seeds to bed the animals through the cold.

Recent surveys of invasive plant species in the Longyearbyen and Adventdalen area found strong correlations between animal husbandry and alien plant species. We do not yet know what invertebrates or microbes may be imported too, but for now, the impact of plants and nutrients alone is evident. Alien species, both plants, and animals tend to outcompete native species for everything from space to nutrients and even sunlight. Invasions are one of the biggest threats to global biodiversity, after all, and now Svalbard must learn this lesson, just like the rest of the world.

As climate change makes the harsh winters and cool summers of the Arctic increasingly favorable to any hitchhiking species, as the retreat of ice opens up more soils for colonisation, and as human activities fertilise the barren ground, we can no longer turn a blind eye to the issue of alien species in even the most inhospitable areas of our planet.

If we are to maintain the Arctic as a place that is world-renowned for its unique ecology and landscapes, then actions must be taken to protect it. Whilst long-term societal changes are needed to turn the tide of climate change, political decisions that will increase biosecurity and personal responsibility in Svalbard can be taken with comparative ease and rapidity.

If you choose to travel north, check your own clothes and equipment for seeds and stowaways, and visit www.stoparcticaliens.com for more information on what you can do to ensure that your footprints are just that.

Visiting the polar regions can be a life-changing experience, and teach visitors a lot about the planet, the environment, and why it is worth protecting. But remember that in a world where we cannot survive without significant protection from the elements, we are aliens too, and where we go, other aliens tend to follow…