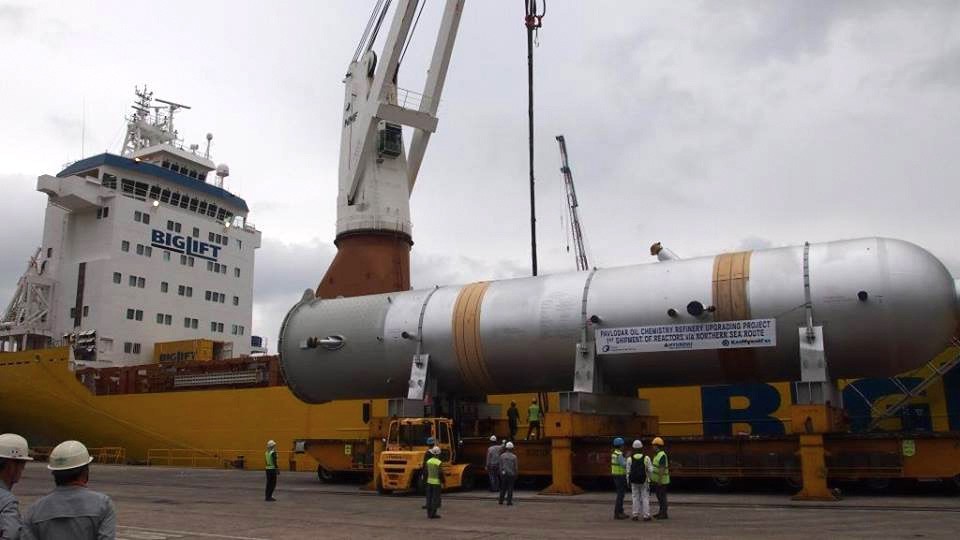 From South Korea to Kazakhstan via Northern Sea Route.

The Dutch ship «Happy Dover» on 17th July set out from the South Korean port complex of the Hyundai Heavy Industries on a unique mission. On board are two chemical reactors made for the Pavlodar oil refinery in Kazakhstan, a plant located on the Irtysh River.

The «Happy Dover» will ship northwards to the Bering Strait and from there eastwards along the Northern Sea Route. It is expected to arrive in Sabetta, Russia’s new Arctic port on the Yamal Peninsula, on 15th August.

In Sabetta, the two 600 ton reactors will be reloaded onto barges operated by the Irtysh Shipping Company and the voyage will subsequently proceed through the Gulf of Ob and up the Ob river and the and Irtysh river.

The shipload is expected to arrive in Pavlodar on 25 August, the Russian Trade Representative Office in South Korea informs on its Facebook page.

It is the first ever shipping operation of the kind.

«If all proceeds positively, Korean shipping companies will start using the Northern Sea Route on a regular basis», the Trade Office argues.

The chemical reactors are produced by the Hyundai Heavy Industries on an order from the Global Engineering Technology company and it is the SLK KUKBO which has organized logistics.

The shipping operation is historic also for the port of Sabetta. According to Vyacheslav Goloskokov, Head of the Ural Customs Authority, it shows that the new Arctic port can be used for a wide range of purposes and that the Ural region consequently has got a new sea gate.

«This is a unique operation, which I hope will succeed and thus open a completely new page in the history of Ural logistics»,  Goloskokov says to TASS.

According to the customs official, there is also another second similar shipping operation in the planning. Key construction components for company SIBUR’s new major petrochemical plant in Tobolsk will be shipped to Sabetta and from there taken up the rivers Ob and Irtysh.