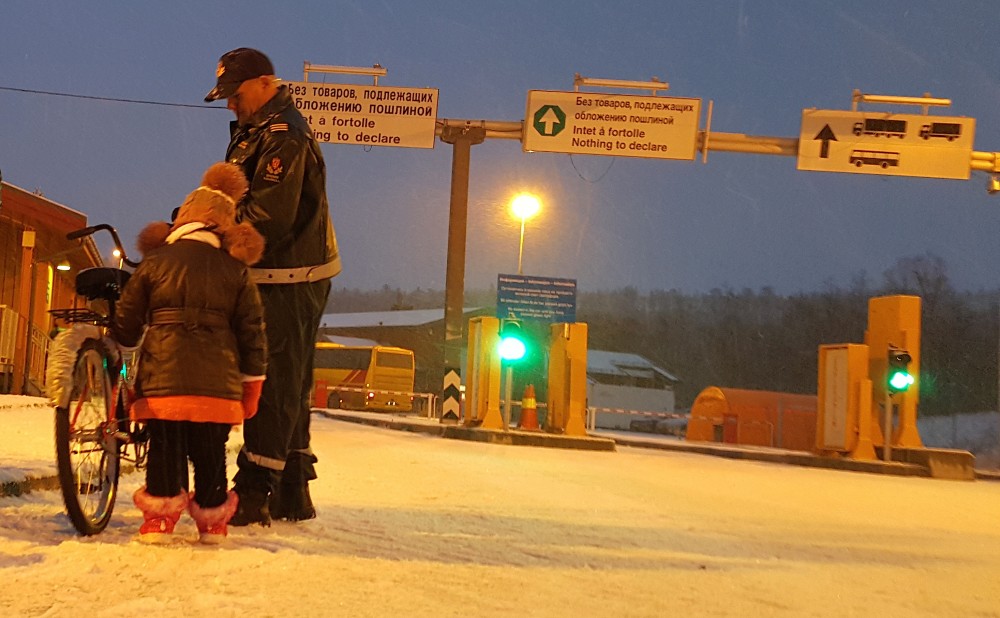 Nobody is allowed to walk over the Russian-Norwegian border. This girl came together with her parents and got help to handle the bike by one of the Norwegian immigration officers at Storskog check-point. Photo: Thomas Nilsen

Norway allocates extra funding to send 23 new police officers to handle the extraordinary situation on the border to Russia.

Thursday, a peak record of 147 asylum seekers cycled in the snow across the border from Russia to Storskog check-point where Norwegian  police officers registered their IDs.

For immigration officials, the current inflow of asylum seekers require more staff. Three barracks are placed near the border line, registration goes fast and efficient before the incomers are taken to a reception centre in Kirkenes.

Funding is earmarked for 23 new police officers to Storskog and Kirkenes to meet the challenges there, the Ministry of Justice and Public Security writes in a press-release.

“The police capacity will be significantly strengthenes with this additional funding,” says Anders Anundsen, Minister of Justice and Public Security.

Minister of Finance Siv Jensen points to the long-term economic challenges for Norway with the larger number of asylum-seekers.

“In September Norway received a larger number of asylum-seekers than in the entire first half of the year, giving rise to practical and economic challenges. With this Supplementary Proposition, the Government puts forth proposals for handling the situation in the near-term and proposes a balanced approach to financing the measures. The proposals lay the foundation for a lasting long-term policy to address the considerable flows of asylum-seekers ahead”, says Minister of Finance Siv Jensen in another press-release from the Government.

Until mid-October, the majority of asylum-seekers taking the Arctic route via Murmansk and Kirkenes to Europe came from Syria. Now, more than 20 nationalities have discovered the route. When the Independent Barents Observer visited Storskog check-point on Thursday, the majority of people crossing the border on bicycles came from Afghanistan.

The distance to bike, from the Russian check-point Borisoglebsk to the Norwegian Storskog is less than 300 metres. In snowy weather can be a challenge. That said, bicycling the last 300 metres is likely the less dificult part of a long travel.

Over the last few days, the number of migrants coming is on rise. Thursday was peak record with 147 and Friday, another 137 were counted, according to the Police in Kirkenes in charge of immigration control.