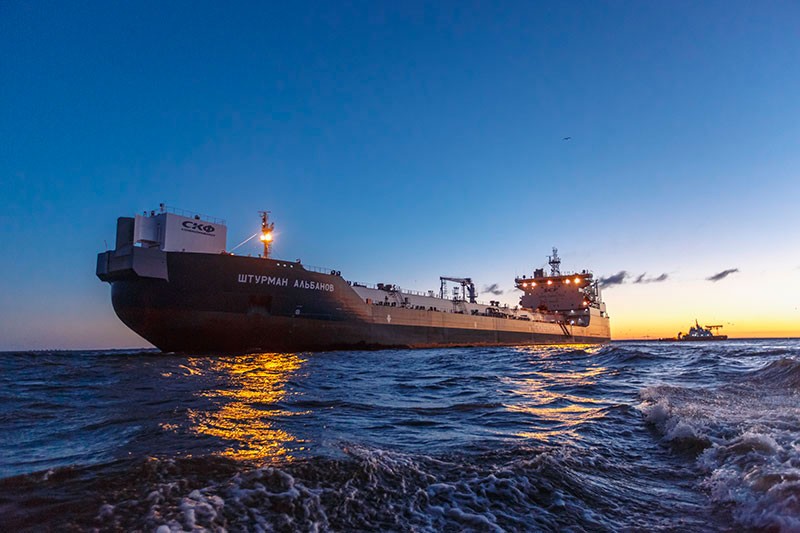 No ice on the water these days for Arctic tankers like the "Shtuman Albanov". Photo: Sovcomflot

As Russian Arctic ice shrinks to this year’s lowest, a big number of ships are moving in.
Read in Russian | Читать по-русски
By

In waters normally covered by thick ice, ships are today sailing easily and without escorts. Ice data from Russia’s Arctic and Antarctic Research Institute show that the whole Northern Sea Route now is ice-free. Even in the waters between the Kara Sea and the Bering Strait, normally a highly complex and ice-covered area, shipping appears smooth and easy.

The ice edge in the East Siberian Sea is now retreating to north of the 75th parallel and practically the whole Laptev Sea is ice-free. There is only some scattered ice around the Vilkitsky Strait, the area separating the Kara Sea and the Laptev Sea.

At the same time, the number of ships in the area is quickly on the increase.

According to the Northern Sea Route Administration, there were on 4th September 2017 a total of 94 ships in operation along the route. And that list does not include military vessels. A lion’s share of the ships are concentrated in the area around the Yamal Peninsula where companies Novatek and Gazprom Neft are developing their grand Yamal LNG and Novy Port projects.

However, there are also a number of ships in more eastern waters. Data from MarineTraffic, the shipping tracking service, show that there on 5th September were about fifty vessels in the area between the Vilkitsky Strait and the Bering Strait.

The tracking service also shows that there is hectic shipping in the northern parts of the great Siberian rivers. Several ships are moving to and from the Arctic Ocean not only on the Ob and Yenisey, but also on the Lena, Yana, Indigirka and Kolyma.

Several shipping companies, among then carriers from South Korea, have signaled interest in using the Northern Sea Route and the Siberian rivers for shipments to south Siberian and Ural sites. In the course of this summer, ten shiploads will make it to new Yamal port of Sabetta and from there on river barges for further transportation on the rivers of Ob and Irtysh.

A least 18 of the ships now shipping along the Northern Sea Route are tankers, some of which are involved in the supply of winter fuel for the many remote Arctic settlements and outposts in the area. Others are hired in connection with industrial projects.

Some might also be using the Northern Sea Route for transit shipments between Asia and Europe.

There is an increasing variety of shipments along the Russian sea route. Earlier this month, a reefer delivered 3,000 tons of frozen fish from Vladivostok to Arkhangelsk. This week, the ship «Mikhail Kutuzov» set out from Arkhangelsk with course for Shanghai with 25,000 tons of timber on board. It is the first shipment of its kind in many years, the regional Arkhangelsk administration says.

Cabotage shipments between different Russian Arctic ports has grown significantly over the last years and in 2016 totaled 7,265 million tons of goods, an increase of 35 percent from 2015.