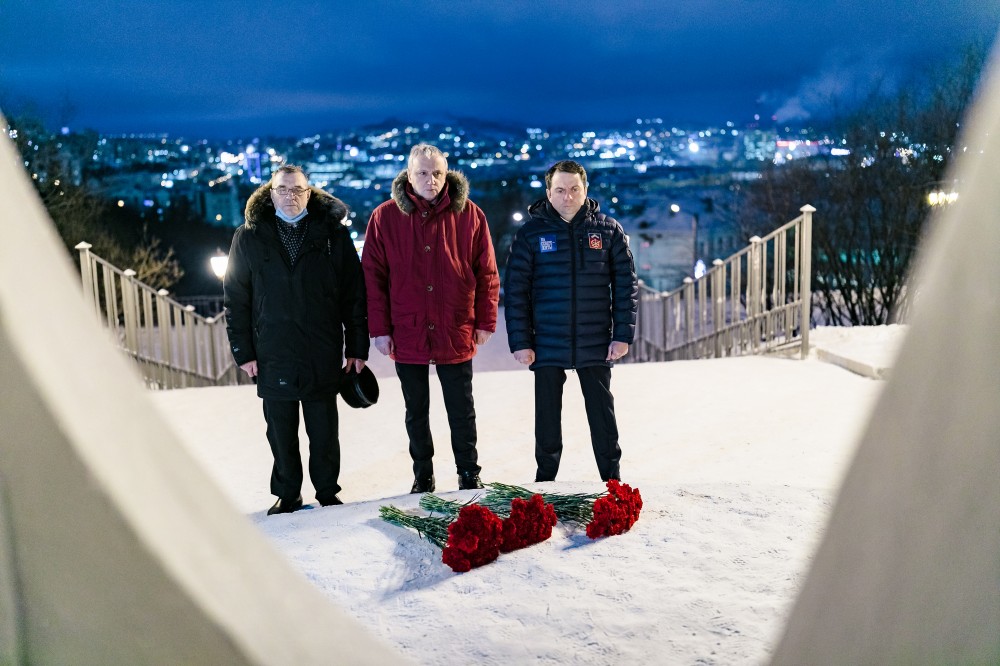 Governor Andrey Chibis (right) laid flowers at the memorial for those who lost their life at sea. Here together with Director General of the Union of Fishery Industrialists of the North, Konstantin Drevetnyak, and Chairman of the Board of the Association of Coastal Fisheries and Farms of Murman, Anatoly Evenko. Photo: Ministry of Information Policy of the Murmansk Region

The search for the missing crew from the sunken fishing vessels Onega continues, but hope has faded away to find any alive.
Read in Russian | Читать по-русски
By

Governor Chibis and President Putin both expressed their condolences to the families and friends of the dead sailors.

“The search operation has not ended yet, but the weather conditions and water temperature, unfortunately, do not leave any chances,” said Governor Andrei Chibis.

Tuesday is declared a day of mourning in the Murmansk region.

16 of the 19 crew members on Onega came from Murmansk. Only two of them were rescued.

Icing is believed to have caused the ship to capsize. Distress signal was sent Monday morning at 04:08. Four minutes later, at 04.12, the vessel was gone from the navigation systems. At the same time, Onega’s side lights were no longer observed in the water, according to the captain on the nearby fishing vessel Voikovo. The captain told regional newspaper Murmanski Vestnik that everything happened very fast.

It was Voikovo who rescued the two sailors out of the freezing cold waves about 40 kilometers from the southwestern shores of Novaya Zemlya in the Russian Arctic.

The temperature in the area at the time of sinking was -20° C, waves were up to four meters and the wind was up to 25 meters per second.

The Government of the Murmansk region will provide financial assistance to the families of the sailors who are missing. Each family will receive one million rubles, the government informs.

The Russian flag was lowered throughout the Murmansk region on Tuesday and TV and radio companies, as well as cultural institutions, were advised to cancel entertainment events and programs.

This is the second time in less than ten years that Murmansk enters Orthodox Christmas while mourning victims of accidents at sea. On December 18, 2011, the oil drilling rig Kolskaya capsized and sank in the Sea of Okhotsk while under tow during a fierce storm. 53 of the crew died, of which about half came from Murmansk.

Last summer, 41 of 78 passengers on an Aeroflot flight from Moscow to Murmansk were killed in the ensuing fire after the plane made a hard emergency landing at the Sheremetyevo airport. In July the same year, 14 submariners lost their lives in a fire on board the top-secret military Losharik sub off the coast of the Kola Peninsula. In August 2000, all 118 crew members on Kursk were killed when the torpedo compartment exploded and the submarine sank in the Barents Sea.