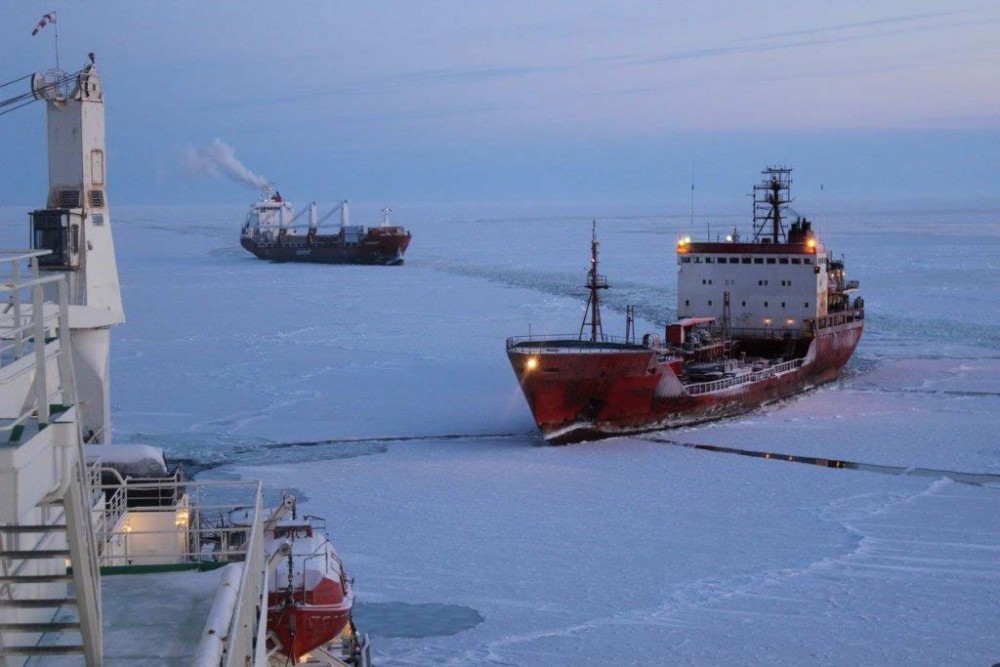 Big growth is followed by scandal for military Arctic shipper

As new bases have been built across the Arctic, operations have quickly expanded for military logistics company Oboronlogistika. In December, one of its biggest ships wrecked in thick sea-ice after it violated shipping regulations.
Read in Russian | Читать по-русски
By

The Sparta-3 on Tuesday this week sailed into the Kola Bay with course of Murmansk after an exhausting Arctic voyage. On board was a crew that for weeks had fought with thick ice and extreme cold.

The dramatic voyage has brought infamy to Oboronlogistika, the shipping company owned by the Russian Ministry of Defense.

The 142 meter long Sparta-3 in late November set out from Arkhangelsk towards Dudinka, the port on the Yenisey River. On its return voyage it got stuck in the Yenisey Bay. Despite assistance from icebreaking support ship Kigoriak, the Sparta 3 remained ice-locked in the area for two weeks.

It soon turned out that the cargo ship had sailed into the Yenisey without necessary permission from the Russian Northern Sea Route Administration. Leader of Atomflot, the base of Russia’s nuclear-powered icebreakers, made clear that it was irresponsible by Oboronlogistika to send the ship into the thick sea-ice.

“The shipowner was made aware about the risks connected with anticipated aid from nuclear icebreakers engaged in contracted operations. Never the less, the Sparta-3 set course for the port of Dudinka without permission,” Mustafa Kashka said.

Rosatom still sent nuclear-powered icebreaker Vaygach to the rescue, and on 27th December the Sparta-3 was broken loose from the ice, the Federal Agency for Maritime and River Transport informs.

That same nuclear-powered icebreaker was again sent to assist the cargo vessel on the 1st of January as it had failed to make it westwards into the Kara Sea. That same day, conventional icebreaker Admiral Makarov came to assistance and towed the ship all the way into the ice-free Barents Sea. The last part of the towing to the Kola Bay was made by rescue ship Spasatel Karev.

It was a unique towing operation through the icy Kara Sea that lasted eight days and covered a distance of 554 nautical miles, port authority Rosmorport informs. The cargo ship could not be towed by the regular way of connecting the nose part with the icebreaker. Instead, a short tow line had to be applied.

Oboronlogistika has only shortly commented on the dramatic voyage. In a statement from the 22nd of December, the military company insists that it did not sail on the Yenisey without permission. The reason for the problems was a delayed departure from Dudinka and worsened weather conditions, the company said.

It later become known that the Sparta-3 had damaged its steering system during the ice captivity and that it subsequently had been unable to independently navigate.

Oboronlogistika is owned by the Russian Ministry of Defense, has over the past years been through a major expansion.

The company was established in 2011 and is 100 percent owned by the Defense Ministry. In 2017, it was officially made united logistics operator for Arctic shipments, which means that it is responsible for delivering goods and construction materials to Russia’s military bases.

The company’s Arctic operations are headed from Arkhangelsk where a major logistics base now is being built. Included in the base will be indoor storage capacity of 31,500 square meters and outdoor space of 300,000 square meters, representatives of regional authorities in Arkhangelsk revealed in a meeting late March 2019.

According to Oboronlogistika, a total of 6,500 tons were in 2020 delivered to Novaya Zemlya and 7,300 tons to Tiksi. A major share of the goods was construction materials.

Oboronlogistika is working closely also with government clients such as the Ministry of Foreign Affairs, Rosgvardiya, Rostekh, Rosoboronexport, Roskosmos, as well as with a number of large commercial organizations.