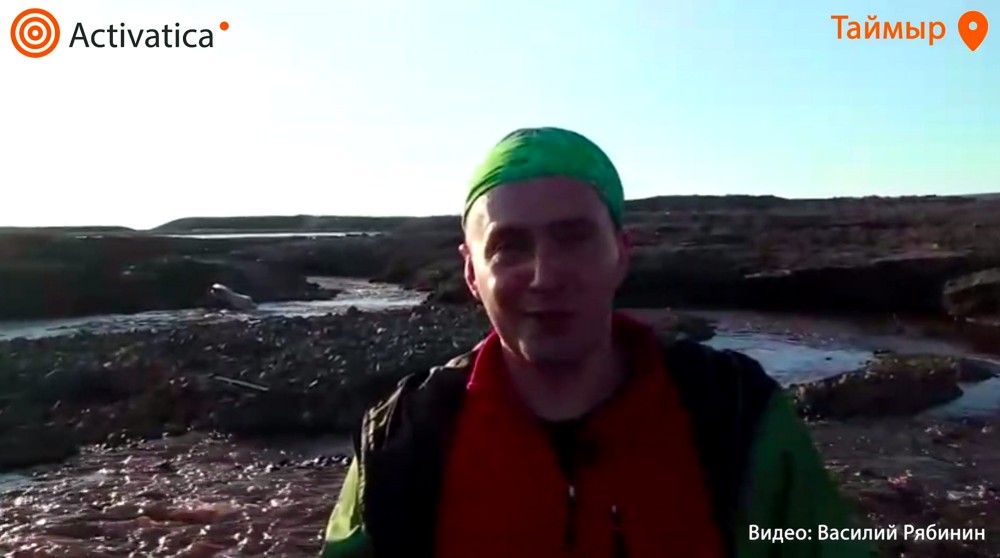 Environmentalist Vasily Ryabinin found plenty of oil in the water during a recent visit to Norilsk. Photo: Screenshot from video by Activatica

Company Nornickel claims environment on the site of its major diesel oil spill is satisfactory. Investigations by a visiting environmentalist indicate otherwise.
Read in Russian | Читать по-русски
By

“Two years have passed, there have been some clean-up operations, but these dirty red substances are still in the ground and nothing has changed,” says Vasily Ryabinin. He stands by a stream coloured red by the diesel fuel that in 2020 poured into the vulnerable Arctic nature from a collapsed oil tank reservoir.

More than 21,000 tons of fuel spilled into the tundra, streams and lakes when the tank tilted and cracked following what is believed to have been negligent maintenance from Nornickel and its subsidiary Norilsko-Taymyrsky Energy Company.

“Time flies, two years have passed, nothing has changed —red water is still running,” Ryabinin says in a video from the area.

The video is recorded only few days after Nornickel announced that the environmental situation in the area is ‘satisfactory.’ According to the company, a comprehensive study by more than 70 researchers from ten research institutes concludes that clean-up in the area has been successful and that the local ecosystem is getting restored.

According to leader of the research expedition Fyodor Romanenko, the purpose of the initiative was to get “accurate, comprehensive and reliable research information based on complex study of the current state of pollution in the water-collecting parts of the Pyasina River.”

The river was among the waterways worst affected by the spill.

“The results of the studies allow the researchers to define the state of the ecosystem of the Norilsk industrial hub and the territory of the Taymyr Peninsula as satisfactory,” Norilsk informs.

“Dear researchers, if you really want to check the true condition of the eco-system, you can simply call me and I will show you where to check,” Ryabinin says as he stands on the shore of the red-coloured stream.

Or perhaps this simply is “useful soil,” the activist adds in an ironic comment aimed at the mining and metallurgy company.

Nornickel is known world-wide for its reckless care of nature around its industrial facilities. The vulnerable Arctic environment surrounding plants in Taymyr and the Kola Peninsula have over decades been subject to serious degradation.

The spill of diesel fuel significantly added trouble to the strained environment in the area. Several hundred people were involved in the clean-up operations in summer 2020.

A big number of special containers was flown into the area and placed along the worst affected rivers and streams. Spilled oil was pumped into the containers. In addition, the company started production of storage facilities for up to 100,000 tons of polluted soil. However, flooding, bad weather and the harsh climate complicated operations.

Information about the situation was firmly controlled by the authorities and Nornickel hardly any independent environmental experts were granted permission to enter the area.

A historical fine followed. Nornickel in early 2021 had to pay a record-big sum of 146 billion rubles (€1.66 billion) for environmental damage inflicted.