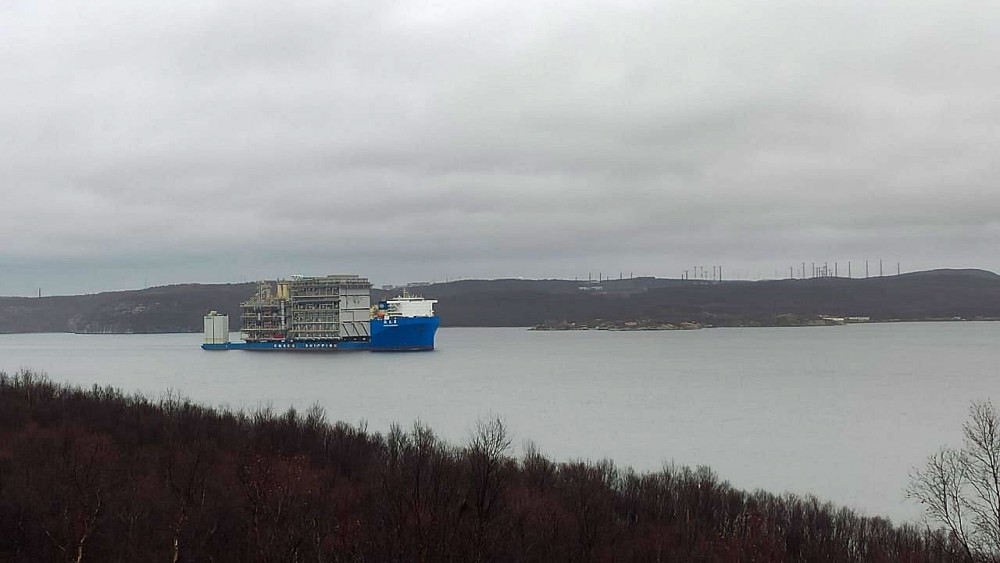 The 255 meter long "Xin Guang Hua" has delivered a key industrial module for the LNG Construction Center in Belokamenka. Chinese construction yards continue cooperation with Russia in the Arctic, a company representative underlines.
Read in Russian | Читать по-русски
By

Locals in Murmansk are used to big ships and busy shipping. But the Xin Guang Hua probably attracted people’s attention as it sailed into the Kola Bay on the 18th of October. Onboard the big ship was loaded an industrial module of the size of a major housing block.

The Xin Guang Hua is China’s biggest heavy loads vessel. And reportedly the second biggest in the world. It is owned by shipping company COSCO and has previously made several visits to the far northern Russian region.

But this time was slightly different.

Chinese yards have signalled that they are unwilling to cooperate with Novatek and its Arctic LNG 2 following Russia’s onslaught on Ukraine and the introduction of international sanctions. The decision is believed to have threatened to stall project developments.

However, Novatek has overcome the problems and the Chinese are still onboard, a local company representative says.

According to Petr Oborin, Chinese yards continue to cooperate with Novatek.

“We have worked with them and continue to work with them,” the General Director of Novatek-Murmansk said during a press tour to Belokamenka.

He admits that technological adjustments have been made in the project. “Life brings certain corrections — the production program is changed and also some of the technological solutions,” he said, according to B-port.

The LNG Construction Center in Belokamenka is key component in the Arctic LNG 2 project. It will be the world’s first facility for “mass production” of natural gas liquefaction trains on gravity-based structures.

Three gravity-based structures are under construction on site. The first is 95 percent ready, Oborin claims.

About 200 of the structure’s 500 subsystems are reportedly ready for testing and the testing phase will continue until April 2023. After that, the structure will be towed out of the Kola Bay and towards the Ob Bay and site for the Arctic LNG 2 project.

The gravity-based structures are based on 14 modules, all of them built in China. Heavy lift ships have over the past years shuttled to Belokamenka. But the deliveries of the modules came to a halt in late May, when the “Audax” sailed from China and through the Northern Sea Route to Murmansk.

The EU’s 5th sanctions package adopted by the EU Council on the 8th of May prohibits shipments to Russia of several key kinds of technology. Included in the ban are heat-exchanging units, a key component in LNG plants.

The sanctions have created serious troubles for Leonid Mikhelson and his Novatek. Key project partners Baker Hughes, Saipem and Technip have all pulled out of the project.

The Baker Hughes was to build 20 turbines of the LM9000 type to the Arctic LNG 2, seven of them to be applied in the project’s first train. However, only four of the turbines were delivered before Western sanctions hit and the American company pulled out of Russia.

Turkish companies, among them Karpowership, are likely to replace the Americans.

Novatek is facing serious difficulties also with the LNG technology.

Key parts of the gravity-based structures applied in the Arctic LNG are designed by French company Technip. Another key partner has been Saren B.V., a joint venture of Italian engineering company Saipem and Turkish company Renaissance Heavy Industries.

Both Technip and Saipem have now exited the project, and Novatek has reportedly replaced them with Nova Energies and Green Energy Solutions. The former company is a subsidiary of Russian Nipigaz, while the latter reportedly is a brand new company registered in the United Arab Emirates.