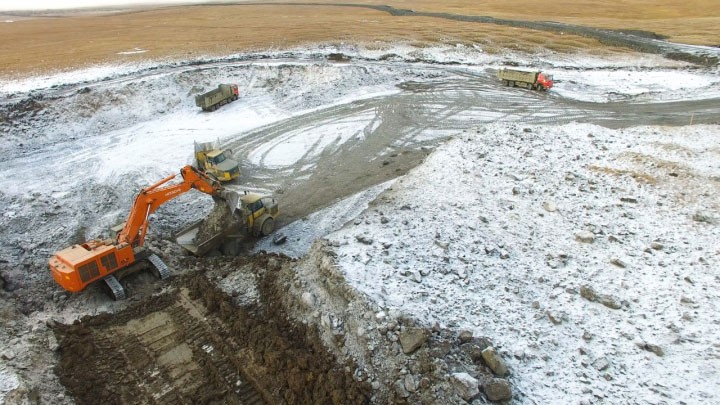 Coal diggers are building a settlement on the Taymyr tundra

It will house the workers that are to operate one of Russia's northernmost coal fields.
Read in Russian | Читать по-русски
By

Winter is on its way and workers are in full swing with the development of the Syradasaysky project on Russia’s far northern Taymyr Peninsula. In only few weeks, these desolate tundra lands will be covered in ice and snow and availability will be severely limited.

Project development has been moving ahead with high speed across the whole summer. A big number of ships have been moored along the coast of the Yenisey Bay and many thousand tons of construction materials have been put ashore.

As of 15th of October, as many as seven major cargo ships were located in the area, all of them serving Roman Trotsenko’s AEON and its project company Severnaya Zvezda.

The Syradasayskoye coal field will produce about 5 million tons per year, all of it to be exported through the Northern Sea Route.

Workers are now building the village that is to house the people engaged in project development. It will house 300 men and have all necessary facilities, including a power station, satellite connection and internet, General Director of  Severnaya Zvezda Stalbek Mishakov told Metalinfo.

Not surprisingly, the power station will be fuelled by coal. In the initial phase it will have a 10 MW capacity. Later, capacity will be extended to 12,5 MW, the Development Corporation for the Far East and Arctic informs.

The station has high environmental standards, the agency argues.

The Syradasaysky project has made a leap forward since cargo ship Yuri Arshenevsky arrived in the area in late March this year. On board were thousands of tons of machinery and construction equipment, including bulldozers, excavators, cranes, drilling equipment and housing modules.

According to the project developers, the terminal berth will be 300 meter long, which allows for the handling of 100,000 ton deadweight ships. The whole infrastructure object will ultimately cover a 20 hectare area, and also a storage facility for up to 1 million tons of coal will be built.

Sergei Shoigu has a grand masterplan for Siberia. It could move Russia towards Eurasia