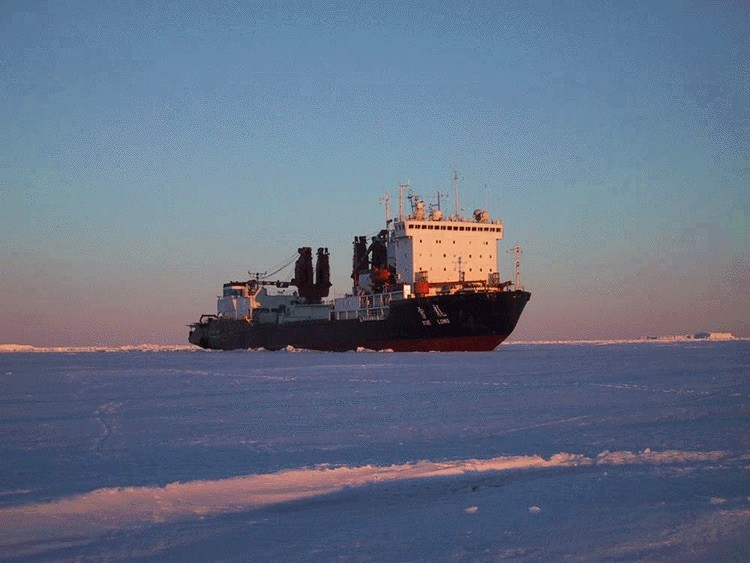 The country’s new Arctic policy document mentions the word «research» 41 times, «cooperation» 46 times and «climate» - 26 times. Meanwhile, «oil» is mentioned only six times. Russia is referred to twice, while «military» is not mentioned at all.
Read in Russian | Читать по-русски
By

The Asian superpower has for years built up capacities in the Arctic, and a regional policy document was expected.

The white paper, which is now available in English, highlights joint efforts and cooperative approaches, and at the same time underlines that China is determined to participate in Arctic governance and that it has legitimate interests and rights in the region.

The paper mentions the words «governance» and «cooperation» a total of 19 and 46 times respectively. Meanwhile, «security» is referred to 11 times. The word «military» is not mentioned at all. “Research” is mentioned 41 times, “participation” - 15 times, while “shipping” - 15 times, “peace” - ten and “indigenous” - seven times.

Environment is a key focus, and the rapidly changing Arctic climate is presented as a main challenge, as well as an opportunity.

«China’s policy goals on the Arctic are: to understand, protect, develop and participate in the governance of the Arctic, so as to safeguard the common interests of all countries and the international community in the Arctic, and promote sustainable development of the Arctic,» the document reads.

In a comment made during Friday’s presentation of the document, Deputy Foreign Minister Kong Xuanyou underlined that China is «willing to conduct mutually beneficial cooperation on the development of Arctic shipping routes, infrastructure construction and marine research with parties concerned, especially the Arctic countries.»

«Some people doubt China’s participation in Arctic affairs and worry we’ll plunder resources and damage the environment. I think that worry is completely unnecessary,” he said, newspaper China Daily reports.

According to Arild Moe, researcher at the Norwegian Fridtjof Nansen Institute, the document enhances the impression of China as a global actor. «Indeed, the white paper is a comprehensive document which reflects a solid understanding of Arctic issues», he says in a comment posted on his institute website.

The white paper comes as China proceeds with the building of new icebreakers.  The country’s second vessel of the kind, the «Xuelong 2», is due to be ready for icy waters in the course of 2019. It is built by state shipbuilding company Jiangnan.

It is the the first domestically built icebreaker, and more is under planning, including the building of a nuclear powered icebreaker.

Chinese capacities in Arctic waters will increase, and it is all part of grand infrastructure development plans like the Belt and Road Initiative, as presented by President Xi Jinping in 2013.

«China hopes to work with all parties to build a “Polar Silk Road” through developing the Arctic shipping routes,» the new white paper reads.

The increasingly close relationship with Russia is a core part of China’s Arctic policy. The white paper mentions Russia only twice. But the two countries have a growing number of joint initiatives in the area. Among them are energy projects like the Yamal LNG and infrastructure projects like the Belkomur railway and the new Arkhangelsk deep sea port.

However, the Chinese relationship to Russia is complex and far from easy. Among the issues of Chinese concern is Russia’s nationalization of marine traffic along the Northern Sea Route.

In November 2017, President Putin announced that only Russian-registered ships will be allowed to carry oil products, as well as coal, along the route, and in late December, Russian legislators adopted the amendments, which come into force on 1 February 2018.

The new policy document shortly mentions all the other circus-polar states. Norway is referred to only once. However, the country’s far northern archipelago of Svalbard is mentioned repeatedly.

The Yellow River Station in Ny Ålesund at Spitsbergen was opened in 2004 and has since become a key foothold in China’s Arctic research,  and the Svalbard Treaty from 1920 provides the country with a potential expanded range of activity.

«Contracting Parties to the Spitsbergen Treaty enjoy the liberty of access and entry to certain areas of the Arctic, the right under conditions of equality and, in accordance with law, to the exercise and practice of scientific research, production and commercial activities such as hunting, fishing, and mining in these areas», the policy document reads.