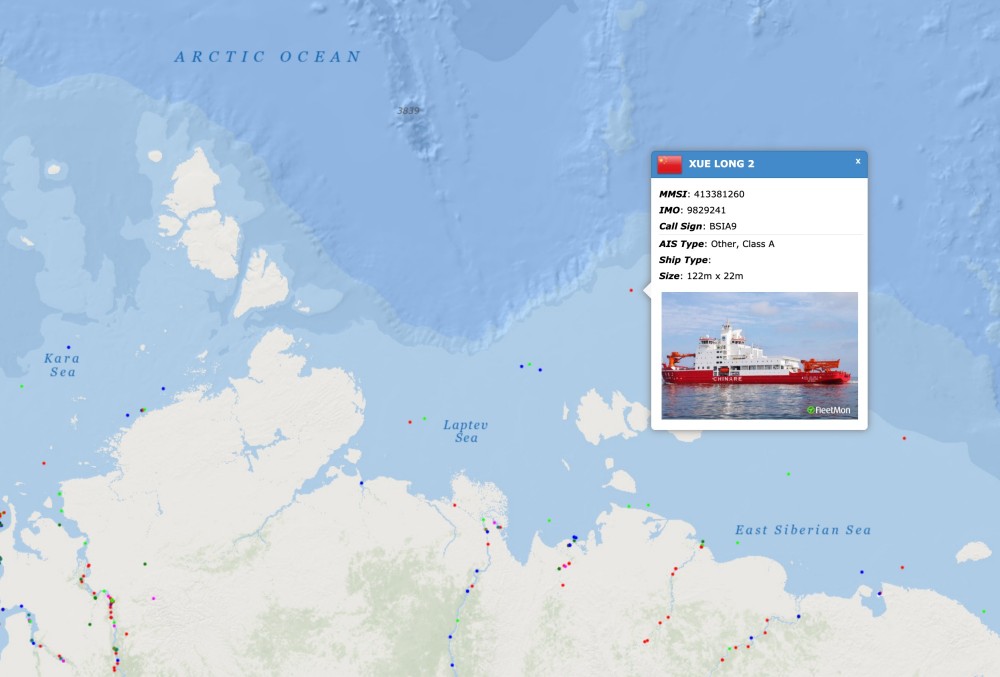 The Xue Long 2 in early August sailed north of the archipelago of New Siberian Island. Screenshot from ship tracking service by the Barents Observer

The Xue Long 2 (Snow Dragon 2) is on its second Arctic voyage during which it will conduct scientific surveys in the Gakkel Ridge.
Read in Russian | Читать по-русски
By

The 122 meter long vessel on the 12th of July set out from Shanghai on an odyssey across Arctic waters. In the course of 3,5 months, the icebreaking ship will sail about 15,000 nautical miles.

It is the first scientific voyage to the region during China’s 14th Five-Year Plan period (2021-2025), state media company CGTN informs.

On the 4th of August the ship was sailing north of Russia’s New Siberian Islands and two days later north of Severnaya Zemlya.

According to the Chinese, the Snow Dragon 2 will sail across the North Pole. On its way, it will explore the Gakkel Ridge in order to learn about the formation of rocks and magma and the geomorphic features there, CGTN reports.

The Chinese vessel is this week believed to have sailed south through the Greenland Sea, the waters that separate Greenland with the archipelago of Svalbard. The vessel is no longer visible on ship tracking services.

The researchers on board are reported to engage in monitoring of sea and sea-ice, atmosphere, microplastics and ocean acidification in the high seas of the Arctic, and carry out navigation observation, cross-sectional survey and satellite remote sensing.

The Xue Long 2 (“Snow Dragon 2”) is owned and managed by the Chinese Polar Institute. The institute has  been instrumental in all of the country’s previous 10 research expedition to the Arctic.

It is the second time that the Xue Long 2 takes part in the expedition. The ship is China’s first full domestically made vessel of the kind. Construction was competed in 2019.

The ship has advanced oceanographic and research equipment and can carry out a wide range of scientific expedition tasks.

Until now, it has been sister ship Xue Long  that has been applied on the Chinese Arctic expeditions, that have proceeded along Russia’s Northern Sea Route, across the central Arctic Ocean and through Canada’s Northwest Passage

In early 2018, the country adopted and Arctic policy document. It highlights joint efforts and cooperative approaches, and at the same time underlines that China is determined to participate in Arctic governance and that it has legitimate interests and rights in the region.