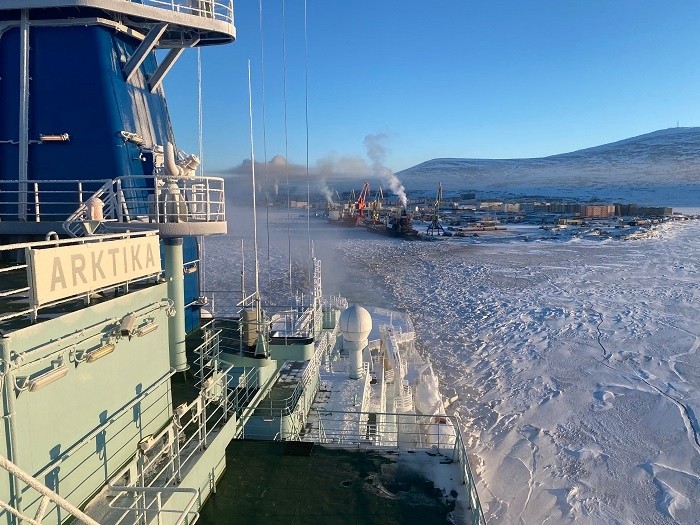 After two months in the ice, a nuclear-powered convoy breaks its way towards open waters

In late December, the Arktika sailed into the thick sea-ice of the Laptev Sea, and from there several thousand kilometres further east through the East Siberian Sea to the town of Pevek. It was the first voyage to east Arctic waters for the new icebreaker, the world’s most powerful.

On its tail the Arktika had three cargo vessels, among them the Polar King and Inzhenier Trubin, as well as diesel-powered icebreaker Dikson.

In Pevek, the cargo ships unloaded several thousand tons of good, most of it construction materials to the Baymskaya copper mining project, whereupon they froze into the sea-ice of the local port. They remained captured in remote town for several weeks.

On the 9th of February, the Arktika came to their rescue and started a unique several thousand kilometre long escort operation across the Northern Sea Route.

“This is a unique experience for us, which will be studied by ship captains and become a basis for the further planning of year-round convoys on the Northern Sea Route,” says Leonid Irlitsa, Deputy General Director of nuclear icebreaker base Atomflot.

By the 15th of February, the convoy was slowly approaching the Vilkitsky Stait, the waters that separate the Laptev Sea and the Kara Sea.  In addition to the Arktika and the two cargo ships, the convoy includes also nuclear-powered container ship Sevmorput and diesel-engined icebreaker Kapitan Dranitsyn.

Sailing conditions in the area are extreme. The thickness of the sea-ice in many places exceed two meters.

According to Rosatom, the nuclear power company that operates the state icebreaker fleet, the Arktika is coping well with operations. Escorts with the new LK-60 vessels (Project 22220) are far more convenient than with former classes of icebreakers, the company argues.

“The power, manoeuvrability, icebreaker capability and flexible ship draft are key advantages [and] the ship captains that have been escorted confirm that it is far more convenient to follow in the wake of one of new nuclear icebreakers,” says captain of the Arktika Vasily Gubkin in a comment.

The convoy is expected to make it into the Barents Sea in late February.

It has been a long voyage through the ice also for the Sevmorput. The 260 meter long nuclear-powered container ship in November sailed the Russian Arctic route loaded with equipment and metal structures for the nuclear power plant currently under construction in Bangladesh.

It started its return towards Murmansk from Vladivostok on the 17th of January and got icebreaker assistance as it entered the Bering Strait later that same month.

The Sevmorput is the world’s only vessel of its kind. It is itself able to break through up to one meter thick sea-ice, which is insufficient for the current conditions in the area.

The troubles started already in early November when more than 20 ships got stuck, and in January, four vessels became ice-locked after they delivered their cargo in Pevek.

Several shippers express strong dissatisfaction with the way Rosatom has handled the situation, and despite the repeated assurances from the Russian side, powerful industry representatives do not see the far northern shipping route as a commercially safe and viable passage.

In a comment to the Barents Observer, shipping company ESL Shipping underlines that infrastructure on the Northern Sea Route remains sparsely developed.

“In general we see a lot of potential in Russian Arctic but experiences from this voyage highlight that the infrastructure in the area is not as developed as it is in the Baltic Sea and weather conditions can change quickly,” company Communications and Sustainability Specialist Olli Tuominen said.

Several other companies have expressed major frustration with the way Rosatom managed the situation.

“Rosatom was not prepared and the company was not able to meet its contract obligations,” a company representative told the Barents Observer.