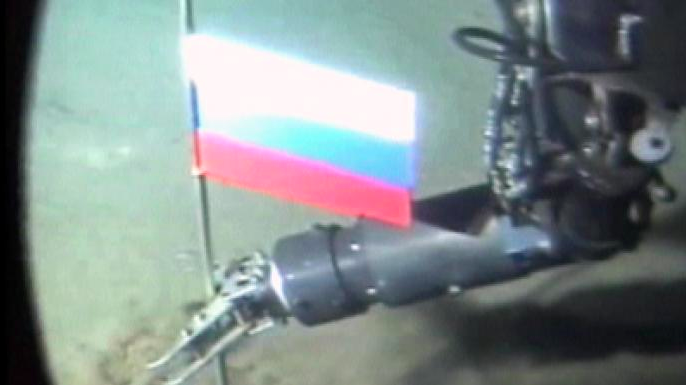 Russia wants bigger part of Arctic shelf. On August 2 2007, a Russian mini submarine staked the country's flag in the seabed at the North Pole, some 4,300 m under the surface.

Russia's newly adopted Marine Doctrine has a high stress on Arctic waters and the shelf north of the country's 200 mile Exclusive Economic Zone.
Read in Russian | Читать по-русски
By

Half a year after his massive onslaught on Ukraine, Vladimir Putin put his signature under the document that outlines Russia’s key strategic priorities in marine and maritime development.

The new Marine Doctrine is an updated version of similar documents from 2015 and 2001. Changes are significant.

The new document reflects the positions of a more assertive country in conflict with neighbors. It reiterates Moscow’s mantra about the USA and NATO encroaching on Russia’s access to resources and transportation routes. It also outlines plans for naval development, including the building of aircraft carriers and the application of civilian vessels for military purposes.

“Modern Russia can not exist without a powerful fleet,” Deputy Prime Minister Yuri Borisov underlined in a government meeting devoted to the new doctrine. “The document reflects the changed geopolitical and military-strategic situation in the world,” he explained.

The government meeting took place a month after the sinking of missile cruiser Moskva following a hit by Ukrainian missiles.

Putin’s new Marine Doctrine highlights a Russian ambition to become global player on the High Seas. And the Arctic is a key priority area.

Among the areas described as vital for Russian national security on the High Seas are the waters located adjacent to the Arctic coast, the Northern Sea Route, as well as the Arctic shelf.

In addition, unlike the previous versions of the document, the new doctrine also highlights the shelf north of the Russian 200 mile Exclusive Economic Zone (EEZ).

At the same time, it highlights the importance about convincing the UN Commission about the claims.

The UN Commission has worked with the Russian claims in the Arctic since Moscow in December 2001 made the first official submission of data. A year later, the Commission neither rejected nor accepted the proposal, but recommended additional research.

In 2015, Russia submitted additional information to a shelf sub-commission, and Russian government officials have since repeatedly expressed confidence that the issue will soon be solved in their favor.

On the backdrop of the claims lies the right to the mineral resources located below the seabed.

If the Commission fully decides in Moscow’s favor, Russia will be able to claim sovereignty over 1.2 million square kilometers of Arctic sea shelf that extends more than 350 nautical miles (about 650 kilometers) from the shore.

Moscow is clearly hungry for territorial expansion, and on the Arctic shelf it sees potential gains. Even without starting a war.

In addition to the Arctic, the Doctrine highlights Russian national security interests also in a number of more regions. That includes the waters adjacent to Ukraine. While the 2015 document with only few sentences mentioned the Black Sea and Azov Sea, the 2022 version devotes comprehensive attention to the area. Russia says it will “from all fronts strengthen geopolitical positions in the region.”

The document also highlights the ‘eastern Mediterranean,’ as well as the importance of Russian Navy base facilities in Syria.

It also devotes more attention to the Baltic Sea and refers the the “Baltic Strait” as region of special national interest.

Russia is winning support for its claims on Arctic shelf, says chief negotiator