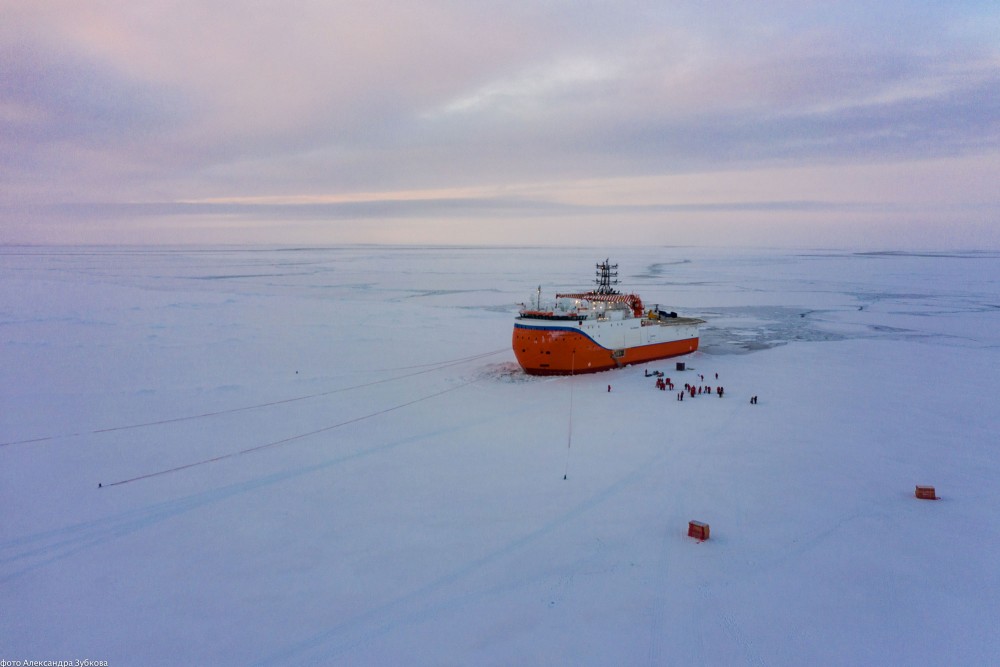 The "Severny Polyus" is capable of drifting autonomously for up to two years in thick Arctic sea-ice. Photo: aari.ru

The new Arctic research station has been moored to a 42 square kilometer big ice floe in remote Arctic waters and is now drifting westwards with the sea-ice.
Read in Russian | Читать по-русски
By

The unique Russian vessel, by its designers called a platform, was in the morning of the 2nd of October moored to an ice floe located north of the New Siberian Islands.

Various equipment, vehicles and machines was soon put on the sea ice and researchers set up the first field laboratories. The first research data has already been transmitted to the mainland, the Russian Arctic and Antarctic Research Institute informs.

The vessel is to drift westwards and ultimately end up in the Greenland Sea where the expedition will be completed. It is the maiden voyage for the Severny Polyus, a vessel that is built for up to 2 years long autonomous expeditions in the sea-ice.

The Severny Polyus is capable of undertaking geological, acoustic, geophysical and marine research under the harshest of Arctic conditions. Even in temperatures down to minus 50°C it is believed to be able to provide comfortable living and working conditions for researchers and crew.

On board are 15 labs where researchers can work year-round.

The 83 meter long vessel on the 2nd of September set out from St.Petersburg after two years of construction at the Admiralty Yard.

The main purpose of this year’s voyage is to test key equipment.

The first real expedition will start in 2023 when the Severny Polyus will sail into Arctic waters for a two-year expedition.

The research platform replaces Russia’s Arctic expeditions based on ice floes organised since the 1930s. The quickly vanishing Arctic sea-ice has made it increasingly hard to organise the expeditions and last real ice station, the “North Pole-40”, was held in the winter of 2012.

Albeit built for research purposes, the vessel could ultimately also be applied by the Russian military. The country’s new Marine Doctrine includes a high stress on use of civilian ships and infrastructure for military purposes. That could include not only trawler and icebreakers, but also the Severniy Polus.

The "North Pole" is on its way to the Arctic